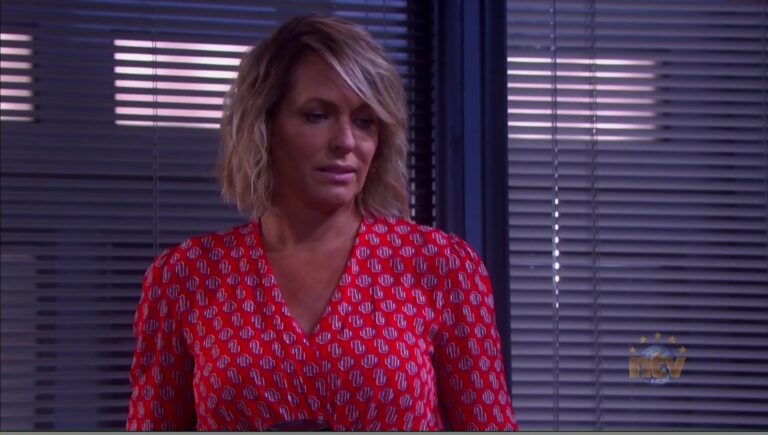 Days of our Lives has been on hiatus due to the 2022 Olympics since February 4. When it comes back, January 21, you’ll find out that Belle (Martha Madison) pays a visit to Jan Spears (Heather Lindell) who as it turns out is pregnant. Since she duped Shawn (Brandon Beemer) into sex (we call it rape) by morphing into Belle in December, it’s on our minds that she looks a lot further along than she should be. We believe these spoiler videos may be for the next 2 weeks or even take us into May!

Belle’s marriage is about to hit a little snag when #DAYS returns after the Olympics Monday February 21st on @NBC and streaming exclusively on @PeacockTV for FREE. pic.twitter.com/TELxCTJbUi

When the show is back, Sami (Ali Sweeney) and Lucas (Bryan Datillo) will also return from their trip together. Sweeney previews what’s coming up on Days when they’re back, with the help of Lucas and EJ (Dan Feuerriegel). Looks like this love triangle is just heating up.

Sami, Lucas and EJ promise plenty of romance and drama when #DAYS returns after the Olympics on Monday, February 21 on @NBC and streaming exclusively on @PeacockTV for FREE. pic.twitter.com/pKOQ9AKE9g

EJ gets a surprising new cellmate. He’s none other than Clyde Weston (James Read).
Sarah reads a romance book and wishes her man would come to get her. She decides to take action.
Abigail turns the tables on Kristen. She drugs her own smoothie and when Kristen takes a drink, she passes out.
Chad texts Abigail’s phone to beg the kidnapper to bring her home.

Gwen responds to Chad’s text to Abigail and tells him “Sorry, there’s nothing I can do.” She smashes the phone.
Chad threatens to kill whoever has Abigail, even if they’re family.
Xander goes ring shopping.

Maggie goes to see Gwen and tells her there was something off with Sarah’s visit. She didn’t seem like herself.
Maggie learns that Xander is moving on with Gwen and ring shopping.
Steve gets his patch back.
Steve and Kayla attempt to escape.
Chad visits EJ to ask where Kristen is.

Steve and Kayla are suspicious when they have a strange encounter with Sarah on the island.
Sarah has no idea who Steve is.

Tony doesn’t like that Chad sent their brother to prison.
Tony provides a promising lead for Chad.
EJ and Clyde have an uneasy reunion.

EJ doesn’t recall that Clyde double-crossed him.
Abigail reveals that it’s her fault that Sarah doesn’t know who she is because of the serum being given to her.
Sarah tells Steve and Kayla she’s Renee Dumonde and is in love with Tony DiMera.

Anna makes a pitch to TR.
Paulina goes to Abe with a request to help her protect Lani from her biological father, TR (Ray).
Kayla and Steve are stunned by Sarah’s story.
Eli returns home, and Lani confides in him about TR.

Chloe catches Craig with his hands on JoDevil’s glistening body.
Craig asks Chloe to meet his boyfriend who is coming to Salem. Tonight.
John has a swoony surprise for Marlena in her office on Valentine’s Day.
JoDevil eats Anna’s chocolates from Tony that he got her for Valentine’s Day.

Jake tries to give Gabi some Valentine’s Day love but she’s not going for it.
Jake realizes Gabi has something going on with Johnny.
Nicole reveals to Ava that she knows the brunette knows she and Rafe had sex.
When Rafe and Nicole confront Ava & the gloves come off. Ava denies putting Rafe in prison.

Nancy turns to Marlena for advice on her marriage issues.
Marlena explains to Nancy that she did nothing wrong, that Craig is gay and he can’t be converted and it isn’t a choice.
Johnny continues to drive a wedge between Gabi and Jake.
Chloe asks Brady for a favor.

Ben, Ciara, and Julie begin to realize that the devil is still in Salem.
Gabi deceives Jake, since she thinks he betrayed her.

More spoilers are on the way. Stay tuned as we update and feel free to join in the conversation with a comment or two about Days!