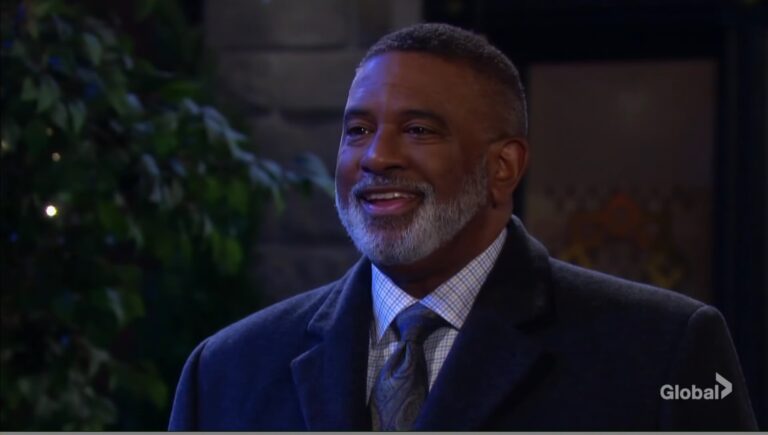 Soaps Spoilers’ Days of our Lives comings and goings 2022 reveal which actors will appear on the NBC soap, which are leaving, and which of them have changed their contract status.

William Christian, Ex Derek Frye from All My Children, joined Days of our Lives January 26 to portray the role of the financier of Johnny DiMera’s (JoDevil) movie. Christian is exiting DOOL during the week of May 9, 2022.

During his time on the show, we learned he had another tie to Salem in Lani (Sal Stowers), since he’s her biological father. This wasn’t Christian’s his first foray into Salem.

He also played a minion in 2018, in four episodes and is also known for his role as Dr. Marshall Redd on Another World.

With Dr. Craig Wesley leaving Salem, this means that Kevin Spirtas’ time on Days of our Lives has come to an end. Watch for his exit during May Sweeps.

Bruce Beatty will return to Days as Seth Burns. With Dr. Wesley leaving his new position as Chief of Staff, Burns will return, likely to give Dr. Kayla Johnson her job back.

Brock Kelly will be making a return to Days of our Lives the week of April 25 when (spoiler alert!) Allie-Devil (Lindsay Arnold) breaks Evan Frears out of jail.

Jackie Cox will make a return to Days of our Lives as herself on April 20. Many will remember her brief role on Beyond Salem or on Rupaul’s Drag Race.

Greg  Vaughan left Salem as Eric Brady in December 29  and he will be returning on April 15.

Matthew Ashford will be returning to DOOL as Jack Deveraux the week of February 21 and again on April 14 in a video chat scene with Xander (Paul Telfer). He’ll return again on Tuesday, April 19 with Jennifer, who will be portrayed by Melissa Reeves, who was last seen on February 24 when Abigail (Marci Miller) went missing.

Michael Varde will be portraying the role of Frank in a recurring stint on Days of our Lives. He’ll be in scenes with TR (William Christian) as a drug dealer.

Vanessa Williams returns to Salem as Dr. Valerie Grant during the week of March 14. For details about the story, check the in-depth Days spoilers. The actress will be gone after a few episodes. As of March 31, Val returns to D.C. for work.

Chris Kalhoon makes his return to Days as Ned the pilot on March 7.

Remington Hoffman is back as Li Shin returns to Salem March 7 for a DiMera meeting to vote on the new CEO.

George DelHoyo returns to Days of our Lives once again as Orpheus/Milo Harp. The actor makes his return  on Tuesday March 8.

Melissa Reeves will be making her way back to Days of our Lives to portray Jennifer during the week of February 21.

Donielle Artese will be taking on the role of Beth, TR’s (William Christian) ex-girlfriend on Days of Our Lives. Folks can see her in action in the below spoiler video for what’s coming on Days starting February 21.

Paulina needs some serious relationship advice when #DAYS returns after the Olympics Monday February 21st on @NBC and streaming exclusively on @PeacockTV for FREE. pic.twitter.com/vwMHBjRI6X

Greg Rikaart (Kevin  Fisher, Young and the Restless) is returning to Days of our Lives the week of February 21. We reported this after seeing him in the most recent cast photo from the Days‘ anniversary party. The Y&R/Days actor was last seen playing Leo Stark in Beyond Salem, and will be making his way to Salem once again and before then, viewers will see him in the new Christmas special, A Very Salem Christmas.

Here’s a little something to brighten your #DAYS! 🤩 pic.twitter.com/JIlH3iBe4O

Ali Sweeney returned to Days of our Lives as Sami Brady on November 19 for several episodes. She left again Monday, January 3 with Lucas (Bryan Dattilo). Bryan Dattilo returned to Salem Friday January 14. Sweeney was seen in photos back again taping at the show the week of January 31. Sweeney won’t start airing again until this summer.

Several months ago, SoapsSpoilers confirmed that James Read would be returning to Days of our Lives to portray Clyde Weston. He was seen in the new cast photo listed on the NBC Days Twitter page.

Clyde remains in prison currently, revealed ahead to schedule. The reason for his return is laid out in February sweeps for 2022.

Chuck Saculla will portray the part of Duke the Bear in a scene with Ava (Tamara Braun). Duke will appear on Days January 18.

SoapsSpoilers has learned that Kyle Lowder has already wrapped things up in Salem with this latest visit as Rex Brady.

Judge Kirk Barnes will be played by Jay DeVon Johnson the week of January 10 who will preside over EJ’s case.

Patrika Darbo is set to make a return to Days of our Lives as Nancy Wesley. She will be seen first on January 13. Darbo also portrays Sally Spectra, great-aunt to Sally Spectra (Courtney Hope) who soap hopped from Bold and Beautiful to Young and the Restless, where Darbo was seen last in 2021.

Linsey Godfrey appears as Days of our Lives as Sarah Horton during the week of January 10 and returns to Salem on January 19. Details about that in our Days’ spoilers.

Viewers will be seeing Kevin Spirtas return to Days of our Lives as Craig Wesley Friday January 21. He’ll be in scenes with Nadia Bjorlin (Chloe Lane) and Patrika Darbo (Nancy Wesley). Wesley was last seen on Days in 2009 when Chloe was in a coma, and then on the digital series, Last Blast Reunion in 2019.

SoapsSpoilers has learned that Ellen Crawford will appear on Days of our Lives as Mother Superior on January 13 in scenes with Steve (Stephen Nichols) and Kayla (Mary Beth Evans). Folks may remember her from Desperate Housewives, ER, Boomers, or Grey’s Anatomy.

Penghlis and Hunley return to Days as Tony and Anna on Friday, January 7.