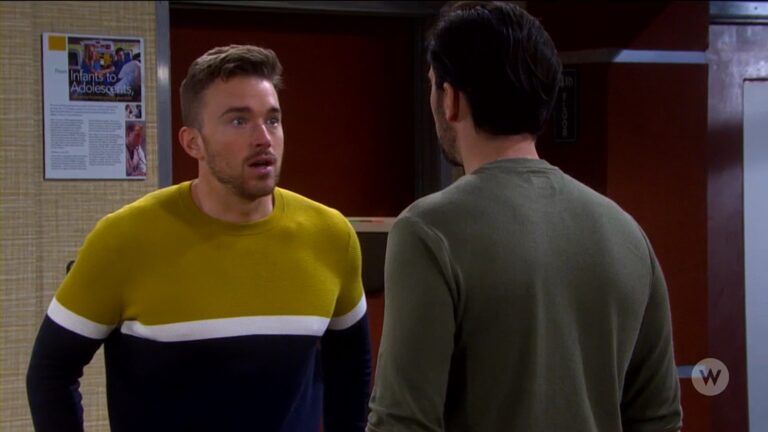 Days of our Lives Peacock recap for Thursday, September 23, 2022.

In today’s Days episode, Sonny pieces the newfound memories together and realizes Clyde really was his attacker, while Nancy’s ready to get married and Jada has a run-in with Nicole, before solving the case of who killed Abigail DiMera.

Jada arrives at Basic Black looking for Eric since it’s his first day of work. Instead, she finds Nicole who snarks at him asking, “What, did you bring him his lunch?”

Jada picked up his phone today by mistake and was returning it to him. Nicole assumes it happened when they woke up in bed together.

She can tell Nic’s not happy with her hooking up with her ex-husband. Nic shrugs and says she pictured her and Eric waking up in bed together.

Jada insists Nic’s bothered, which is interesting considering Nic’s still a newlywed and married to a great guy in Rafe. Nicole scoffs.

She’s merely being protective of Eric. She hopes he and Jada are right for each other.

Jada thinks she’s just waiting for them to fall apart. Nicole backtracks. Whatever they do isn’t her business.

They argue over Nicole offering Eric a job and that Eric never mentioned it. Nicole assumes Jada’s calling her a liar, but that’s not what she’s doing.

She thinks it’s time she left but Nicole wants to explain. Eric’s working there so why would she lie to her husband?

Jada comments that they’re in some sick competition for Eric’s love except that Nicole’s taken.

Nicole again tries to claim she’s only protective but Jada’s heard it before and is insulted that she’s implying she’s not good enough for Eric.

Eric appears and it’s obvious that things are tense between the women.

He exchanges Jada’s phone for his and she tells him she’ll see him at home. She kisses his cheek and goes while Eric asks Nic what happened. They discuss that and her lie and she says they really do need him to work for them at Basic Black.

Eric will do it as long as she’s honest with Rafe from this point on.

She will be. Eric asks why she’d lie to him about a silly dream anyway and then learns that the dream she had about Eric was a sex dream.

Eric’s surprised and then confesses he lied about his dream too.

His was a sex dream about her. She says, “It was just a dream, right?” It’s awkward and he goes.

Outside the pub, Chad and Nancy talk about Craig’s cologne and that he never wore vanilla. It’d be a little weird if he did since Clyde does. Chad flashes to smelling vanilla while hugging Craig and seeing Clyde behind him.

He realizes Craig’s not the killer. Clyde is. He says, “Oh my God!”

Nancy asks what’s wrong. Chad realizes that Clyde was there when he hugged Craig.

He learns Craig’s at the hospital for a drug test and Chad rushes off.

In Salem Inn, Chloe takes down some notes for work. Brady appears, his hand cramped from signing the custody documents, but he’s not complaining.

He has full custody of Rachel.

He kisses Chloe and wonders how it happened, considering the accusations that Kristen brought down on him.

Chloe admits that she found the judge outside the courtroom and showed her the surveillance video from Basic Black the day that Kristen tried to assault her. “I’m assuming she watched it.”

She didn’t tell anyone because she worried Kristen would use it against her or Brady.

She didn’t want Rachel to hate her for this.

Chloe sensed that the judge was frustrated with the whole situation.

Brady asks Chloe if he’s told her lately how much he adores her.

Because of her, he won’t lose his little girl.

Rafe and Craig head into the interrogation room at SPD. Rafe wants to know when Craig last saw Leo, and where he was when Sonny Kiriakis was stabbed.

Craig seems genuinely surprised at the line of questioning. Is Rafe accusing him of stabbing Sonny?

Rafe stares and Craig and says Rafe can’t believe he would take an innocent woman’s life, that he’d ignore his oath to do no harm.

He wasn’t even in Salem when any of this happened. Rafe wants an alibi, but Craig can’t recall where he was.

Jada arrives at work and Rafe tells her that he believes Leo’s innocent.

He asks Jada to look over the evidence once more.

As Jada’s looking at the police footage of Clyde at the docks, she notices an issue.

Clyde looks in on Sonny through the window at the hospital. He flashes back to stabbing Sonny in his office. Will calls his name and asks why he’s there.

Clyde tells him about his random drug testing which is part of his parole.

He thinks Will should understand that but Will doesn’t. Clyde remembers Will’s conviction was overturned.

He asks if Will remembers them being in jail together. How could Will forget? It’s where Clyde tried to shiv him but then shivved Ben instead.

Clyde calls it amazing how ‘Ollie’ turned his life around. He claims it’s what he’s trying to do. 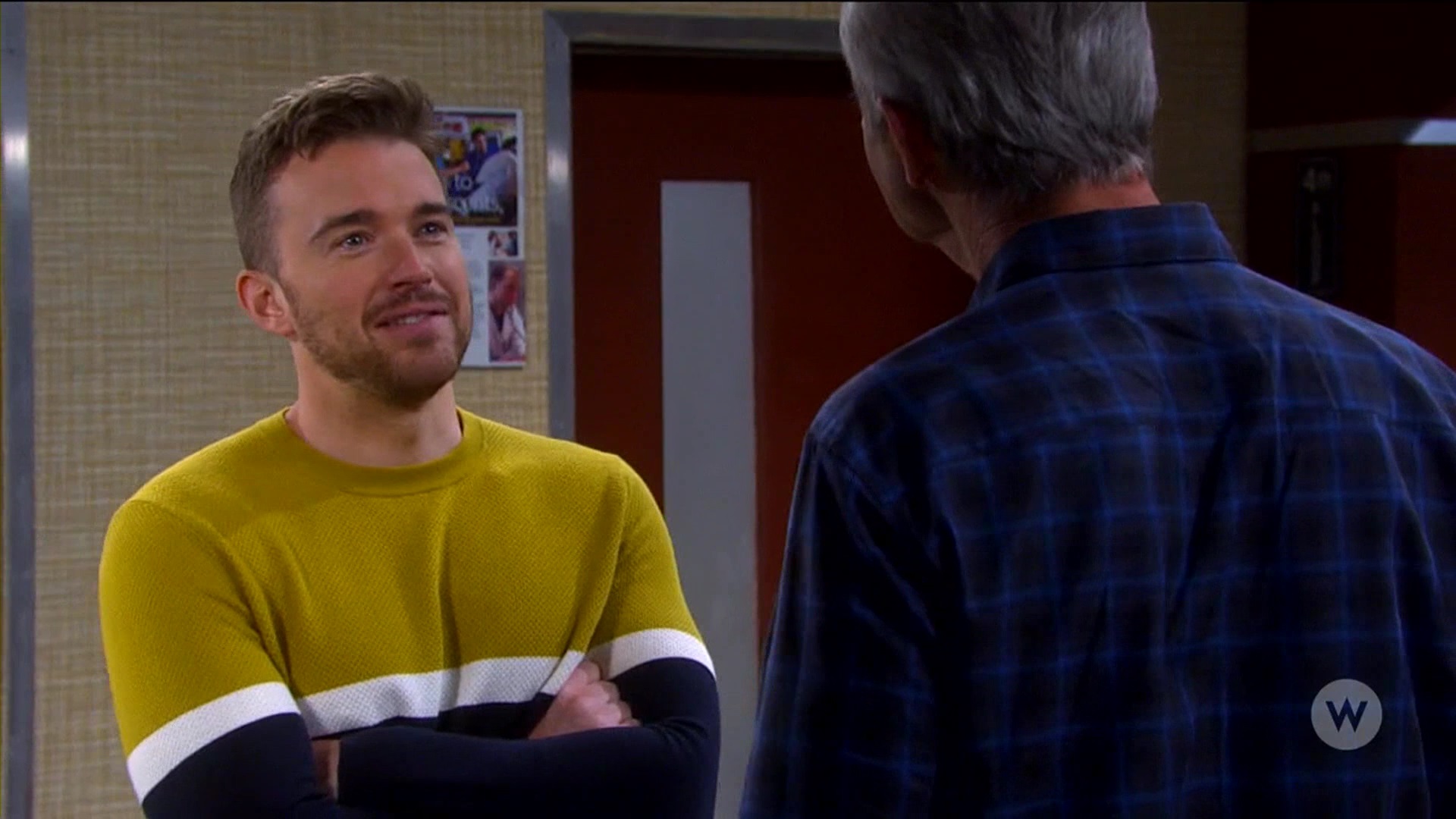 He’s “gettin’ hitched” today at City Hall and tells Will to take care of his husband.

He’s glad they caught his attacker.

It must be a relief to know scum like that is off the street.

He goes and Chad appears and tells Will that he thinks the murderer and Sonny’s attacker has been Clyde Weston all along.

He tells Will about the vanilla-scented cologne and Will agrees.

He goes to wake Sonny up and fills him in on Clyde being the one to stab him and murder Abigail.

Chad asks him to see what else he can remember from the night of his attack.

Sonny recalls hearing a noise that night and he turned around he saw Clyde’s reflection in the glass of a painting on the wall.

He wonders why Clyde would do any of this.

Will knows there’s surveillance footage of Clyde fishing at the docks.

They wonder about that and Chad says he’ll tell the cops, but he asks where Clyde is and learns he’s headed to City Hall to get married.

Once he’s gone, Will and Sonny discuss Clyde being Abby’s murderer.

Back at Salem Inn, Brady and Chloe kiss some more and are about to have sex since they have an hour until Rachel gets out of school when there’s a knock on the door.

Nancy lets her daughter and Brady know that she and Clyde are getting married today.

Chloe finds it fast but Nancy says there’s no reason to wait. She asks them to put on something nice so they can be her witnesses.

Craig arrives and Nancy invites him to her wedding. He’s not sure he can do it.

He’s not in a festive mood. They discuss Leo accusing him of murder. Nancy says Clyde was unfairly accused and thinks her ex will be as well.

She just wants today to celebrate her wedding and invites him before she goes off to dress.

Craig tells Chloe he’ll go get ready for the wedding. Chloe worries it’s a bad idea for him to be there but he wants her mama to be happy.

Chloe’s concerned about Clyde and wants her father to help stop the wedding.

At Horton Square, Clyde pins a boutonniere on his lapel and pokes himself in the finger.

His finger bleeds a bit. Nancy runs into Craig outside of Salem Inn and covers her face, citing it being bad luck before the wedding to see the bride.

Clyde laughs and assures her nothing will stop them from sharing their lives together.

Back at SPD, Jada shows Rafe the time stamp on the docks footage was changed and that Clyde has no alibi for the day Abigail was murdered.

Chad goes to the DiMera mansion and opens the safe. He takes out a gun.

Note to readers: We’re running a test to see if enough people are interested in reading daily Days of our Lives Peacock recaps.

If there are enough to continue once again with the DOOL recaps, we’ll go ahead with it. If not, we’ll add them in point form in the Days spoilers again.