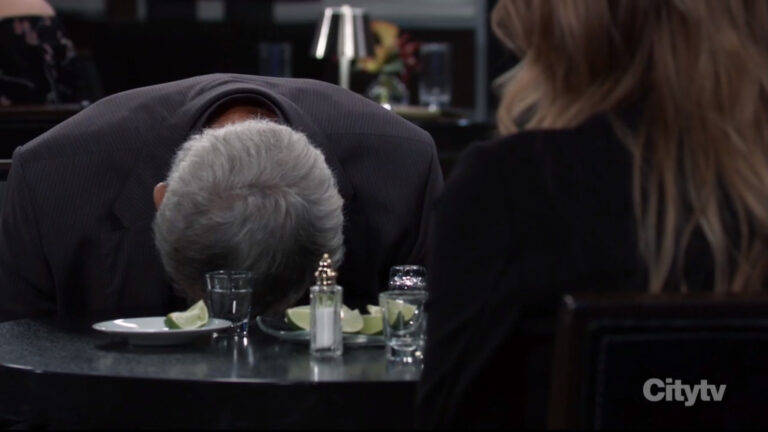 General Hospital recap for Wednesday, November 23, 2022. In today’s GH episode, Sonny confronts Drew about his relationship with Carly, Carly confronts Nina about being a gossip, and Valentin gets an idea to clear Anna.

We also have Tuesday’s GH recap where Brook Lynn threatened to expose Linc so offered her a deal, Robert got the necklace, and Britt told Obrecht she’s sick.

Drew is working out at the gym when he gets a call from one of his reporters.

They have tracked down the last location of one of the communes Willow belonged to.

They’ve vanished. He encourages her to keep digging.

Sonny startles him and says it sounds like he’s hit a dead end.

Drew explains he’s looking for someone who can remember Willow’s biological mother.

He recaps what they know about Willow’s past in the commune.

Sonny is surprised she wants to dig into this after avoiding them for years.

He’s also surprised that Michael went to Drew to ask him for help with this.

Sonny brings up Carly feeling compelled to tell him that they are together.

He claims he is happy for them.

“Do you mean it?” Drew asks. Sonny does. Drew assumes he has mixed emotions.

Sonny claims he only wants what’s best for Donna’s mother.

Carly immediately confronts her about going to Sonny with the suggestion that she was having an affair with Brick.

They step into a corner and Carly lectures her for throwing accusations at Willow too.

Her gossip isn’t helping anyone.

Nina claims she was only worried about Wiley growing up in a broken home.

“The only homewrecker I know is standing right in front of me!” Carly says.

She claims she could care less about Sonny and she’s welcome to him.

But it’s different when she comes at her family.

Nina reminds her that she no longer ones this hotel and it is thriving without her.

When Carly spots a waitress carrying soup, Carly grabs it and threatens to dump it on her.

Drew and Sonny interrupt and split up the women.

Drew wonders if Carly objects to him helping Willow find her biological parents.

She flashes back to learning Nina is her mother and then lying about it.

She insists to Drew that he let her handle this.

Diane finds Robert sitting at a table and asks if they can finally have their drink.

She begs for a look but he refuses.

Holly arrives and spots them together.

She calls Victor to tell him what she needs to get the diamonds before the WSB arrives.

She interrupts them and Robert makes introductions and then Holly leaves to powder her nose, suggesting Robert order them a round.

Once she steps off, Scorpio tells Diane that his ex can be quite lethal.

Holly meets with Johann at the bar and he hands her something.

She heads back to the table and does a shot.

As he explains how to do a tequila shot, she swaps out his saltshaker with one she got from Johann.

He doesn’t notice and dashes the salt, licks it, and does the shot.

Robert suddenly falls face-first on the table. He claims he’s okay, but Holly says he needs to go and sleep it off. She helps him to the elevator.

Diane looks around confused. On her way out, she says hello to Nina and Sonny.

When she heads for the elevator, she calls Robert to say she has a bad feeling about leaving him with Holly.

He stumbles off the elevator and his briefcase is gone.

At Kelly’s, Chase asks Dante about the letter Brook Lynn was supposed to write for him.

The cop explains he asked her to write a letter for the civilian complaints review board to help get him reinstated. This was weeks ago.

There’s a rush to get it since the hearing would have to be soon. Chase wonders if she ever intended to write the letter.

His friend urges him not to dredge up trouble. Chase thanks him for letting him know about this.

At the bar, Brook Lynn asks if Linc is really willing to give her songbook back to her in exchange for keeping her mouth shut about his sexual harassment.

He reminds her that they don’t work in a corporate environment, and this isn’t an HR issue. Linc repeats his offer.

He adds that he needs more than her silence. Instead, he wants her to paint a flattering picture of him for PR.

She thinks he’s scum but he points out she won’t get a better deal than this.

If she defends him now, she can help prevent future problems for him.

“If you really believe in Chase, you can do this,” he says.

She didn’t think he could sink this low so he reminds her of what she could lose.

Chase interrupts. Brook Lynn tells Linc that they are good and leaves with her boyfriend.

At General Hospital, Britt tells Liesl that her Huntington’s has started to progress and affect her.

Obrecht offers to fly her to a specialist. Her daughter says this won’t go away.

Britt explains that she has already met with Dr. Tallone and has moved on to stage three.

Austin supported her through the meeting.

The doctor said she may live for five to fifteen years but will likely need full-time care in eighteen months.

They embrace in tears.

Liesl explains that her medical training comes more naturally to her than being a mother. She deserves a mother who can say and do the right things.

In tears, she blames herself for this. Britt says it is not her fault or her father’s.

Obrecht insists they can’t let the disease win this easily. Taking her hand, Britt tells her embrace her love with Scott.

Britt needs time alone to deal with her condition.

Valentin is surprised when he finds Martin on the pier. The lawyer stands with a hummingbird cake and misses Lucy.

He lights a candle and remembers her. “Your girlfriend murdered mine,” he tells Valentin.

They argue about the evidence against Anna. Martin is sure innocent people don’t run.

Valentin says he’s doing his part to try and clear her.

The lawyer is unconvinced. His judgment is questionable at best. Martin makes a wish for Lucy and blows out the candle.

They eat the cake and still feel bad that their girlfriends are gone. Martin is losing the ability to hope.

Valentin is sorry. As they discuss the shooting, the Cassadine realizes that there were two shots but only one casing was ever found. If he can figure out why, maybe he can save Anna.

They hurry off together.