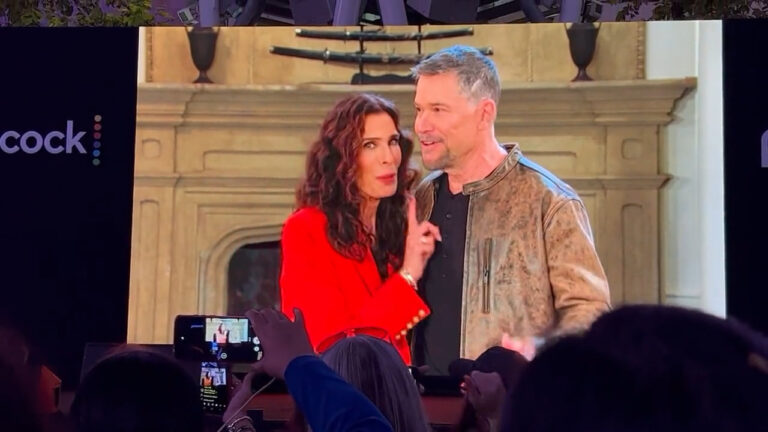 Two fan favorites back for a special!

Days of our Lives viewers never thought we’d see the day that Kristian Alfonso (Hope Brady) and Peter Reckell (Bo Brady) would return to Days, but then they both appeared in Beyond Salem.

Both actors stated they wouldn’t return and definitely not to the main show.

It looks as though Bope’s ship hasn’t sailed just yet and during the Day of Days fan meet and greet, we learned that both actors are returning and this time it’s to Peacock.

The duo was standing in the DiMera mansion set as they thanked fans for coming to Day of Days and apologized that they couldn’t be there. Alfonso stated, “We wanted all of you to be the first to know that we are back…no you tell them.”

Peter said, “We’re back taping here at the studio.”

Take a look at the video, posted by @nicolsevansfan on Twitter.

At the end of Day of Days, we always come to expect an explosive spoiler promo and this one did not disappoint.

And as we suggested when we reported that Steve Burton was returning as Harris Michaels, Megan Hathaway’s (Miranda Wilson) returning. Thank you @nicholsevansfan for posting this on Twitter.

Leo takes out a laptop and says what he’s about to show you is going to blow your mind. Johnny and Gabi fight with Dr. Rolf, Nicole gets a slap across the face from a blonde with Eric standing by.

Kristen hits Xander, Stefan and Gabi tell each other they hate one another and then Gabi smacks Stefan across the head with a frying pan.

Meanwhile, Alex and Stephanie have sex, and a bomb goes off at the town square while holiday shoppers such as Eric, and Brady are nearby, wondering “What was that?”

Chanel tells Allie all about hearing a woman scream, “lying there in a pool of blood.”

The woman killed, according to Sloan, was her mother. She reveals this to Abe and Paulina.

Eric tells Brady that Jada’s pregnant, and Jada rolls around in a hospital gown while later, Nicole asks her why she’d want to have a baby that ties her to him.

Eric tells Nicole that “this pregnancy is none of your damned business.”

Kristen learns that someone stole the orchid and the fallout is great.

Brady tells Kristen that if anything happens to those women, it’s on her.

Kate says she loves Roman before she flatlines, Kayla dies, and so does Marlena.

Stephanie sobs on Steve’s shoulder that she didn’t get to tell her mom she loved her.

Allie, Belle, Will and Eric stand in the church and pray.

The women are shown in their caskets but they meet in heaven.

Steve and John enter a door, guns are drawn, and see…Hope Brady, with her gun drawn.

Hope’s seen kissing Harris (Steve Burton), and Ciara (Victoria Konefal) busts in on them. “What the hell is going on here?”

Megan finds Bo awake and asks if he can say something.

At the hospital on Christmas, Xander and Sarah kiss, wearing Mr. and Mrs. Claus costumes.

Johnny and Wendy kiss, Will (Chandler Massey) returns and plants one on Sonny, while Rafe and a date (looks like Jada?) watch fireworks together.

A few others kiss and at the end, Nicole wakes up in bed with EJ! “Good morning Sunshine,” he says.