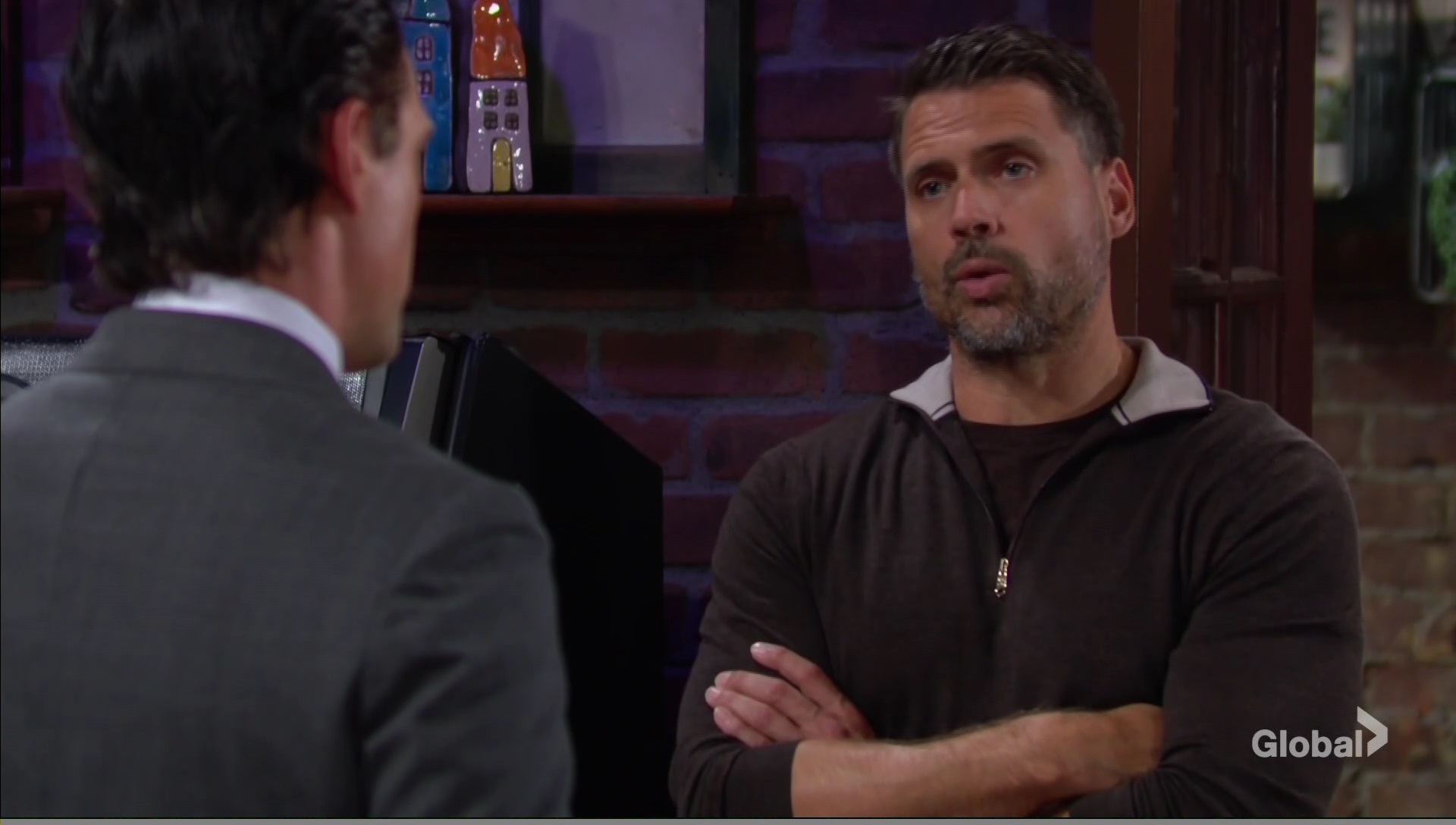 The Canadian Y&R day ahead recap for the Friday, September 3, 2021 episode, which airs in the USA Monday, September 6. In the previous episode, Mariah wanted to nurse Dominic. In this episode, Adam and Sally hit the reset button on their relationship, Mariah has a tough time feeling safe, and Victoria asks if Ashland has any other secrets.

At Crimson Lights, Billy tells Victoria she missed a doozy of a party last night with the exception of Sally Spectra, who wasn’t afraid to take on the big dogs. Victoria asks what she did now. Billy fills her in on the spectacle. Victoria doesn’t care. She spent quality time with their children. He asks how her beau is and she shrugs. Why does he care? He’s still going forth with the article about his history. He tells her they’ll be fair and unbiased. He thinks that she can tell Ash is hiding something big. She tells him to stay out of his life, their lives. When she goes, he calls out asking her where the money came from that Ashland used to buy the TV stations. Outside, Devon and Nick discuss Dominic’s birth and Devon looks uneasy as Nick thinks he looked like a hero. Nick appears as Victoria stomps out and asks Billy what’s going on. Billy shares what they discussed and they argue about what Ashland is hiding. Nick says he’s got nothing except a desire to find something damning about Ashland. Billy says this is about protecting his kids. He says Victoria can take on Ashland as long as she knows what she’s up against.

Adam stops by the park after seeing Sally bent over tying her shoe. She says good morning and grins at him. He looks awkward and tells her to relax. She hopes there’s no meme of her drenched going viral. Adam shares that the night was a success, even if everyone got a little drama. Adam says they’re good. “So…dinner then?” Sally asks as Chloe eavesdrops. Adam tells her she missed the party last night. They fill her in on last night’s events with her throwing a drink in Phyllis’ face and getting a bucket of ice water over her head for it. Chloe blames Adam for not ensuring it didn’t happen. Adam isn’t surprised she’s once again blaming him. He takes off on his run. Chloe asks what else happened and Sally denies anything. Chloe saw photos of her on his arm. How far did things go? Sally admits it was an impulsive kiss. She initiated and Adam hit the brakes. He told her he was toxic. Chloe asks if that gave her pause. Sally thinks it’s a sign of growth. “Like a fungus or a wart?” Chloe doesn’t get that her friend has such good taste in clothes but to men.” Chloe knows she can’t stop her from pursuing things but warns that his son thinks his parents are still together. Whatever connection she thinks she has will get messier before it gets easier. Sally nods.

At Chance Comm, Elena gets the documents from Lily to sign and is upset that Newman Media tried to poach her. Elena tells her not to worry. She’s ready to sign with them. She admires Lily. She signs the papers and they decide to go out for long-overdue girl talk.

Victor and Sharon talk at the Chancellor house, which is filled with celebratory cupcakes and paper decorations. Nina and Ashley turn up with presents. They discuss what Stitch did and are glad everyone’s safe and sound. Nina wishes she could talk to Chance. Victor welcomes Ashley to the grandparents’ club and Sharon gets the door to Devon who has piles of presents.

At the hospital, Mariah worries and asks Abby if the police have found Stitch yet. Abby says they haven’t but assures her that they’ll be safe at the mansion. Once alone, Tessa asks how Mariah’s doing. She’s anxious to leave there. “I felt safe here and Bowie was right down the hall.” She knows the dynamic will change once they leave and she’ll have to remember to call him Dominic. She tries to assure herself it’ll be okay. Abby reappears. The paperwork is taken care of. “Let’s take our baby boy home.”

At Society, Ashland writes Nate a huge check for the supplements he gave him. Nate thinks it’s ridiculous. They didn’t cost much. The money isn’t for Nate, Ash clarifies. It’s for half the new wing at the hospital. He heard Nate was fundraising. Nate’s blown away and thankful. Victoria appears as Nate takes off. Ash finds Nate impressive. He hopes she doesn’t mind them getting together with Nate and his girlfriend. Victoria’s into it but upset that she had a run-in with Billy, who seems hell-bent on finding something damaging in Ash’s past. She asks if there’s anything else that he thinks she should know about. Ashland says he’s been ruthless and hasn’t broken the law. He defies Billy or anyone else to prove otherwise.

Mariah, Abby, Tessa, and the baby arrive. Abby welcomes Dominic to his new home and family as Mariah looks around, worried. She introduces him to her mom and “Chance’s mom, Nina.” Victor tells the baby that he’s born into a loving family. He’ll be spoiled. Victor calls Abby the perfect mother. Ashley holds the baby and they all thank Mariah for keeping them safe. Nina asks how she got through it. She says she was lonely and when Ash asks why Stitch did this, Mariah stammers. Tessa thinks she could use some air after everything she’s been through. They leave and the women all discuss how proud they are of her. Sharon doesn’t think they can disregard the severity of what she’s been through. Meanwhile, at the park, Mariah and Tessa discuss how she feels after being held captive with the baby. She feels a bond with him and thinks Dominic feels it too.

Lily talks about being grateful to give jobs to the women she was in prison with. Elena pats Lily on the back and Lily talks about how hard prison was. She tries to see Maddie and Charlie as much as she can and hopes they return home one day. She’s glad Devon and Nate are back together. Elena still feels guilty about that. Lily’s happy she’s a part of their family. They talk about Devon being a dad, “But he’s not.” They want to congratulate him but think it might be wrong. Lily thinks everything will work out fine.

Victor walks in on Nick and Billy’s argument about Ashland in Crimson Lights. He tells his ex-son-in-law that it’s none of his business. Billy thinks they’re on the same page on this but Victor doubts that. He hears that Bily was sneaking around his private suites last night and tells him not to do it again. Billy goes and Vic says he didn’t want Billy to know Nick was the one who caught him. Nick thinks Billy will do all he can to keep Victoria from getting hurt, and he’s interested in keeping him in the loop. Victor is glad. He can’t stand the guy. He wants Nick to play a double agent and report back to him when he talks to Billy. There’s something about Ashland that he doesn’t trust. He wants everything in the open before the wedding. “If there is a wedding.”

Sally spots Adam at Grand Phoenix. He was meeting with an advertiser. He hopes she doesn’t think he’s stalking her. She just came to change in the gym. She wants to hit the reset button and go back to the way things were before the kiss. She reveals Chloe keeps reminding her that he’s not for her and today reminded her that his son is in the picture. Sally doesn’t want to come between them. Adam admits he was thinking of his son when he stopped things. They still agree to go to dinner and instead, make it a working one.