Home » Days of our Lives » Recaps » Ciara Wakes Up With Amnesia and Tells Ben, “You’re Ben Weston, The Necktie Killer!”

Days of our Lives Recaps

Tuesday, March 16, 2020: On today’s full episode recap of Days of our Lives, Sami makes a big reveal to Lucas, Shawn learns Ciara’s out of surgery, and Allie wants to see her mama.

From his hospital bed, Shawn calls the DA to rant bout persecuting Orpheus and Maddox. Belle appears. They commiserate over Ciara. Marlena arrives and tells them his sister’s out of surgery. In the hall, Ben coughs up a storm while he and Claire wait for word on Ciara. Claire urges him to get examined. Kayla arrives and Shawn rushes out in crutches. Kayla admonishes him for being up and says that they repaired the internal damage and Ciara should make a  full recovery. Ben wants to see her and though he’s allowed, he can’t stop coughing and hacking. He passes out and dreams that he has had a wonderful reunion with Ciara. Once he’s awake, Kayla says his lungs are weak from the smoke inhalation. Claire rushes to him. Kayla forces him to keep an oxygen mask on, though he’s antsy to see his wife. In Shawn’s room, Marlena calls to leave a message for Hope that Ciara is found and doing well out of surgery and then asks why Belle’s throwing Sami to the wolves. Belle says she consistently lies to her. Shawn visits Ciara. She’s awake and he tells her she was in an accident. She’s confused. When he asks if she knows who he is she says he has solid cheekbones, and nice fluffy hair, and a grumpy expression on his face. He starts to laugh. She knows who he is. Shawn Douglas. They share a laugh. Shawn’s happy to see her. He tells her it’s St. Patrick’s Day. He thinks her being well is the luck of the Irish. She asks where Hope is. Shawn will track her down. But there’s someone else dying to see her.

Related: Linsey Godfrey out at Days

At home, Allie frantically searches for her phone. She reads an alert about Sami being charged with Charlie’s murder. Nicole is surprised Sami is keeping quiet. She’s never quiet. Allie wants to talk to her but admits Rafe won’t let her. Nicole will help Allie talk to her. “I can handle Rafe. Maybe he can turn you down, but there’s no way he can say no to me.”

Rafe finds Sami twiddling her thumbs in the interrogation room. She has a visitor. Lucas says he’s not going anywhere until she tells him everything. Sami says she hopes Charlie rots in hell. Sami says their proof is circumstantial and the DA has one problem with their case. “I’m innocent,” she reveals. Outside, Allie and Nicole arrive to see Sami. Rafe tells them that Ciara’s been found. They’re ecstatic. Rafe tells them to go celebrate since Lucas is with Sami and after he leaves, she’ll meet with her lawyer. Nicole makes him promise to call when Sami is available. Back in the interrogation room, Sami tells Lucas she flew from Italy and couldn’t stop fuming for ten hours over what he did to their daughter. She went to Charlie’s apartment from the airport and was determined to hurt him. She knocked on his door but there was no answer. She turned the knob and the door opened. It was quiet and dark but she knew something was wrong. She felt fear, much like the fear she felt when Alan Harris raped her. Nobody knew she was there and since he was a rapist, she worried about what he could do to her. Sami cries as she explains. She turned on a light, suddenly ready to make him pay. She saw a gun on the floor and then when she looked up she saw Charlie on the floor dead. She was mad that she didn’t get revenge so she shot him again and dropped the gun. She didn’t tell anyone the truth because she thinks Allie shot him. Sami would rather be the one arrested. Lucas gets it.

Shawn goes to the hub and tells Ben, Claire, and Allie, who has just arrived, that Ciara’s up and talking. Ben rushes to be with her while Shawn goes to tell his wife and mother-in-law. While the men are gone, Claire says it wasn’t long ago that she and Ciara hated each other. She misses her so much. Allie is glad they’ve one thing happening in their family that’s good. Claire’s sorry that Sami was arrested. Allie blames herself. Claire asks if she killed Charlie Dale. Meanwhile, Shawn interrupts Marlena and Belle to tell them the good news about Ciara. They’re thrilled.

Ben sits by Ciara’s bedside and when she wakes up, she notices he’s holding her hand. He kisses it and she starts freaking out. “I know you. You’re Ben Weston. You’re the Necktie Killer!” (Some of you DMd me on Twitter to ask about this – Ciara has Retrograde Amnesia – which means she is missing some time but remembers her family.)

Related: All those turtlenecks on Y&R

Nicole and Rafe walk through the square drinking coffee. She tells him she thinks he’s up to something. He’s purposefully keeping Allie from Sami. Rafe admits it. If Sami killed for Allie, she’ll have to carry that around with her for life. Rafe’s trying to protect Allie. Nicole’s touched. He’s a good man. Rafe gets a call with new information on the murder case.

Join in the conversation with a comment or two and feel free to like and follow Soaps Spoilers on Facebook and Twitter. Take a peek at this week’s daily photo spoilers in our gallery below, and let us know what you’re looking forward to most! 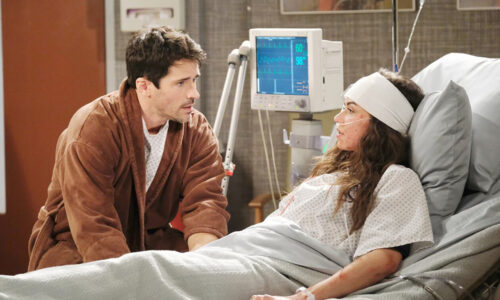 Shawn visits Ciara in the hospital after she was rescued by Ben. 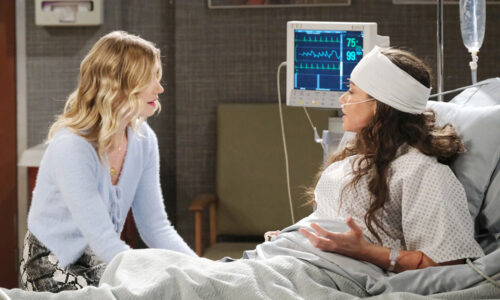 When Claire rushes to be with Ciara after being rescued by Ben, Ciara lashes out at her niece. 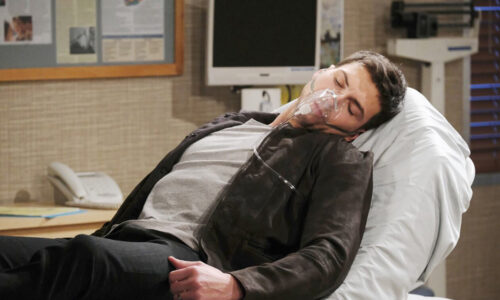 Ben rescues Ciara and brings her to the hospital but once he's inside, he needs to be put on oxygen. 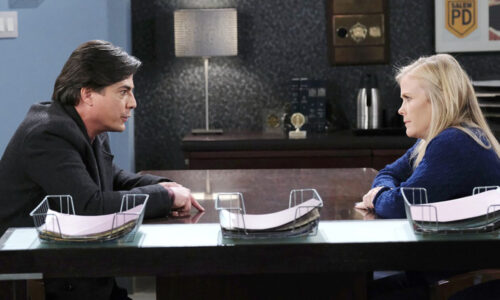 Lucas visits Sami in jail and she confesses everything that happened the night Charlie was murdered. 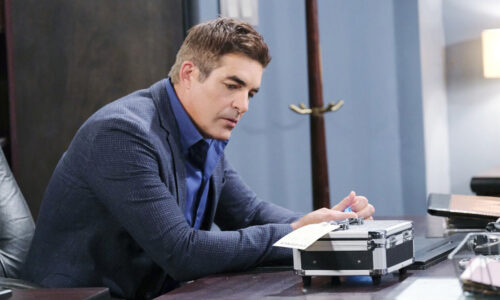 Though Sami is still being held for questioning, Rafe comes upon another suspect in Charlie's murder.

Rex and Kristen as Sarah

Kristen buys a Sarah mask and feigns being the doctor. When Rex returns to Salem, it's clear he still has feelings for Sarah. He thinks he's having sex with Sarah but doesn't realize Kristen is raping him. 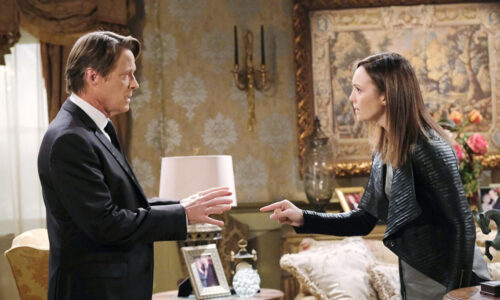 Jack's shocked to his core when Gwen reveals to him that his daughter Abigail kidnapped her. 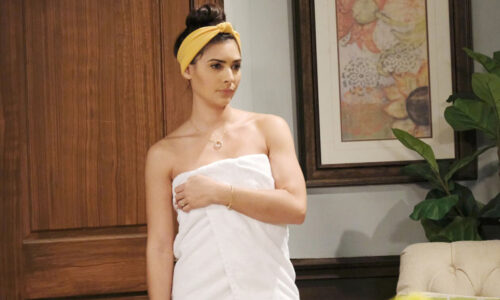 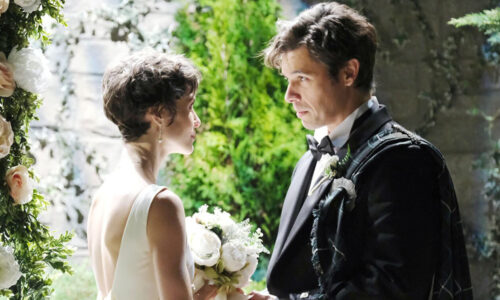 Xander and Kristen as Sarah

Xander and Sarah's wedding week should be a thing of joy, but because Sarah has been kidnapped by Kristen and Kristen has taken her place, pretending to be her, it doesn't look like Xandy or Sarah are getting their happily ever after, at least not yet! 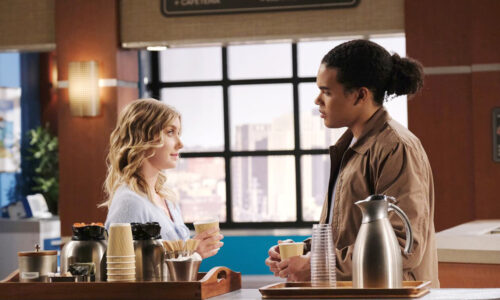 Claire and Theo meet up as he returns to Salem from Africa.

Christine Fix is the owner and publisher of Soaps Spoilers. She writes editorials, recaps, and a weekly opinion column about the NBC soap, Days of our Lives, and the CBS soap, Young and the Restless. To learn a little about her background, visit our About Us page.

Days of our Lives News

Ben Kidnaps Ciara Before She Can Marry Theo, While Ej Reacts to Learning Sami Cheated on Him

Recaps The Young and the Restless

Mariah Begs Her Captor, Nate’s Gets the Job Stitch Says He has — & Phyllis Records Sally & Tara Arguing About the Text

Jul 27, 2021 Chrissi
Recaps The Young and the Restless

Jul 26, 2021 Chrissi
Recaps The Young and the Restless

Kyle Confronts Phyllis, ‘What Are You Doing to Tara’, While Sharon Has Adam on the Mind