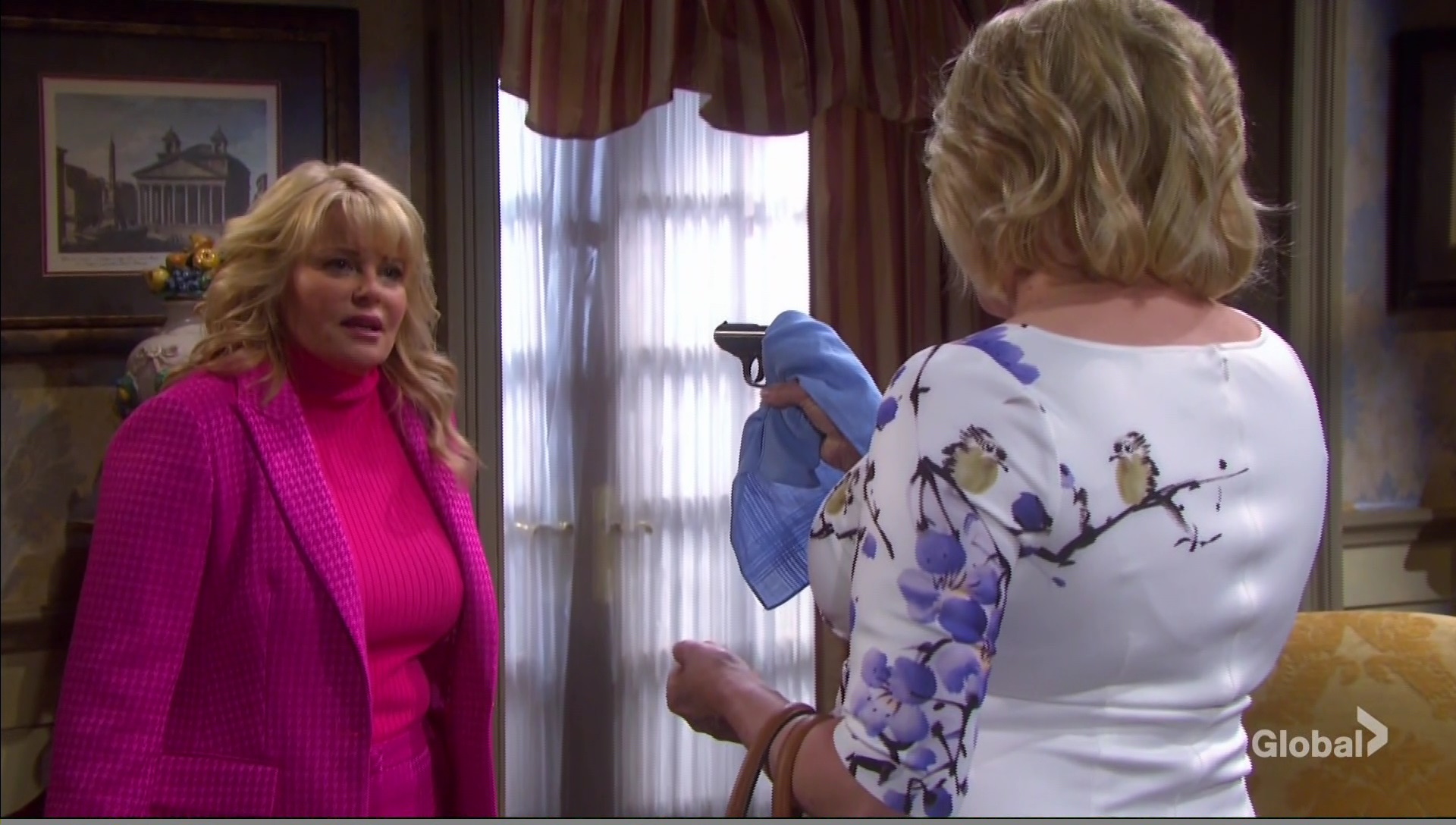 In the Friday, August 27, 2021, full episode recap of Days of our Lives,  Calista Lockhart shows up in town, Johnny and EJ argue and Tony is shot down by EJ. If you missed out, Soaps Spoilers has you covered with this Days recap from Thursday: Steve forgave Ava for raping him, kidnapping his wife, and murdering his father-in-law.

At the hospital, Allie has had a doctor’s appointment for Henry and tells Kayla that Henry’s a year old and in the 98th percentile for height. She tells Kayla about not returning Tripp’s profession of love. Kayla tells Allie that saying I love you shouldn’t be a conditioned response. Allie worries if she asks for more time, she’d be asking Tripp for too much. He’s been so patient with her. He’s great with Henry. “Not to be crude,” she says, but he’s good-looking.

In the square, Tripp offers to help Chanel with a heavy box she’s carrying. He takes it into the bakery for her. She’s grateful since it’s a bread maker and is expensive. They get a drink and she shares that the reason Allie isn’t helping is that Henry had a doctor’s appointment. “I guess they had to change his oil and rotate his tires.” Tripp heard she found someone. Chanel admits she did and that they should have come into the Bistro. She’d have introduced them. Chanel admits that they went back to his place and things started to heat up but he didn’t have a condom so she left. “Wow,” Tripp says, surprised she told him all the dirty details. Chanel assumes Tripp’s happy about her new guy because it means she’s keeping her distance from his girlfriend. They agree that they both hate for things to be awkward because of their friendship. They agree to do a double date. “I promise not to stick you with the check this time.”

At the mansion, Tony and Anna discuss going out together, but she just wants to be alone with him. He chuckles seductively and they start making out. Someone watches from the foyer and Tony feels there are eyes on them. Johnny pops out and asks if they’re ready for their close-up. Anna jumps up and hugs him. Tony does the same and they share that they were in the Cotswolds. Johnny butters her up, telling her she looks younger than ever. Tony doesn’t like that he was spying but Johnny wants to make them stars. He’s making a movie. “On your phone?” Anna asks. Steven Speilberg does it. “I loved ET,” Anna says. Johnny asks them to bankroll his new project. Anna’s in. They talk about going to the Oscars when he wins and Anna already plans to go to Milan for her dress. Tony’s supportive. EJ rains on their parade. He refuses to let Tony help his son out. He calls Johnny’s investment pitch amateurish but Anna loved it. EJ tells them that Johnny’s coming to work for him at DiMera Enterprises. Johnny says no. He’s not. Anna says he could run the DIMera film division. “There isn’t one,” EJ says. Then she suggests they start one. “DiMera Flix.” EJ thinks Tony’s acting against the company’s best interests by helping Johnny. Tony tells his brother he forgets who he’s talking to. You presume too much.” He apologizes to Johnny that now isn’t the right time. Johnny calls him Fredo (the middle brother from The Godfather who betrayed everyone). Johnny apologizes. Anna thinks EJ’s acting like an imperious jerk. Tony tells his nephew that he wants him to do something safe. “Like race car driving.” He recalls how EJ used to act when given direct orders. He chuckles and Anna tells Johnny not to forget to send her the rushes. They go and the men argue. EJ wants his son to at least try working for ED. He’d like them to work together. To spend time together. Chanel wanders in, telling Harold to stop by Sweet Bits. She introduces herself to EJ and compliments him on his home. Her mama’s in real estate. “The only thing you’re missing is a moat and drawbridge.” Chanel invites him for a double date but EJ tells her he has plans. Johnny ignores his dad and they go. Later, Tony returns and rubs EJ’s nose in the fact that he couldn’t change Johnny’s mind about DiMera.

Related: Fans turned off by characters on Days

At the pub, Steve tells Justin that he has no problem with Bonnie anymore. Kayla helped him see that Bonnie was trying to be accepted by dressing like his sister. He’s happy Kayla is her matron-of-honor. Justin asks Steve to be his best man. Steve would be honored. Justin admits Bonnie had the idea. She figured they’d get the family approval if he did. Justin says Bonnie likes him, and how he sticks up for Adrienne’s memory and does the right thing. Justin goes and Kayla turns up. They kiss. She’s shocked and proud that Steve will be Justin’s best man.

Related: Trailer & photo for Beyond Salem

Bonnie is shocked to see someone walk into the Kiriakis living room. “Oh my God. You’re alive.” She passe out and a curvy woman waltzes in and moves Bonnie’s arm with the tip of her stiletto shoe to wake her up. When she doesn’t, later, Bonnie’s on the sofa and the woman slaps her face. “Bout time, I thought I was gonna have to get out the smellin’ salts.” Bonnie says she took her by surprise. She thought she was long dead. “Well, you thought wrong. Calista Lockhart is alive and well,” the blonde says, spreading her hands out for effect. Calista read “every lying word” of Bonnie’s book. She didn’t bother to mention that she killed Calista’s brother. She recalls the day she married David. Bonnie argues that she’s the one who made the mistake. Calista gripes that Bonnie killed her husband. “Harrison Lord.” She accuses Bonnie of shooting him to death. Bonnie shushes her and threatens to call someone to kick her out. Calista pulls a gun in a handkerchief. It’s the one she used to “send Harrison to the hereafter.” She wanted to show her that her prints were still on it. Calista wants money or she’ll send her back to the slammer. When Buddy’s Burger Barn had the promotion, “buddy bucks,” Harrison asked her to steal one of the promotional tickets and claims Bonnie killed him and ran off with the cash. Bonnie shakes her head. Calista wants her money — now! Bonnie doesn’t have money. This is her fiance’s. “No. I couldn’t. I wouldn’t. I wouldn’t even know how to explain it to him.” Justin strolls in…

Tripp arrives at the hospital and invites Allie out with Chanel and her new beau. Kayla offers to sit with Henry.

At the new hotspot in Salem, Tripp tells Allie that Giovanni’s the name of Channel’s new beau. Allie’s shocked. That’s what her grandfather used to call her brother. She is shocked when she looks up and sees Johnny on Chanel’s arm.