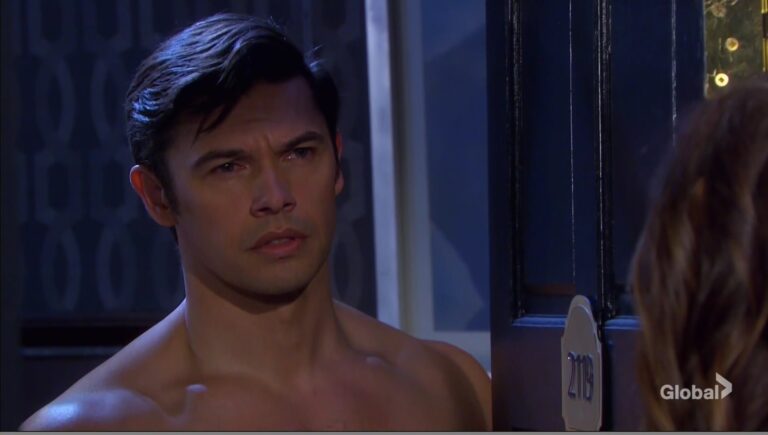 Characters sacrificed for plot points becoming the norm on Days of our Lives.

When I first began watching Days of our Lives,  Bo was with Billie, and I wasn’t a big fan of them as a couple or Billie at the time. When Princess Gina came on the scene, and it was proven that she was Bo’s ex-wife, I shipped them. These two went through ups and downs with Bo returning to Billie after Hope called off the wedding after finding Bo in bed with Billie naked (they were snuggling because he had hypothermia), and later being kept from Hope once again when he and Billie had to pose as a couple for some undercover effort. Bope fans sat through that, through Bo and Carly, and I couldn’t stand her, either.

It’s harsh to see the couple you want together with a storyline you’d like to see for them take shape when an interloper, especially one with a history like Gwen is involved. Days had Kristen ship Sarah off to some remote island after drugging her, and nobody has heard from her since. Nobody in her family has mentioned her. Not even Kate seems to have spoken with Rex to learn that he didn’t leave Salem with Sarah. It’s been five months. At least it appears as though Kyle Lowder is back taping on set so this story could actually be coming to a climax closer to winter.

I enjoy Emily O’Brien and Paul Telfer’s acting. I like Xander and pairing the town’s pariah with him has softened me toward her. I haven’t forgotten what she’s done and I don’t want her redeemed, though, with the right writing, I believe she could be. If Gwen’s backstory hadn’t been a retcon or if it had been written differently, some may have found the troubled character more appealing.

been saying this 4 month’s Gwen needs a way better storyline. She’s under developed as a character, given no purpose other than needing 2 be saved. 4 the exception of Lani/Price Fam every woman on this show right now has the same basic storyline. I need a man save me #Days🥱😪😴

I have no issue at all with the show bringing Xander’s bad boy image back out. It makes perfect sense that his devastation over thinking his fiance left him for her ex turned him toward his darker side. I fully support it. He’s fun when he’s bad or at least grey, but his recent past that he worked so hard for shouldn’t be erased. I enjoy Gwen and Xander’s chemistry. If he wasn’t having sex at all while Sarah was gone, it wouldn’t be believable to me, and when she returns, there would be no drama. I’m guessing that’s what the point is, to have him embroiled in a romance when she returns. DOOL does love their love triangles.

In the August 24 episode of Days, Xander and Gwen discussed his reason behind throwing himself under a bus for her. Something that viewers, including myself, found far-fetched. Xander told Gwen, “Well I don’t think I’ve ever done anything so selfless for someone before so maybe we’re both exploring new territory.”

This line pissed off Xarah fans and Xandy fans who felt he was selfless with Sarah many times and wasn’t “exploring new territory.” In context, I guess he’s right. Risking going to prison for someone is the most selfless thing I’ve seen him do though, I missed out on a few months while on hiatus. But this dialogue could have been tweaked to have Xander let Gwen know that he’s not exactly who she sees him as. It’d still have provided vulnerability and wouldn’t have annoyed viewers. It wouldn’t have felt as much like a slap in the face to his character and to Sarah and their whole fanbase. He could have simply said that she doesn’t know him that well, that he can be selfless.

Why are they acting like Xander never did anything selfless for anyone? WTF am I watching? Lies lies lies and rewriting history again. He friggen changed for Sarah and risked everything for her and actually became a better person. I hate this show sometimes. #Days

#Days Has Xander ever made anyone smile?
Has he never done anything selfless before?
All these things he did over and over for Sarah.
We’d just have to forget the whole #Xarah story, I guess, to make gander believable 🙄
If you want to waste X on G, at least give me back Sarah💔

It has to be difficult to write a soap. I’m not discounting that. But this is hardly the first time the show has made these types of blunders. It’s becoming an everyday occurrence with them “forgetting” what happened with characters in the past. Most recently, they’ve turned many off EJ DiMera’s character with all of the misogynistic dialogue they’ve had him throwing out there about his own wife because she cheated. It’s an unnecessary way to get a point across that he’s hurting and lashing out. EJ has changed, yes, and he’s a DiMera, but he has never once spoken so lowbrow in the past. Why change who he is at his core? And why turn off their whole demographic who is mostly but not limited to middle-aged females 45-64 and a smaller demo of men who happen to be feminists. A few changes to the dialogue and more time spent writing for characters instead of changing them to write for the plot would go a long way toward bringing people back to watch.