Home » Bold and Beautiful » B&B Recaps » Steffy Asks if Taylor Wants to Get Back at Brooke, While Brooke’s Put on the Spot by Hope 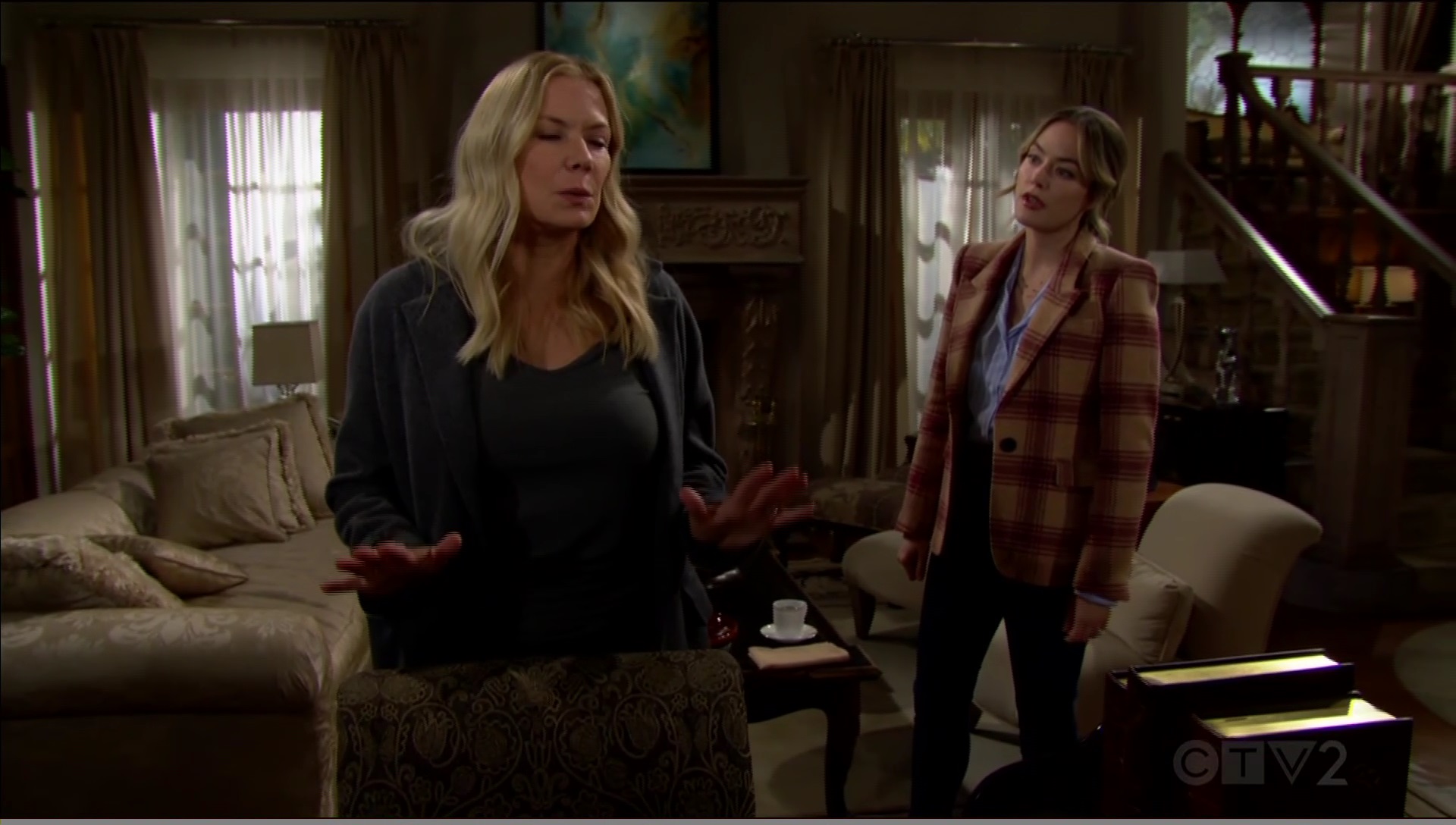 In the Wednesday, January 12, 2022, full episode recap of CBS’ Bold and the Beautiful, Steffy’s hopeful that her mother wants to get back at Brooke, and knows that something is brewing with the blonde, while Carter and Ridge praise Paris at work. We also have Tuesday’s B&B recap where Taylor tried to keep peace between Steffy and Ridge and Grace couldn’t hide contempt for Carter.

At the Cliffhouse, Steffy knows her mom is still in love with Ridge. Taylor reminds her daughter that he’s married to Brooke. Steffy thinks they need to get him away from her. Taylor hates to see Steffy upset but “it is what it is.” His life is with Brooke and the Logans.

Steffy pressures her mom not to give up. Taylor doesn’t want to keep this up. She has to move on, but laughs when Steffy tells her to manifest it.

She brings up what’s going on at Brooke’s place. When it comes out, that’s when they’ll “bring Dad back home, with us.” She notes that her parents have a twinkle in their eyes when they look at one another. Some of Steffy’s cherished memories are of her family.

Steffy snipes that Brooke has robbed her of so many years, “Just like Hope robbed me. Let’s be real. She took Liam away from me just like Brooke took Dad away from you.”

Taylor doesn’t blame Brooke for all of it. They did grow apart. Steffy talks about having issues with both men. Steffy ruminates over what’s going on at Brooke’s.

They are both shocked that Deacon was allowed to go to the house on New Year’s. Steffy asks if Taylor wants to get back at Brooke.

At her house, Brooke tells Hope that she doesn’t want to see Deacon because “it isn’t a good time.” Hope rails about how it’s so sudden and point blank asks if something happened between them.

Brooke flashes to kissing Deacon and seems to struggle with what to say. Hope asks if Ridge said something. Brooke tells her he isn’t the one that did anything wrong. Hope pushes her then to talk.

Hope tells her mom that getting drunk isn’t unforgivable. She again asks why her dad suddenly disappeared. Brooke says if she could go back she’d make better choices. Hope begs for details.

New comings and goings at B&B

At Forrester Creations, Carter talks to Ridge about the good foundation work. Carter goes on about how Paris is very special.

Paris overhears the men when she strolls into the room with some files. Ridge tells her how well she’s doing at work and they talk about having a formal dinner party for her mother. Carter asks if Brooke’s coming in and he brushes them off, leaving Carter looking confused.

Paris talks about showing her mom around and Carter is surprised at how his mom was with him. Paris plans on defending him to her mom if she needs to. He’s glad she has his  back.

Paris talks about wanting her mother to stay in L.A. permanently. Family is important to her. Carter will send “good vibes” out for her. She brings up Zende and wonders what to do about him. She goes over not wanting to get married yet. She wants to be independent right now.

Carter understands. He thinks it’s a good idea for them both that Zende decided against proposing. Paris isn’t sure what to do and doesn’t want to lead him on. Carter advises to follow her gut. She’s a good person. She’ll figure it out.

Ridge arrives home early to check on Brooke. She assures him he doesn’t need to do that. Hope agrees with Ridge that they want to be with her every step of the way in her journey.

He vows to go to her AA meetings with her and handle whatever reason was behind her slip up as a family. Hope brings up Deacon going missing and Ridge starts yelling about him always going missing because that’s what he does.

Brooke touches her head. She doesn’t want to talk about him or risk losing their beautiful family.

As Hope Demands the Truth About Deacon from Brooke, Steffy Asks Taylor to Fight for Ridge