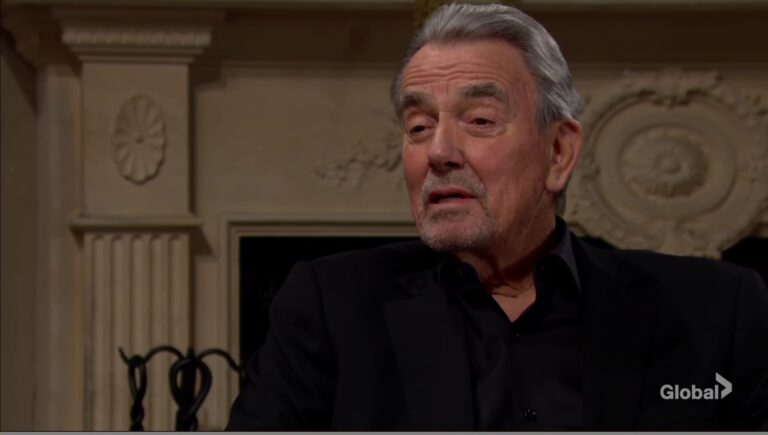 Canadian Y&R day ahead recap for Wednesday, January 12, 2021 episode, which airs in the USA Thursday, January 13. (Recaps live by 5:45 PM EST daily.) In the previous episode, Sally asked Adam to New York with her. In this episode of CBS’ The Young and the Restless, Adam spills his guts to Chelsea about Victor, Chloe gets between Sally and Chelsea, and Nikki gifts Victoria shoes after she wins the bid for ChancComm.

Outside of Society, Sally piles it on thick, telling Adam all of the fun things they can do while they’re in New York. He comments that he has to work. She reminds him there are cell phones and he can work during the day and hang out with her. It’ll be fun. Chelsea appears and he thanks her but tells her the timing isn’t right. She gives him back his coat and he goes, leaving Chelsea to ask what she offered Adam. Sally calls it unimportant.

She’s freezing and wants to go in. Chelsea pressures her to talk and Sally insists she wasn’t hitting on him. Chloe appears and tells Sally that she left her things at the table. She wasn’t sure she was returning. She goes inside and Chloe asks what’s going on. Chelsea thinks Adam shot Sally down after she made a move on him again. “Go easy on the poor girl. She must be humiliated.” Chloe heads back inside and accuses Sally of flirting with Adam.

Sally calls it a work conversation. Chloe thinks she’s lucky to be going to New York to interview young and upcoming designers. Nobody wants to see her go. She’s the face of the brand. Chloe hopes the tension will go away with space. Sally thinks she may be right. She knows Chelsea thinks she’s in the way of a reunion with Adam. “With me gone, she may have to face that it’s not a reality.”

At Crimson Lights, Ashland tells Lily that Billy deserves every consequences of his exceedingly poor judgment. Lily says Victor has hated Billy for years. He’ll use any excuse to go after him. It’s an ongoing vendetta. Ashland wonders how charitable she’d feel if someone repeatedly broke Matilda’s heart the way Billy has to Victoria.

Lily’s confused. She asks if he’s trying to justify this war against Billy into infinity. Ashland says there isn’t much to go to war about anymore. Billy’s down and out. Lily thinks as long as they don’t interfere, Billy will be fine.

Ashland assumes if Billy gets bored, he’ll create his own drama. He guesses that she worries he’ll bring more retribution on board at Chancellor. He says he won’t. His focus is elsewhere and he shares his good diagnosis with her, that his cancer stopped spreading. She’s really glad to hear.

He knows she’s a cancer survivor and would appreciate his new lease on life. As long as Billy moves on, he has nothing to fear from him. Lily relaxes and thanks him. She wishes him well. He does the same for her and Billy and goes.

At the ranch, Victoria continues to try to get Victor to sell Newman Media to her. They’d be the dominant player in the Communication industry. Victor smiles. She thinks it’d be a breeze. He tells her that over confidence doesn’t look good on her.

She thinks owning all these companies would have chance for cross promotion and synergy. Ashland’s in. They both like her ambition but Victor says he isn’t selling. He wants Adam to have more time to prove himself as CEO.

Richard Burgi let go due to COVID violation at Y&R

At home, Lily works at her table and makes a call about the Baxter acquisition contracts. The woman agrees to send a copy and Lily asks if Billy’s in with Jill. She asks the woman not to interrupt and thinks “it sounds like a good sign.” She disconnects.

Victoria arrives at Newman and sees Nikki waiting for her in her office. She congratulates Victoria on her win. Now, Billy doesn’t have a media outlet to weaponize against their family. Plus, Victor was impressed with her boldness. Victoria admits he congratulated her. She gives her daughter a gift. Black patent stiletto heels.

Victoria loves them and hugs her mama. She reveals she made another offer to Victor and it didn’t go over well. Victoria puts the shoes on as Ashland walks in. Nikki thinks she wants to own the world. Victoria says that’s not true. She’s bringing the two companies under the same umbrella where they belong.

Victoria shares with them both that her dad turned down her offer in buying Newman Media. She thinks her mom should buy a new pair of shoes anyway, just in case he changes his mind. They tell him that Nikki just bought her these shoes for her win. Ashland admits, “Just for future reference, I wear a size eleven.”

Later, Nikki’s gone and Ashland gives his wife coffee. She notices his energy and is glad he feels well enough to spend all this time at the office with her. It’s his favorite place to be. “Aww, that’s so sweet,” she gushes. They discuss Victor rejecting her bid for Newman Media but since he left the door open for her to try again, Victoria’s feeling good.

Ash wonders if she relishes making Adam pay for his past crimes. She says no, she doesn’t think he earned that position in the first place. She knows that she fights people thinking she’s there because of nepotism. She fights that daily.

Victor visits Adam at work to talk about Billy’s scheme. Adam closes the door but doesn’t think there’s much more to say. Victor tells him that Victoria put a stop to Billy’s plans to be vindicated once he tried to get Adam to reveal what he did to him. Victor tells his son that Victoria was very upset about this whole thing.

She saw the whole picture and he didn’t. “And you should have.” Adam thinks it was easier for her to since she’s the mother of his kids. Why didn’t she warn them? He says he would have figured it out.

There was no problem. Victor asks if Miss Spectra was in on it. He says no, she was just as shocked when Billy blurted out the truth. Adam knows he and Newman Media weren’t in peril. He’s ready to wash his hands of Billy. Victor decides to take a more active role around there, a move that Adam doesn’t like.

Victor doesn’t care. It’s not up for debate. He goes and Adam flashes back to his father having faith in him. Chelsea appears and Adam’s rude. She wants to have that meeting tonight but he turns her down. She calls him a total jerk and he admits he’s annoyed with someone else and shouldn’t take it out on her.

She accepts his apology and he tells her that he was reminded that when you’re a Newman, there’s no such thing as “independent.” She can see Victor’s back to being himself. Adam doesn’t know why he lets his dad get to him. She thinks it’s because he loves him. She knows Victor loves him, too.

Adam thanks her. It’s nice having someone around who knows his history. She bends over backwards to lend an ear again and then invites him for drinks. “Why not!” He says with a laugh.

At the ranch, Nikki opens up about Victoria having her sights on Newman Media. He asks if she consulted her with that. “Why would she? I’m only her COO.” She is leaving all of that up to him and her daughter but asks if Adam knows about the bid. Victor’s worried about the future but doesn’t want her to worry.