Home » Bold and Beautiful » B&B Recaps » Eric Admits to Manipulating Quinn and Carter, While Ridge Calls Quinn’s Story Crazy, ‘Even For You’

Eric Admits to Manipulating Quinn and Carter, While Ridge Calls Quinn’s Story Crazy, ‘Even For You’ 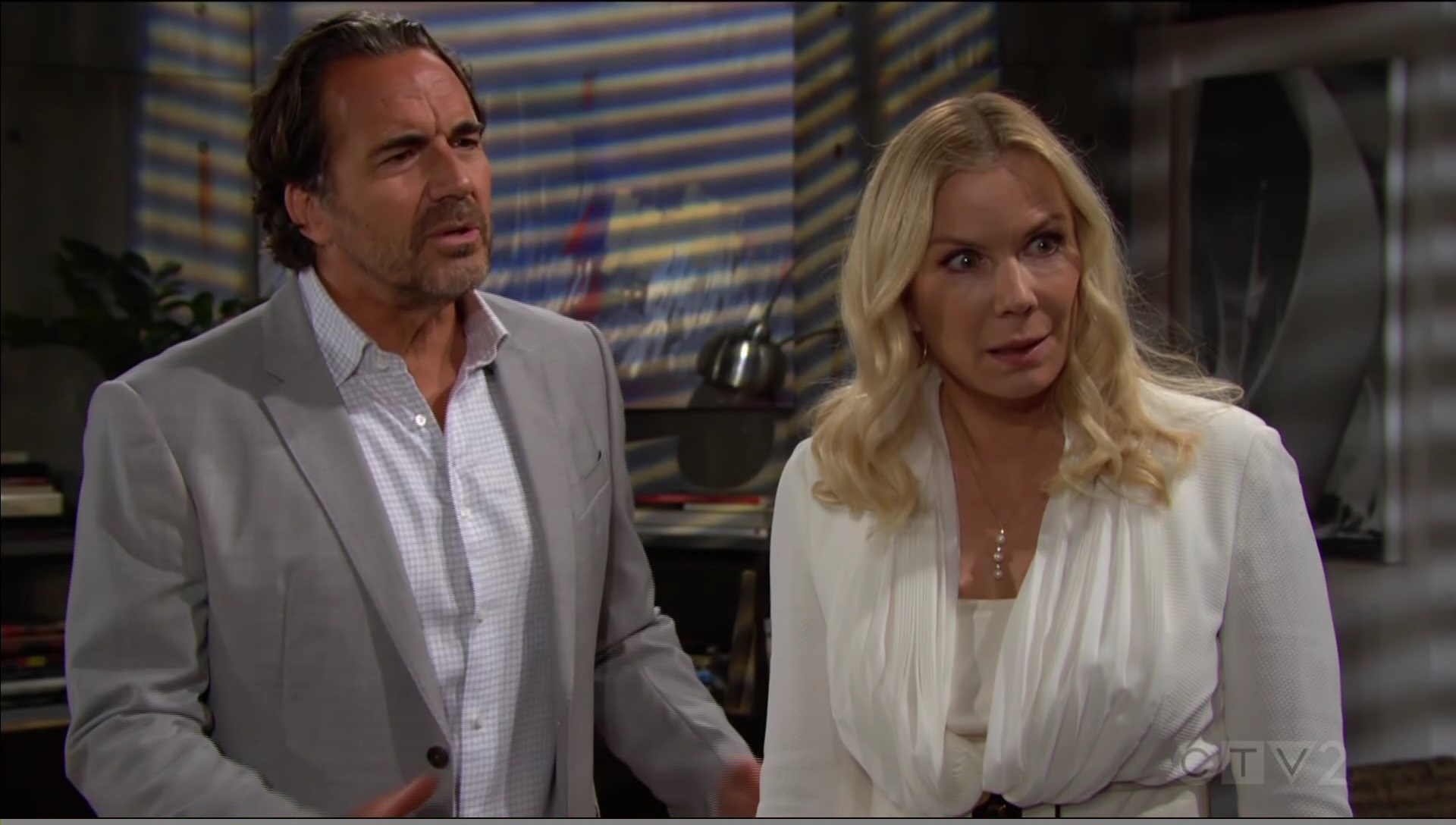 In the Thursday, September 30, 2021, full episode recap of Bold and the Beautiful, Brooke lashes out at Quinn when she doesn’t understand her situation, and Katie puts the pressure on until Eric cracks and reveals he has ED. If you missed out, Soaps Spoilers has Wednesday’s B&B recap when Justin confessed everything to Ridge.

Related: Y&R day ahead recap up at 5:45 PM EST, the aftermath of Ash’s secret

Quinn yells at Brooke that they’re not sneaking around. Eric knows all about it!” She yells. Brooke doesn’t look as though she’s buying it. She snipes that it’s ridiculous. Ridge asks Carter for his thoughts since he used to be an upstanding man. Carter sighs. “Before Quinn got her hooks into you.” Quinn can’t take the disrespect any longer and snaps that Eric wants her to be with Carter. “It’s crazy. No man wants his wife to be with anyone else.” Quinn and Carter tell them they don’t know what they’re talking about and there’s a backstory. Quinn shares that she and Eric were having difficulties. Ridge shrugs it off to a regular marriage. Quinn finally admits that Eric couldn’t make love to her physically. He’s sensitive about it. Quinn yells that he’d never tell him about it because he’s sensitive about this. Brooke yells at Quinn that instead of being there for her husband she turned to her lover. Quinn explains that she didn’t turn to him. “Eric set us up.” Ridge says that’s “crazy talk, even coming from you.” Brooke thinks Carter’s lying for Quinn, and Quinn tells her it’d be a pretty stupid secret when all they have to do is as Eric for the truth. Brooke pulls at her hair. “Oh for God’s sake, stop lying!” Quinn can’t take the pressure and yelling anymore and runs off.

In his house, Eric says he wants to tell Katie the truth about him, Quinn and Carter. Katie’s befuddled. “What’s going on?” He says there’s a reason that Quinn turned to Carter and part of the blame is his. “It’s not like you gave her a permission slip,” Katie counters. She says there’s no excuse to break Eric’s heart. Eric tells Katie there was a distance between them. Katie pressures him to spill it. He admits he wasn’t able to be the husband she wanted. Katie asks how she couldn’t be fulfilled. “I wasn’t able to uh… I wasn’t able to perform in the bedroom. I have erectile dysfunction.” He was in denial at first. Katie’s sorry he’s dealing with this but maintains there’s no excuse for cheating with Carter. “Not the first time,” he admits. Katie asks if it’s happening again. She rants and waves her hands around in exasperation. Eric admits the affair the second time around was his idea. He shares that his wife and Carter were reluctant at first. Katie starts to understand. She calms down. She apologizes. Her heart is broken for him. “This isn’t love,” she claims. She can’t understand what Carter is thinking. Eric says not to blame him. He has feelings for Quinn and Eric manipulated this whole thing.

Brooke returns to her office and sees Katie. She slams her purse down and yells about uncovering something that will hurt Eric. Katie admits she knows everything and Quinn’s telling the truth.

Quinn rushes home to Eric to tell him something happened that he needs to know about right away. She first apologizes, knowing this will be upsetting and then reveals Ridge had her followed and now knows everything. “What? Oh my God,” Eric rants, in shock. Ridge waltzes in and confident in himself, tells Eric that his wife is cheating on him again. Eric tries to get a word in edgewise but Ridge keeps talking.