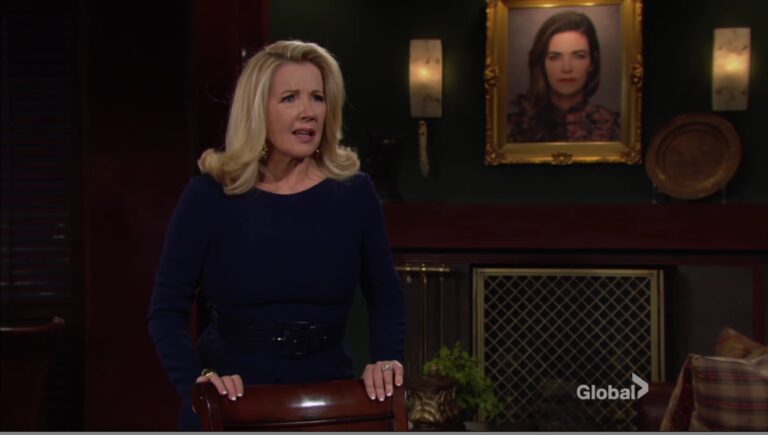 Soaps Spoilers has the Canadian Y&R day ahead recap for the Thursday, September 30, 2021 episode, which airs in the USA Friday, October 1, that is uploaded live by 5:45 PM EST daily. In the previous episode, Ashland revealed his huge secret. In this episode, Nikki learns the truth about Ashland, Tessa cries over how she and Mariah disagree on whether to have kids, and Summer and Kyle’s wedding is briefly postponed.

From Society, Ashland drinks and thinks of calling Victoria. He gets up to go and Nate appears and asks how his buddy’s doing. Ashland lies that everything has never been better. Nate’s alone to get dessert to surprise Elena for when she gets home from work. Nate asks if he’s sure he’s alright. Ash says he has some issues that are unresolved. Nate offers to lend an ear as a friend. Ash could use one. He lets his new friend know that details about his past have come to light. He made some choices that some may not understand. Victoria knows it all now. Nate asks if this means the wedding isn’t happening. Ash wishes he knew. His mind is telling him to wait and his heart is telling him something else. “Maybe you need to follow your heart,” Nate suggests.

Nikki interrupts Victoria moping at Newman. She asks what’s wrong. Victoria lies and Nikki reads into it. She asks if Ashland had answers to the questions she had. Victoria admits she learned about his past and it has her thinking. Nikki begs her to talk about it and promises she won’t judge or criticize. “I finally know who Ashland is. Who he really is,” she tells her mama. Victoria explains what Ashland did by taking the identity of a friend who died in a car accident with him. Nikki explodes. “What? Why would he do that?” He wanted to hide from his past and said he regretted not telling her. Nikki asks why he didn’t tell her. Victoria says it was painful to him and he didn’t want to speak about it. He only revealed it because he was backed into a corner. Nikki blames Billy but Victoria admits, “It’s much worse. It was Nicholas.” Victoria admits what went down and that she disinvited her brother to her wedding. Nikki freaks out, assuming she’ll regret this. “If there is even a wedding.” Vicki says, “Did I say I called it off?” Victoria needs time to think. She doesn’t want to discuss it more. Later, Ashland appears and Nikki says he just missed Victoria. He asks if she’s off doing wedding preparations and acts as though everything is okay. Nikki snarks that he doesn’t need to hide his feelings. Her daughter revealed everything! Ash asks if it’s changed how she sees him. Nikki hates the situation and thinks he needs to give her daughter space to resolve this. He nods and decides to get a room at Grand Phoenix.

Jack arrives home and sees Nick with Phyllis. He dashes off to get the pilot to get a flight plan while Nick explains everything he learned about Ashland. “Bobby Defranco? His name is Bobby Defranco?” She would never have put that together in a million years. Nick says he didn’t want to involve Victoria until he knew what he was dealing with and Victoria showed up with Ash. The two of them demanded she be a part of the conversation. Now his sister feels he’s betrayed her confidence. Phyllis is shocked. “That’s what I get for doing the right thing,” Nick says, moping. He reveals she cut him out of attending her wedding. Phyllis thinks she’s just angry right now. She’s shocked. “I’m shocked. I don’t even like this guy and I’m shocked. He really took the identity of a dying man?” Nick wonders what other secrets this guy has. Phyllis urges him to make things right with his sister or he’ll regret it. Nick will wait until after Summer’s wedding. Jack appears. Their flight is delayed due to inclement weather. The kids will adapt considering their ceremony is small. Jack suggests they head home and return in the morning. Traci appears once they’re gone. She has good news. She can come along on the flight. She admits she saw him with Phyllis and the glow that he has had about him since. She sensed a wistfulness when he watched her leave with Nick. Jack reluctantly admits he’s been thinking of his romantic past with her. Traci says friendship is one thing but she hopes he’s not acting on his feelings. He lets her know he’s not. The feelings might be coming from the whole Sally debacle making him think about loving and losing. They discuss Nina’s terrible parenting as Jack exclaims that he heard her voice in his dream. Traci thinks love never leaves them but changes its form. It never dies. Jack agrees.

At Grand Phoenix in their room, Mariah is angry with Tessa for telling her mother their business. Tessa was confused and concerned and didn’t feel she could speak with her girlfriend. “I tried. You didn’t want to hear what I had to say,” she admits. Mariah insists she’s listening. Tessa wants to have a family with Mariah more than anything — one day, but she doesn’t think it’s the right time. Their careers are in the way, their living arrangements, and she isn’t sure she’s ready to be pregnant or be a mom. She’s worried this decision might be coming from a place of desperation. “Ouch,” says Mariah, glumly. Tessa thinks she’s trying to be distracted from all of the emotions going on inside her. “I think you should work through that first.” Mariah hears her but completely disagrees. She’s saving herself. “Bringing Bowie into this world changed me.” She claims it’s about the love. Tessa argues that she’s not ready for that. “How do you know?” Mariah counters. Tessa needs to be in the right mindset and needs her gal to find her balance again. “You think I’m unbalanced?” Mariah asks. Tessa cries that it isn’t fair to push her into something she isn’t ready for. Mariah asks, “That’s it? End of discussion?” Tessa says no. She’s sorry and wants to hear how Mariah’s feeling. They hold hands and agree to keep the lines of communication open. “Together, we can handle anything that comes our way,” they agree. They profess their love. Mariah kisses her hand and Tessa asks to take a step back from baby discussions and breathe. She asks to table the conversation until after Victoria’s wedding. “I don’t wanna push you away,” Mariah says. She needs her girlfriend. Tessa will be there for her no matter what happens. They hug. Later, Mariah’s in bed and Tessa can’t wait to fall asleep in her arms. As she gets ready for bed, Mariah seems to be asleep. Tessa goes to the washroom and Mariah opens her eyes.

At Grand Phoenix in their room, Phyllis and Nick call Summer to talk about the delay. They discuss Victoria and Phyllis asks Nick if he regrets digging into Ash’s past. She blames herself for encouraging him and regrets it. Nick says she didn’t force his hand. He would have done it anyway. “I have zero regrets.” Downstairs, Victoria finds Ashland ready to get on the elevator.

Next week on Y&R — Spoilers!

Chloe watches Sally as she says if she can’t bring Victoria the dress, she’ll bring the dress to Victoria. She holds the wedding gown in her hands.
Tessa tells Mariah that the baby’s in great hands and she doesn’t have to worry about him. Mariah retorts, “Tessa, I can’t just stop caring about the baby because we don’t live with him anymore.”
Does this have to do with an actual crime?” Ash says, “Yes.” Victoria asks him to tell her everything.