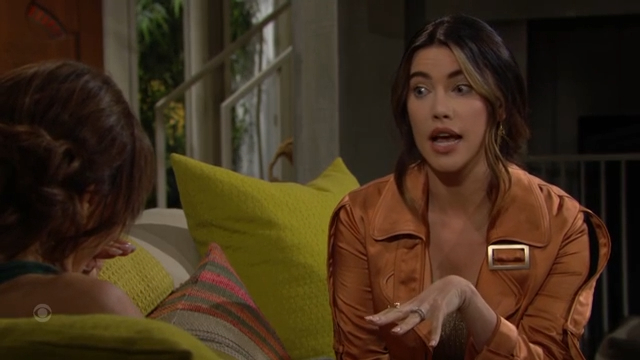 Still wondering who this show is being written for.

One step forward, one step back.

Last week, I talked about how the show seems to be written by someone who doesn’t know B&B’s history, and this week we saw some minor improvements on that issue.

There were a few nice moments, like when Taylor talked about her rocky history with Ridge. Great dialogue coupled with low-key acting that emphasized her words. Brava!

But then the retconning picked up again when Taylor said that Brooke cheated on Ridge with Eric and Thorne.

That never happened and does little to inform this story, so what’s the point of all this rewriting that makes the Forresters seem like liars?

If you got theories, I want to hear them!

Where is the love in my afternoon?

B&B is suffering from a distinct lack of romance – mostly because as soon as a couple like Eric and Donna or Quinn and Carter get together, they’re swept off-screen.

I worry that Steffy and Finn could be next to shuffle off to the “people that we hear about but don’t see” part of the show. Don’t believe me?

Steffy seems to have devoted herself solely to sabotaging her father’s marriage, while Finn always seems to be kissing her while on his way out the door and out of the scene. Is this foreshadowing?

I’ve always had an up-and-down opinion of her, but I absolutely loathe Steffy right now. Is that the desired effect of this abysmal writing?

It’s not that she’s pushy and doesn’t mind her own business. I love that about her!

My problem is the sanctimonious way she boosts the Forresters as though we haven’t been watching the show and don’t know everything everyone has done – Steffy included.

Delusional Steffy is not my Steffy.

Steffy has said she’s not focused on Brooke, but Brooke seems to be the only thing Steffy thinks about besides her parents making out. And she thinks about that a lot!

Steffy and Finn are young, hot and popular with fans. They should be front and center with their own story, not being bit players in someone else’s drama.

What if Liam and Steffy argue about Thomas and she says she wants full custody of Kelly?

Or maybe Finn isn’t totally on board with the “new and improved” Thomas and it causes some friction with Steffy.

Something, anything to move them away from the endless war over her daddy’s peen.

B&B loves to give us a story prop to focus on. Things like the Hope mannequin, Sheila’s nasty severed toe and now Thomas’s apple.

Look, I’ve got no problem with Brooke overreacting to Thomas using a knife to eat an apple because it’s true to the history of Brooke being someone who tends to freak out easily.

However, there’s no denying that Thomas was intimidating Brooke with his fire and brimstone pledge to bring her down, punctuated with little jabs of the knife.

So far, no one is really talking about that implied threat. They’re just talking about the darn apple, which makes Brooke seem like a drama queen instead of the concerned grandmother she should be.

The call to end it all!

After dropping that anvil of a plot point when Brooke threatened to call CPS on Thomas, was it any surprise that someone did? I imagine CPS might have an agent dedicated solely to the Forresters and Logans.

Wasn’t it weird when we heard the caller identify themself as Brooke Logan and not Forrester? It was also strange that “Brooke” never called Douglas her grandson, which she usually does.

On one hand, I want to say that it is incredibly obvious that the caller was Thomas pretending to be Brooke with that voice app. Heck, maybe those CPS agents were really actors doing a bit of theater for Ridge’s benefit.

I so want to believe that B&B is about to unleash a twist on us! Probably won’t happen, but a fan can hope.

Thomas’s constant complaining that people aren’t convinced he’s changed is exactly what I would expect from a rich kid who suffers few consequences for his actions.

Except that Thomas is not a kid. We’re supposed to believe that he’s a successful designer and a good father but he’s just coming off like the entitled jerk I talked about last week.

So why not embrace it and write jerk Thomas intentionally instead of trying to convince us that he’s a good guy who also happens to still carry a torch for the woman he victimized?

The more the dialogue tries to push that Thomas had a magical off-screen brain fix that turned him into Super Dad, the more I resist believing it because I’m insulted that B&B decided his redemption wasn’t worthy of screen time.

I don’t speak for all fans or maybe even most fans, but when a character has terrorized his own child, I’m going to need more than “strides” and smiles to think he’s changed.

Is this the last of Sheila?

Sheila’s once-a-week appearances are making me wonder if B&B has gotten bored with her. It happens on this show.

The iconic villainess that was once the center of everything has spent the past few weeks on the sidelines not doing anything but watching her stories.

Sheila Carter, the psychotic stay-at-home granny, is a total bore and a waste of talent. Why bring her back for this?

I was hoping that Deacon would try to figure out where Sheila’s money is and how he can get it for himself, while Sheila plots to kidnap her grandson Hayes and frame Deacon for it. DRAMA!

So far, no such luck.

When a once vital character is reduced to occasional scenes, the writing is on the wall: Sheila’s time in the spotlight might be over.

Brooke, about Taylor: “She’s had a few conversations with her son and she thinks that he’s fixed? Come on!”

Has someone has been reading my tweets?!

What do you think? Is Thomas back to his old ways? Will Steffy ever mind her own business? Are Sheila’s days numbered?