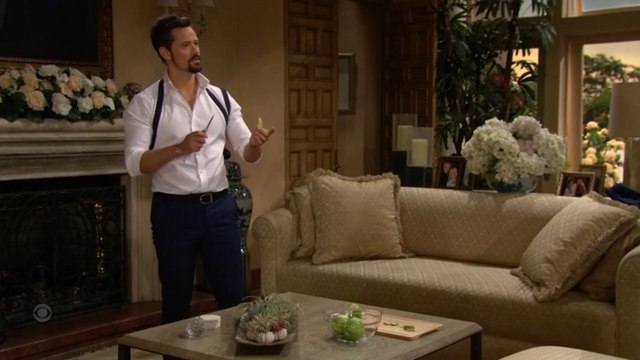 Wild ideas to explain why the show has forgotten so much of its rich history.

Who is this show being written for?

Is it just me or is B&B starting to feel like it’s being written by someone who used to watch the show and sort of knows the characters but can’t remember all the details?

Probably not true, but it would explain what’s happening on our screens.

As I talked about last week, Bold and Beautiful is playing fast and loose with history to create a stark contrast between the Logans and the Forresters.

It makes me wonder who the target audience is when details are rewritten or forgotten to make one family look better than they really are.

B&B should start writing the Forresters in a way that acknowledges their blemished history but also makes them likable characters. Characters with flaws are sympathetic because we all have flaws.

Think of the Quartermaines of GH or the DiMeras of Days. Legendary messy families that know who they are and overflow with DRAMA!

That’s what I want for the Forresters – a clan with a soiled history that should never be washed away. Then I would care what happens to them.

But when someone like Thomas or Taylor has their history – stories that we have spent hours watching over the years – just wiped away to reboot the character, I no longer care what happens to them.

Thomas so worked up over Brooke

Thomas wants Brooke and you’ll never convince me otherwise. Hear me out!

Thomas is hot under the collar about Brooke’s parenting. He says Brooke has had no effect on him, but she’s also somehow to blame for his problems.

His follow-up line about Brooke using a “red teddy and some giggling” to get Ridge was reprehensible – and oddly specific.

I had to watch that scene again to make sure I heard it right!

For folks who say that Brooke is nothing but trouble, the Forresters sure do think about her sex life a lot.

In my warped mind, Thomas has never resolved the sexy feelings he’s had about Brooke since they were stranded on psychedelic berry island.

I think Thomas is jealous of his father for being with Brooke, so he’s trying to break up their relationship and reunite Ridge and Taylor, paving the way for Thomas to finally have his chance with Brooke.

But how else to explain Thomas’s seething hatred of the woman who raised him while his “now you see me now you don’t” mom Taylor is motherhood and womanhood personified?

Every wealthy soap opera clan needs that entitled rich jerk character. A troubled anti-hero that doesn’t quite fit in with their kin.

We know they’ve got injured souls, so we care about them – even when they don’t do the right thing.

That’s the kind of man Thomas should be. Not a good guy but not entirely a bad guy either.

I don’t want Thomas to be a full-blown villain because that only leads to an exit from the show. B&B should guide story in a way that preserves Thomas’s edge and acknowledges his wrongdoings without him being a menacing pervert again.

Taylor is an alcoholic

Brooke has had a lot of sex and she’s constantly being told this has “ruined lives.”

Meanwhile, Taylor killed Darla while drunk driving and shot Bill in the back, but no one has suggested that Taylor ruined anyone’s life.

Why are these major moments being ignored for one character and not the other?

B&B continually writes sex as a major sin that can never really be forgiven (if you’re not a Forrester), while killing, rape, child abuse and drugging are things we the viewers should forget about once the shock value of the story has worn off.

The pot calling the kettle a tramp

All that his one-sided writing is doing is putting me firmly on Brooke’s side because she’s the kettle being called out by newly scrubbed clean pot Taylor.

The writing has taken Taylor too far from the woman we knew. She’s drinking, gaslighting Brooke and not mentioning any of the real reasons she and Ridge split.

I no longer recognize Taylor because she’s not the woman we once knew.

At the end of Friday’s episode, Taylor talked to Ridge about carrying guilt and shame about the past. Then she was silent and blank for a second.

It was a brief but effective moment.

I imagined Taylor was thinking of poor dead Darla because that would be a good way to start being honest about Taylor is. After that, how about an AA meeting to get her back on track?

Get Taylor off the couch and into some DRAMA!

Is it possible that this strange version of B&B we’re seeing now is actually one heroine’s very long dream?

Could it be that Steffy is still in a coma after being shot by Sheila, dreaming the last few months of story that has seen the Forresters rising?

Finn survived being shot dead. Steffy’s divorced parents are close to reuniting. Thomas is all better and has his son. Sheila is dead. Brooke is losing everything.

This is Steffy’s dream and she’s doing the writing!

But now weird things are happening. Sheila is alive and wearing a weird mask. Thomas is starting to act crazy again. Amelia is invisible. What is going on?!

Steffy wakes from her coma, only to find… DRAMA!

Okay, my idea isn’t perfect. I’m just looking for a way to forget the last few months of story!

Bill, about Ridge: “Forrester’s an uptight, entitled waste of skin. What does she see in him?”

What do you think? Is Thomas obsessed with Brooke? Is this clean version of Taylor working for you?