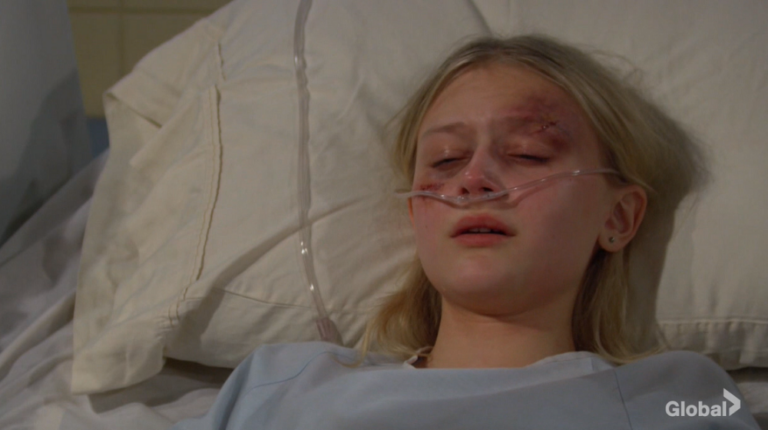 This is the Canadian “day ahead” Y&R episode from the Wednesday, March 31, 2021 episode, which airs in the USA Thursday, April 1. On today’s day ahead, full episode recap of Young and the Restless, Phyllis lashes out at Sally, Jack’s shocked at Billy’s suggestion, and Faith has an apology for her parents.

The lady in the Green Dress walks by as Sally arrives at Phoenix. Phyllis tries to hide her face and Sally is surprised she didn’t have a snarky comment. Summer appears and Phyllis snipes that there are 8 billion people in the world. Her mind isn’t always on Sally. Sally says, “That’s more like it.” Phyllis gets angry and goes at her. Summer gets between them and Sally smirks. She rubs it in that she’s off for her date with Jack. Once she’s gone, Phyllis apologizes to Summer. She’s exhausted and worried about Faith. “This is exactly like it was with Cassie.”

At the hospital, Nick and Sharon tell Faith they’re happy to see her open her eyes. She nods and apologizes for doing “such a stupid thing.” They must be mad at her. They tell her they’re relieved. Later, Nate has examined the kid and says she’ll make a full recovery. She can go home in a few days. Nick and Sharon are thrilled. Nick goes to call Nikki and Sharon visits Faith, who can’t wait to go home.

At Newman, Nikki’s beside herself with worry over Faith and her feeling that she’s responsible. Victoria and Victor chat about Faith, but Victoria’s mind is elsewhere.

At Society, Billy tells Jack he wants to outbid Adam and Victor for Ashland’s company. Jack says, “Oh, I see so you want to build a time machine for when that option was on the table.” Billy retorts that since Adam is wanted for attempted murder, Ashland might change his mind about letting them buy it. Jack can see he wants to exploit the Newmans during a crisis. Billy says yes, and he needs more cash. Jack points out that Adam hasn’t been charged. He’s not backing him and urges his brother to drop this. He calls it revenge. He doesn’t want to buy the company for a good reason. Billy denies that.

Back at the club, Phyllis and Faith are thrilled to hear Faith is awake in a text from Nick. Phyllis gets verklempt as she tells her daughter that there is nothing a parent wouldn’t do for their daughter. She brings up Sally and the two discuss the bridges she burned in L.A. Phyllis has plans for her. When Lauren appears, Summer goes. Phyllis asks Lauren to give Sally a job running her store in L.A. Lauren says that’s a lot to ask. Is she trying to run her out of Genoa City? In a word, Phyllis says yes. They argue about who Sally really is as the woman in the Green Dress tidies up behind Phyllis. Lauren thinks Phyllis is hiding something. She says she’d better be more forthcoming if she even wants to discuss this further. She storms off.

Back at the ranch, Nikki tells Victor and Victoria that faith is awake. Later, the father and daughter discuss Billy and the APB out on Adam. She thinks Adam had the motive to attempt to murder Rey but Victor denies that he’d do that. He was looking forward to his life with Connor and Chelsea, and he was happy about the deal they struck with Ashland Locke. “Why would he jeopardize that?” Victoria suggests her dad back out of the deal and let her buy the company. Victor refuses. Adam will be vindicated.

At Jabot, Kyle receives a text from Ashland who is in town tomorrow. He wants to do lunch. Kyle leaves a message for Jack.

Billy arrives at ChanceComm and Lily’s not happy with him. Locke’s office called to discuss an appointment tomorrow since he’s coming to town. He hid this from her. Billy tells her about his conversation with Jack. She doesn’t care. Ashland’s too busy to meet anyway.

Back at the hospital, Faith tells her parents she made a mistake and blames only herself for drinking and driving. She asks how she got there. Sharon says a Good Samaritan dropped her off. Faith asks for forgiveness and Sharon and Nick say they’ve already forgiven her. This doesn’t change how much they love her. They go and Moses Winters (Jacob Aaron Gaines) shows up. He introduces himself. He saw her parents leave and tells her who he is in relation to Neil. Nate walks in, surprised to see his cousin. “You were supposed to head to Devon’s place,” he says. He shouldn’t be talking to patients. Moses is sorry. He hopes Faith feels better soon. He takes off. Sharon and Nick return and Sharon reads a text from Adam asking her to meet with him once Faith is out of the woods. She’s the only one he trusts. Later, Phyllis finds Nicholas praying over Faith and eavesdrops.

Nikki returns to the ranch to discuss Faith with Victor. She’ll support Faith in therapy. She brings up Adam. He knows how she feels about him and doesn’t want to discuss him. She offers to listen when he’s ready. She goes to do some work. Later, Victor leaves another message for Adam, telling him to come home so they can solve this together.

At Jabot, Sally’s nervous about her first big pitch. Jack is there for her. Sally can’t resist bringing Phyllis’ name up and says they had an exchange today but she thinks Phyllis has accepted them. Jack doubts that. He goes to find his son and tells him not to meet with Ashland. She goes and Lauren appears to tell Jack about Phyllis’ request to transfer Sally to L.A. Neither can figure out what’s going on with Phyllis. Lauren goes and Sally appears. Jack says they’ve been spending a lot of time together but they still don’t know each other that well. Sally jumps the gun and assumes that he’s heard something about her. Jack questions her and she looks deflated.

Victoria goes to ChanceComm and tells Billy and Lily that Ashland probably doesn’t want to sell his company to a fugitive. She proposes a joint venture between their company and Newman. A united offer may be more enticing. She goes and lets Billy and Lily discuss it. Lily’s not on board but Billy wants to plod ahead.

At Society, Kyle tells Summer his dad wants him to leave town for a few days while Ashland is here. Summer thinks it’d be a good idea. They can celebrate their engagement. Besides, it’ll mean he doesn’t put himself or their future at risk. Kyle knows but thinks it’s best to face him head-on.

Sharon arrives home. She’s glad to see Rey. She’s so happy Faith woke up. Rey asks if Adam has reached out to her and Sharon lies.