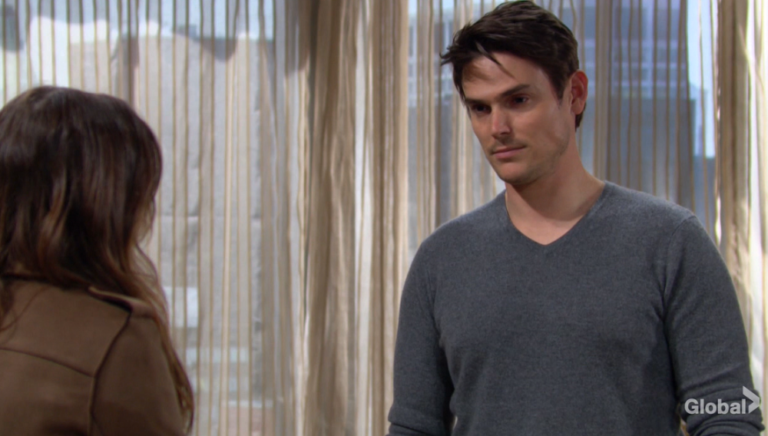 Soaps Spoilers is back with all-new Young and Restless spoilers for the week of April 5 – 9.

Faith was bullied in the worst possible way, by being publically humiliated by Jordan. In her devastation, she turned to alcohol for relief and drank and then stole a truck and drove. She got into a car accident and Adam just happened along and took her to the hospital. Of course, Adam didn’t stick around because he had been on the run from realizing that someone was setting him up for a fall. He took off when Rey was searching his condo for thallium and hid out. Meanwhile, the search was on for Faith and once Nate called Nick and Sharon to let them know she’d been found, they sat with her at the hospital, worried about the extent of her injuries. Since there was nothing pressing, she finally woke up with her parents at her side.

Coming up on Y&R from Monday, April 5 to Friday, April 9.

Y&R Day ahead recap – Sharon meets Adam on the sly

Ashland backs Kyle into a corner, wanting to make Kyle pay for his affair with Tara.
Ashland doesn’t stop at Kyle. He wants the Abbott family to pay!
Jack Landrón debuts as Sutton Ames.

Chelsea celebrates her freedom.
Chloe is worried she will lose everything.
Sharon is asked to help Adam.
Adam denies sending those texts to Sharon.
Jack conspires with Kyle.
Lauren’s disappointed with Sally.
Patrika Darbo appears as Sally Spectra (Sr.).

Victor retaliates against Billy.
Billy goes to Victor with the truth.
Billy finds Ashland and puts himself out there.
Lily gives Victoria a reality check.
Sharon is angry with Nick and Rey for talking about her behind her back.
Rey thinks Sharon should close shop until their lives are on an even keel.

Abby and Devon await news from Mariah on whether the egg implanted.
Lauren has bad news for Jack.
Mariah is pregnant.
Kyle gets a call from Ashland that has him worried.
Jack questions Sally.
Phyllis gives Nick a warning.
Sharon goes to Chelsea to plant a seed.

Nick’s visit with Chelsea takes a shocking turn.
Lauren takes control of the Sally and Summer situation.
Phyllis flies off the handle at Lauren.
Rey accuses Sharon of lying and she finally comes clean!
Chelsea speaks – she tells Nick that Sharon knows…
Sally spills to Jack.

Nate looks out for his best interests.
Lily loses her patience with Victoria.
Lily reins Billy in again as he continues to use Chance Comm as a weapon against Adam.
Chance is still MIA.
Nikki corners Adam.
Amanda is shocked to find Sutton Ames on her doorstep. Her grandfather.
Devon and Mariah explore how her pregnancy will affect their relationships.
Elena’s torn between two men and will finally choose.
Amanda gets more than she bargained for with her past.
Lauren tries to end the Sally/Phyllis feud.