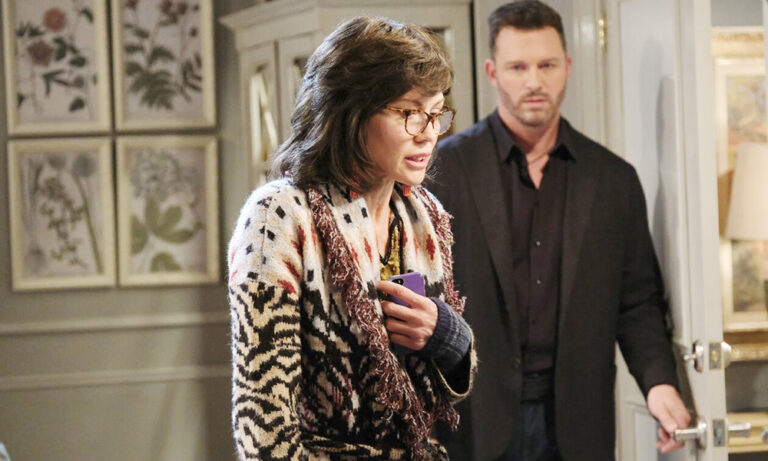 Wednesday, March 31, 2020: On today’s full episode recap of Days of our Lives, Marlena suggests a way to Ciara to remember, Theo and Ben argue, and Paulina has words with Chanel.

Brady arrives home and “Susan” tells him she visited Roger on tour and is back. She tells him Chloe and John are making dinner in the kitchen. While “Susan” gets drinks for them, Brady asks what secret she was talking about when he walked in. “Susan” tries to get out of telling him and Brady can tell she’s keeping something from him. “Susan” admits Chloe Lane has feelings for him. Brady stammers that Philip and Kristen said the same thing. Brady needs to talk to her but “Susan” says it’s the last thing he should do. She thinks he should get away. “Give her space.” Chloe appears, glad to see Brady. “Susan” tries to force Chloe to wash dishes with John but Brady tells her to do it so he can talk to Chloe. Brady admits his visit with Kristen was strange and she wasn’t herself. She and Vivian are looking out for each other now. This surprises Chloe. Kristen admits she’s struggling and it gets harder seeing him. Chloe understands. Brady admits Kristen doesn’t want to see him for a while. “Susan” returns as Chloe’s leaving.

At home, Belle bemoans Sami’s confession as she reads the news in the paper.

Claire arrives home with a champagne headache. Belle gives her a half-grin. “You were drinking champagne in the middle of the day?” Claire blames Chanel, the girl she met at the square. Claire fills her in on Chanel trying to stick her and Tripp with the $600 bill and how her mother paid it off. Belle asks if getting drunk mid-day is going to become a thing for her. Claire says it’s not. It felt good to blow off steam after being told by Ciara that she hates her.

Chanel drinks champagne at Paulina’s room at Salem Inn. When Paulina arrives, she’s incensed to see her daughter has ordered the most expensive dishes on the menu. “This is my room, this is my dinner,” she says. Chanel’s hungry and wants to dig in. Paulina reminds her of all the things she’s done like going on safari in South Africa. The party is over. It’s time for her kid to learn responsibility. They argue and Chanel says her mother worked too much while she was growing up. She spent more time with a nanny. Paulina argues that she liked all her nannies. Besides, her father was gone and she had to put food on the table. She wanted to spoil you to show her how much she loved her, but she knows things have to change. “You want to be queen, you’ve got to get a J O B.”

At the hospital, Ben tells Theo that he has a way to get Ciara’s memory back. In her room, Ciara listens to Marlena’s suggestion of using hypnosis to remember. Ciara says Theo visited and he couldn’t explain why she married Ben Weston. Marlena says Theo wasn’t around the last few years and her love for Ben was real. Ciara doesn’t get it. Marlena says she was wary of him in the beginning and they got to know each other and fell in love. Marlena believes in Ben. She knows he was having a hard time “but he took medication and worked so hard on himself and he became the man that you fell in love with.” Marlena advocated for his release from Bayview. Ciara admits she’s terrified of him when they’re in the same room together. Marlena shocks Ciara by telling her that she and Claire were best friends, too. Doesn’t she want to remember it all? By the hub, Theo tells Ben that Ciara refuses to accept she could ever be with a serial killer. “I am not that guy anymore, man,” Ben says. He asks if Theo stuck up for him at all. “No, I didn’t,” Theo admits. Ben’s upset that he didn’t support his marriage. Theo asks why he would. He doesn’t even know Ben. Ben will try to show him he’s changed. Theo goes to get Ciara ice cream and Marlena finds Ben. Marlena wants time to think about hypnosis. She tells Ben not to visit her for now. Ben’s grateful to her for trying. Marlena won’t give up. Ben goes and Belle shows up. They dish on Sami’s confession and denial. Marlena explains that Sami and Allie thought each other murdered Charlie. Neither did it. Belle wants to visit Ciara and learns she still remembers nothing from the last few years. Belle visits Ciara who tells her she feels like everyone around her has changed. Belle says Claire’s so happy she’s okay. Ciara snipes that Claire loves her so much that she tried to “sleep with my boyfriend Tripp.” Belle tries to convince her Claire’s changed. Belle’s happy to have her niece back and kisses her before going. Ciara stares at her wedding photo and shakes her head. Later, Belle bumps into Marlena. Ciara’s considering hypnosis.

Theo and Chanel bump into each other at the square. They tell each other they look good. Did she come there looking for him? She’s no stalker. She didn’t know he was there. “So what are you doing in Springfield?” Theo corrects her. “Salem.” He’s surprised her mom has family in Salem. She wants him to ask her to dinner to catch up. He’s busy and takes off. Chanel goes back to her mom’s room and Paulina lets her eat the leftovers.

Ben goes to Claire’s to complain about Ciara not remembering him, and how he asked Marlena to hypnotize her. Claire’s shocked she is thinking about it and not on it already. Both Ben and Ciara don’t blame her for not wanting to see them.

Theo arrives at the hospital with ice cream. Ciara’s grateful. Theo shares that he ran into “someone I used to know.”