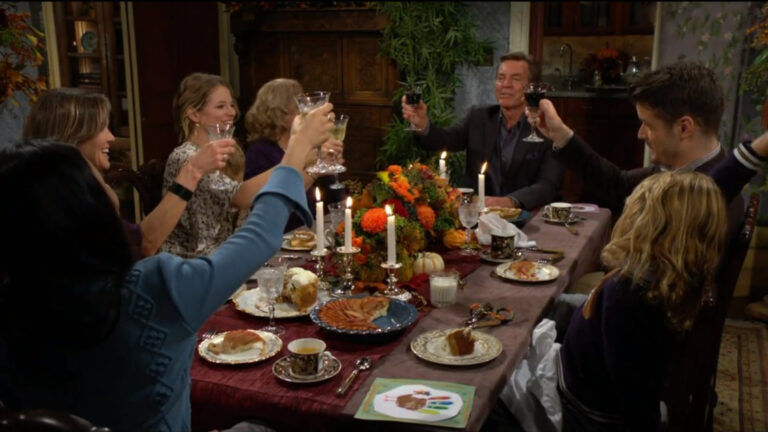 In this episode of CBS’ The Young and the Restless, Phyllis prods Daniel for details about his life, Victoria learns about what’s been going on with Chelsea, and things are tense at the Abbott Thanksgiving when Diane shows up. In the previous episode, Billy interrupted Lily and Daniel, and Adam turned up drunk at Sally’s to insult her.

At the Glam Club, Phyllis screams when she sees her son walk in. She fusses over him and had no idea he was coming back.

They sit down and he tells Daniel it has been way too long since he spent Thanksgiving with his mother. Last year sucked for her.

He’s a little surprised she wanted to meet there. She suggests they go to the place in Burlington he always used to go to and then they can meet up with Summer.

Sounds perfect to him.

They chat about her work until she demands they change the subject to him. She asks after Lucy and Heather. He explains they are in Portugal.

Reluctantly, Daniel admits things with Heather have been a bit rocky. His mom agrees not to push but she will always be there for him.

He explains he’s been thinking of starting a new chapter in his life and going in a new direction. They toast to that.

At the Abbott estate, Traci puts the finishing touches on the table. Allie declares how thrilled she is to be spending her first Thanksgiving with the family.

All the smiles drop when Diane strolls in. Kyle and Summer chat with Allie while Jack assures Diane that he asked his sister to cool it with the antagonism.

Harrison jogs in with some crafts he made. He hands them out and they chat about Phyllis and Abby.

Jack tries to stop Ashley from taking shots at Diane. Billy sends him a text asking them not to wait for him.

As they sit around the table, Jack prompts them to say how thankful they are.

Ashley says she’s thankful for how unified they are; Traci feels blessed by all their support; Allie is happy she found them after losing her dad; Kyle and Summer are thankful for Harrison; Harrison is thankful for mashed potatoes. Diane is grateful for her son and for being allowed to be part of the family.

Whispering to his sister, Jack tells her he wants no conflict today. Ashley tells him not to let Diane get too comfortable.

After Ashley leaves, Jack tells the guests that Jack and Dina would be smiling down at the latest generation to be in the house.

They toast to family, loyalty, kindness, and compassion. And to many more family gatherings to come.

Nick, Tessa, and Mariah are at Crimson Lights preparing things. Sharon explains that Faith is having Thanksgiving with her college roommate.

Victoria arrives with her son and they joke around. Chelsea and Connor come in and offer to donate their time. Things are awkward.

Billy and Lily arrive to add their helping hands. As Billy and his ex talk, Lily crosses over to Chelsea.

They sit in the spooky booth and Lily hopes she’s doing better. Chelsea says she’s getting the help she needed. She can’t thank Billy enough. He saved her life.

Out on the patio, Connor tells Johnny about his mom getting super depressed and having to go to the hospital. She’s trying really hard to act normal and keeps taking deep breaths.

Johnny worries that he was a jerk to her when he learned she was his biological mom.

Connor explains this is not about them. At least that’s what Chelsea keeps saying.

Johnny goes in and tells his parents that Connor filled him in. He worries that he hurt Chelsea by treating her like crap. He’d like to talk to her.

“If it’s that important to you,” Victoria says. He strolls off to do it. Victoria stares at Billy. She had no idea how bad things were for Chelsea.

He fills her in and says Chelsea is on a good path now. She wonders why no one told her about this.

They talk about how much help Sharon has given to Chelsea. He tells her that people have only been hearing about this gradually. She worries about how this will affect her son.

Billy is worried too but some of this is out of their control. Johnny seems to be handling it well. Maybe they should follow his lead.

Johnny heads to the booth and Lily takes off. The kid apologizes for how he reacted to the truth about how they are related. He’s sorry if it messed her up.

That means a lot to her but none of this is his fault. If anything, she owes him an apology for putting him in an awkward position.

She was just going through a rough patch but she’s better now and hopes that going forward they can be friends. They shake hands.

Lily tells Sharon how great it is that everyone is rallying around Chelsea. Sharon tells her she deserves some credit for hanging in there with Billy while he was putting so much energy into another woman.

Lily hopes things will be calmer from now on.

Nick announces that there is a line-up halfway down the street and it’s time to let people in.

Sharon asks Tessa and Mariah about their adoption plans. They explain the mother they met decided to give her child to her cousin.

It did at least give them some home and Christine prepared them for the possibility it wouldn’t work out.

Victoria asks her son how his talk with Chelsea went. He explains she assured him her depression had nothing to do with him.

Victoria is proud of him for being so compassionate and following his heart.

Billy asks Chelsea how her conversation with Johnny went. She tells him how sweet he was. She’s sure he only knows the bare bones of what happened.

Lily watches as Billy tells Chelsea she can stop by Devon’s later if she needs more pumpkin.

They are just relaxing before heading back to the ranch.

Her dad is looking forward to seeing her and Chance later. She informs them they are having some problems and she doesn’t want to get into the details now.

She spots Devon and crosses the room. Victor admits to Nikki that he had no clue about this.

“What the hell happened?” he wonders. His wife urges him to wait to find out.

Devon tells Abby that Tucker wanted to meet him there for a family meal. She’s glad to see him. His face makes her feel calm.

She admits that Chance has moved out and she’s pretty sure it’s over. He’s sorry.

Victor and Nikki stroll over on their way out. Abby tells them she will be skipping the family dinner tonight. She says they can see Dom with the nanny.

As they head out, Tucker opens the door for them. He assumes Nikki was pleased with the information he passed on about Diane.

Victor says they will all be better off when Diane and Tucker get out of town. McCall tells him he has a few things left to finish. “I’m watching you,” Victor warns.

Tucker joins Devon at a table, happy they get to share a holiday. He’d like to be a more regular part of his son’s life.

Devon turns around and spots Nate. When Elena sees them, she suggests they go somewhere else, but Nate insists on staying.

He strides over to Devon and asks if they can be civil. Tucker lectures him for doing something reprehensible to his family and orders him to leave Devon alone now.

When Elena and Nate get a table, she worries about Tucker interfering. He smiles and tells her how lucky he is to have her by his side.

Back at their table, Devon thanks his father for speaking up for him but assures him he can fight his own battles. Tucker spots Ashley and jogs over to him.

She tells him she was forced to share a meal with Diane today. She can’t take it anymore.

“It’s time to bring that bitch down!” she declares.

“I am just so touched you would stand up for me that way,” Diane says.

Daniel explains to Summer that he’s planning a new direction in his life and wants to work for Chancellor-Winters.

“What did you do to my daughter?” Victor asks Chance.