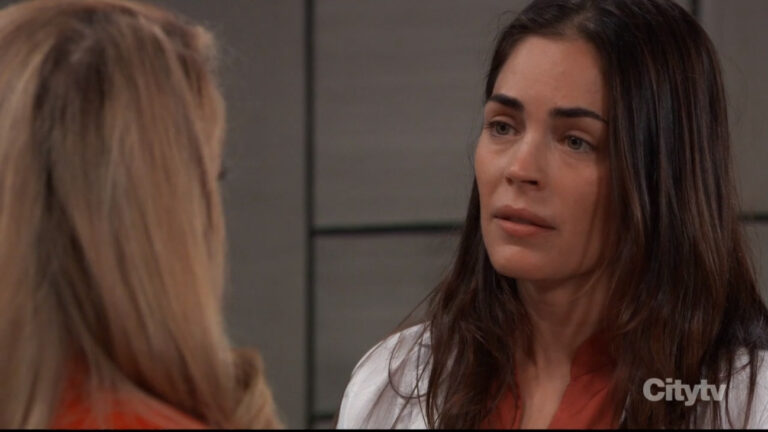 We also have Monday’s GH recap where Holly told Robert that she shot Lucy but she is alive, Victor has Ethan, and Joss kissed Dex.

Sam and Dante are eating with Alexis at the Metro Court and talking about the kids. Nina interrupts and asks Dante how worried Ava needs to be about Esme.

The cop doesn’t say much but the women ramble about the case and recap all the know. He suggests Nina and Ava stay vigilant and live their lives.

Once she leaves, he repeats the investigation is ongoing. Alexis and her daughter keep talking about Esme until they eventually discuss food for the holiday.

They talk about the Quartermaine plans for Thanksgiving and what Cody and Britt will be doing.

Dante talks about Chase possibly getting his job back. He says that Brook Lynn keeps not responding to his messages and then takes off.

Sam tells her mom that Cody and Dante seem to have done something unsavory when they were teens. She feels like she needs to find out what happened.

Nina joins Obrecht at a table and they discuss Cody and Britt. Liesl wonders if any of Sonny’s family is still speaking to him.

They complain about how annoying Michael and Willow are. Nina doesn’t like to see Sonny hurt by his son.

She assures Liesl that Sonny is treating her well.

When Nina walks by Alexis, she starts asking her about the hook killer. Nina offers to speak to Ava to see if she wants to talk to her about Esme.

Alexis decides to break her promise to Jordan and calls, leaving a message to say that she will be publishing the letter from the killer on page one.

Brook Lynn and Chase head into Kelly’s to meet Linc and Blaze. Neither of them is there yet. She vents about Linc having critiques of her latest song.

When Linc and Blaze arrive, the singer says she’s not happy with the song’s arrangements because they don’t show off her range.

As they debate this, Chase and Brook Lynn notice how Linc keeps feeling Blaze about and try to control themselves.

Linc points out that Blaze is the one with the following, not Chase. Brook Lynn asks him to the bar to talk.

Left alone, Chance comments on how “handsy” Linc is. She dismisses this and says she’s worked hard to get where she is. She’s not giving that up by getting a reputation for being difficult.

She admits the song is fine and she was just posturing. They talk about what direction she wants to go. She wants to go in a folk direction. That’s a surprise to him.

They discuss how his heart isn’t in singing. He still just wants to be a cop.

They talk about his close connection with Brook Lynn. She points out their business relationship is pretty one-sided and he says he would do anything for her.

As she leaves for a costume fitting, she bumps into Dante, who tells her his son listens to her music.

When he sits down with Chase, his old partner explains he’s doing a song with her. When Dante mentions the hearing and the letter that Brook Lynn offered to write, Chase is confused.

At the bar, Brook Lynn lectures Linc for being sleazy. He brags about being close to siding Magdalena Perez and she threatens to expose him as a creep.

If he was so awful, he wonders why she’s working with him now. He taunts her to do her worst because no one will listen to her.

He squints as she threatens to set his life on fire. “Or, you could get your songs back,” he suggests.

Cody arrives at Britt’s office in General Hospital. He notices the place has been trashed and asks her if someone tried to steal the necklace.

She doesn’t want to talk about it, but he wants to help. Britt starts venting about her father. The WSB has his brain in a jar and his ashes are in the air.

Even now that he’s dead and gone he’s still hurting her. She spent most of her life striving for his approval and now he’s gone.

Cody says that if he couldn’t appreciate her, that’s on him. That’s easy for him to say since he hardly knew his family. He knows what it feels like to be a burden.

Cody assures her that she’s definitely worth loving. She tells him that her father’s legacy keeps lingering with her. He assumes she’s talking about the necklace.

Cody urges her to give it to him.

“You think this is about a necklace?” she asks. He’s confused.

She yells at him, shoves the necklace in his face, and orders him to get out.

As she shows him the door, Robert arrives with a warrant for the necklace.

After some argument, Robert takes the necklace and exits. Britt orders Cody out. He closes the door and asks what legacy she was referring to if she didn’t mean the necklace.

They bicker and she refuses to explain. He’s apologetic and asks what it will take to get the benefit of the doubt.

That’s more than she’s willing to give.

Obrecht interrupts and Cody takes off.

Britt admits to her mom that she is sick.

In the corridor, Robert has the necklace placed in a suitcase and cuffed to his wrist. Victor’s goon watches this and calls his boss to fill him in.

Willow and Michael are in the corridor when Carly bumps into them and wonders why they are there.

When TJ pops up, Willow asks him to step aside to talk. Once they do, Michael informs his mom that Willow is looking for her birth parents.

She flashes back to learning Nina is Willow’s mother. He claims she just wants to know family medical history since she has a baby on the way.

Meanwhile, Willow tells TJ that she can’t risk Wiley finding out she is sick because it would scare him. They need to keep this as quiet as possible.

They return to Michael and Carly and talk about the holidays. They fill Carly in about Nina accusing Willow of sleeping with TJ and Sonny believing her.

After they vent about that, Carly takes off. The couple thanks TJ for all his support.

On the pier, Victor accuses Holly of lying to him when she claims she’s done all she can to convince Robert she has no memory of the past two years.

She insists he’s the one person she’s not lying to. He makes it clear that he will kill Ethan as easily as he killed Luke and Paloma.

The Cassadine pokes her about always playing second fiddle to Anna. He taunts her about that and she taunts him about Valentin. Holly thinks he will be lonely when he has no one to share his future with.

She demands to speak to her son to make sure he’s alright. He reminds her she’s been getting proof of life photos every day.

After Victor gets a call about the necklace, he tells Holly that she will have to get Robert’s briefcase. The WSB are on their way to get it, so she needs to think of something fast.