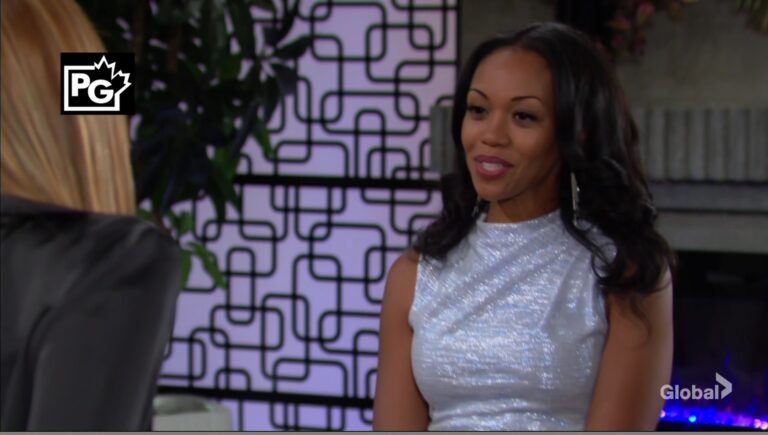 The Canadian Y&R day ahead recap from the Thursday, July 29, 2021 episode, which airs in the USA Friday, July 30. In the previous episode, Mariah begged her captor to tell her who they were and what they wanted. In this episode, Phyllis finally gets somewhere in her quest to find out what Tara and Sally did to make Summer move to Milan, Connor and Rey return home, and Jack and Kyle finally get a clue of their own that Tara and Sally aren’t what they appear.

Amanda wanders into Grand Phoenix, glowing. Phyllis asks why and asks her to spill when Sally appears and tells her she’s crossed her one time to many. Phyllis smiles. She tells Sally she gave a copy of the recording to Jack. Sally worries if it’s even legal but Phyllis is surprised that’s all she’s worried about. Jack has plenty of reasons to doubt her. Sally says, “How dare you?” Amanda watches as Phyllis says Jack has seen the light. “You’re spiteful and vicious.” Phyllis admits it. “Yes. Yes, I am.” She invites her to tell her what she did to drive her daughter out of town. “Or things will get much, much worse for you.” Phyllis won’t stop until she gets the truth. Sally stalks out and Amanda asks if her friend has proof of what they did. “I have zero,” she says. Pointing at her head, she continues, “I have this. Those two little girls know that I’m on to them. They’re afraid and they’re rattled and soon, they’ll make a mistake. And when they do, I’ll be right there to take them down.” Amanda reminds Phyllis she’s her lawyer and asks what happened. Phyllis fills her in on stealing Sally’s phone to send a fake text and then sending footage of them in the elevator freaking out. “Conspiring.” Amanda calls Phyllis out for playing with fire. Phyllis asks her to help her out instead of judging. Amanda will help put the pieces of the puzzle together. She and Billy tried to consider all angles but they got nowhere. Amanda says to put Sally aside and focus on Tara. She has a feeling Tara’s the key to the mystery. They go over how things went down with Summer’s new job and move. Amanda wonders if it was all chalked up to timing but Phyllis doesn’t believe in that. Tara latched on to Ashland, one of the biggest billionaires in the country. Amanda wonders if Phyllis is projecting her own past onto Tara but Phyllis denies it. They realize Sally told Summer about the job offer. Sally claimed she was interested. They need to find out how it happened. Phyllis will call Angelina who is in L.A. right now to promote her fall line. She used to work with Francesca in her PR days. She calls the woman and they catch up. She has a favor…Later, she talks to Angelina and learns Summer is doing well and that Eric Forrester recommended her for the job. Phyllis is startled and then tells the woman she’s on her way to Los Angeles. She looks up and sees Nick frowning.

Tara is surprised to see Kyle sitting in the living room. He got in earlier. She was on the phone with Sally. Tara tells Kyle it was so hard, one of the hardest moments of this whole ordeal to break the news to Harrison. “I am so glad you’re home,” she says, verklempt. She tells Kyle that Ashland has decided on treatment and that Ashland seems to accept it. Kyle’s not sure how much he comprehended and thinks the kid might have Ash in his life longer than they thought. He asks what the call with Sally was. Tara lies that she was apologizing to her. She claims to feel sorry for her and hopes Kyle doesn’t listen to her. Tara asks if he still trusts her. He turns the talk back to them needing a place to stay and him having Harrison closer. Tara pushes, again asking if he doubts her. Kyle calls Sally a master and worries she’s up to something. Kyle asks how she sees things going forward. She’s not sure. He tells her she can stay as long as she wants ad they’ll co-parent with Ashland as long as they can. He thinks she’ll want to date soon. Remarry. He doesn’t want to keep her from getting on with her life. Tara’s been lonely and when he asks what there is to do about it, she tells him, “If only there was a simple answer.” Jack arrives and asks Tara to leave them alone. She goes and Jack fills his son in on dumping Sally. “Good for you,” Kyle says. Jack knows Phyllis has crossed lines but it’s looking more as though Tara and Sally are more than colleagues. They ponder if both women are hiding something. Tara eavesdrops and then leaves when Jack says he can’t dismiss this entirely. Too many things just don’t add up. Later, Tara appears. She’s going for a swim. Kyle takes off and Tara hopes that if Jack has concerns about her that he’ll talk to her. She wonders if she and Harrison living there is too much and Jack reassures that her child is family and they are both welcomed there.

Chloe arrives in Adam’s office at Newman Media. She complains that the internet and her fridge aren’t working, the lighting is all wrong, and she needs an ergonomic chair. Adam jokes that he was up all night thinking of ways to annoy her. He invites her to order whatever she needs. She’s stunned into silence. He finds that amusing. She shoots him a dirty look. He ignores her and tells her Connor’s home. He has to go.

Connor and Rey arrive at Crimson Lights. Sharon greets them happily and Connor shares that his grandma is healing. Sharon knows his dad can’t wait to see him. “He talks about you all the time.” Rey’s smile drops. “You and Adam have been in touch?” They send Connor to a table while they get drinks and Sharon explains he talked to him a few times. Rey asks if he was playing on her sympathies. “No, he was just a dad who missed his kid.” She wants to hear about his trip but first wants a kiss. Adam strolls in as they kiss off-screen and pulls a face. He sits with Connor and they catch up. The tyke wants to see his grandparents but they’re in Milan. They can go riding, but first he has to pick up his laptop from the office. Rey’s back is turned when Adam looks at Sharon. “It was lonely, here on my own.” Sharon looks away. Adam thanks Rey for everything and they leave, while Rey and Sharon make goo-goo eyes at one another. They get a table and catch up about Faith meeting her favorite band. He asks after Mariah. Sharon talks about her vague texts and Rey comforts her. Talk turns to Chelsea. Rey finds it interesting to see her in a new environment without Adam. She and Connor were with Anita 24/7, so he didn’t get much time with her. He tested her, gave her opportunities to leave and she didn’t. Local authorities are checking in on her and she’s required to take a cell phone with her, which is being tracked. Sharon’s incredulous that Rey has forgiven her. Rey thinks she truly regrets what she did and deserves a second chance. “You, my love are the kindest, most generous man I have ever met.” Rey jokes, “If you’re into that sort of thing.” Sharon flashes to Adam thinking it was his more wild side she found more compelling and how she reacted by saying she was pulled to him as she helped him become a better man. Sharon tells Rey she loves everything about him. She’s grateful to be married to such a good man. He’d rather she call him sexy. She does think he’s sexy. They find a book Connor left behind and agree she’s a good mother despite the other awful things.

Chloe arrives in Adam’s office and slips some documents into a tray before she picks up a video call from Chelsea. Chelsea hears she’s in Adam’s office and worries. “Are you trying to get fired?” Chloe says Adam’s been keeping his word and things are fine. When she’s ready, she can come back to work for him. Chelsea tells her friend about her realization that she twisted things up with Adam, blamed him for everything when most of her issues were all in her head. She’s ready to let her anger go. Chloe purses her lips. She wants her friend to keep things strictly business when she returns.

Adam walks in on Chloe talking to Chelsea in his office. Connor chats with her and Adam takes his laptop. He needs to get Connor home. He says goodbye.

At the ranch, Connor talks about his dad making plans for when his mother comes home, before he goes off to pack.

Sally finds Kyle drinking alone at Society and asks why everyone is trying hard to ruin her life.

Phyllis goes to see Eric Forrester about Summer. He thinks she’s digging for information and questions her.

Tessa and Abby discuss a group text from Mariah. Tessa wonders why she’d sent such an important text to the group. Abby doesn’t think Mariah is coming home.

Victoria and Ashland make plans to go away on a trip after the merger goes through. “We can make it a honeymoon,” Ash says. Victoria looks surprised.