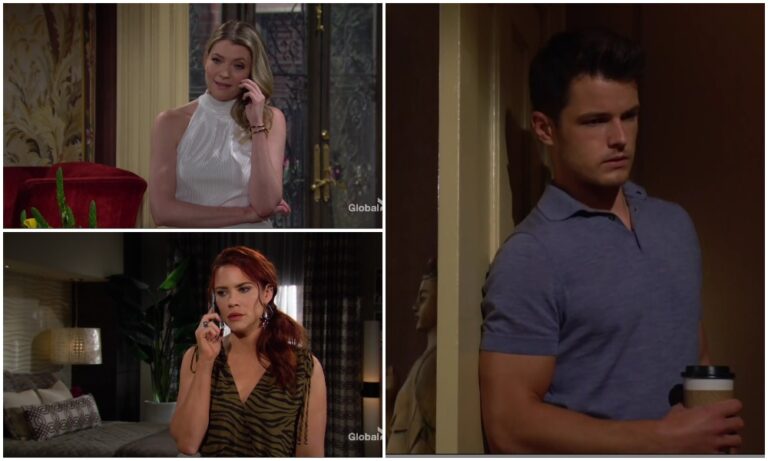 The Canadian Y&R day ahead recap from the Wednesday, July 28, 2021 episode, which airs in the USA Thursday, July 29. In the previous episode, Mariah begged her captor to tell her who they were and what they wanted. In this episode, Jack can’t be with Sally anymore, and he lashes out at her and Phyllis, Devon and Amanda tell each other they love one another, and Ashland tells Harrison he’s ill.

At home, Kyle and Jack watch the elevator recording again of Tara and Sally arguing over the text. There’s no audio so they theorize that Tara found out something about Sally and they argued. Kyle wonders if Phyllis is reaching and that there’s a simple explanation.

At Grand Phoenix, Phyllis continues to deny sending a fake text to Tara from Sally’s cell phone. Phyllis asks Sally why she would. To get Tara to come over and confront her? Sally says that never happened. Phyllis says they argued in the elevator. Sally’s shocked, realizing she saw them argue in the elevator. “Did you spy on us?” Phyllis says, “The camera isn’t hidden.” Sally calls her out for snooping on a private conversation. “It’s a camera, not a confessional.” Tara appears. Sally tells her what happened and Tara tells her not to get her involved in her drama. She goes and Phyllis smiles. “Wow. How does that feel, getting thrown under a bus.”

Devon arrives home to Amanda and tells her to get champagne. Sutton Ames is going to pay for what he did, finally. Amanda’s not so sure. She wants to focus on the two of them, not Sutton. Devon is good with that. He goes upstairs and returns in a gorgeous outfit. Amanda’s hot for him and tells him seductively that they’re not going to make it out. They head upstairs for sex and return later for wine. They discuss how things would have been if she had been raised by Richard. They theorize on whether or not Naya wanted the truth out, since she didn’t push Amanda out of her life. “She hung on to her daughter, which makes me believe that your relationship can heal.” Amanda’s thankful for his encouragement. He says it’s easy to do because he loves her. “I love you too,” she says.

Victoria finishes packing and Ashland tells her the jet is ready. He made an appointment to see the specialist in New York about the treatment options. She knows it wasn’t an easy decision. He knows that it’ll possibly extend his life but doesn’t want her to get her hopes up. Victoria will be with him each step of the way. She calls and talks to Johnny and asks if Ash wants to see Harrison first. He wants to wait. He finds Tara irrational and doubts she’d allow him to talk to Harrison alone. He worries his son will pick up on their tension. They can’t predict what he’ll remember about him when he grows up. He wants their talk to be calm, comforting and reassuring. Ash is sure Tara would make it all about her. Victoria thinks she’d want to be there if Billy had something to tell their kids. Ashland considers her perspective. He thinks she’s easier than Tara.

Tara arrives home. They tell her they received a “strange message from Phyllis.” Tara isn’t surprised. She’s been spying on her. Kyle asks why she went to see Sally when she said she wanted time for herself. Tara reveals she received a troubling text that made no sense so she confronted her. She claims she can’t recall what the text meant and she deleted it. It was something to the effect of “Phyllis is a problem.” Tara’s shocked when she watches the video of her and Sally arguing. “What was that all about?” He asks. She turns things around, calling Phyllis obsessed. Tara tells them she reacted emotionally when Sally showed her she didn’t even send that text. She claims she’s embarrassed and asks Kyle for help. “I have faced down some vicious women in my life,” she says but this is more than she’s encountered. Jack already asked Phyllis to ease off and Kyle admits he did too. He explains he told her Tara wasn’t involved in Summer leaving. Jack takes off to see Phyllis. Tara goes to see the kid and returns and is glad that their toddler is more mature than some of the adults she’s been around lately. Kyle defends Phyllis in a sense since he knows she is protective of her daughter, but he’s been on her shit list a few times.

Ashland appears at Abbott’s mansion. Kyle leaves him to talk to Tara. Ash is going to New York and wanted to see Harrison first. He has no objection to Tara being present when he breaks the news to Harry. He also admits he’s starting treatment for cancer after all. He’ll fight this. She claims she’s glad. It’ll give them hope. He’d like to do it now. She goes to get the tyke. Harrison hugs his dad when he appears and Ash tells his kid he feels “yucky” and is going to New York to see a doctor to help make him feel better. Harrison takes it well and they snuggle.

Jack stops by the hotel to confront Phyllis about stealing Sally’s phone to send a fake text. She doesn’t deny it. He tells her to back off Tara. Phyllis clutches her heart, “Oh, poor innocent Tara.” Phyllis knows Tara’s afraid of getting caught. “She’s living large at the Abbott mansion, isn’t she?” She doesn’t want to lose her new connections. She thinks he’s turning a blind eye to everything. She cries, “I’m the scapegoat here,” and swears “those two little girls” ran her kid out of town. Why doesn’t she and Summer get the benefit of the doubt? She encourages him to talk to Sally. He resents that and goes. Upstairs, Jack asks for Sally’s explanation about the text. Sally says Phyllis has it out for her. Sally claims she never saw the text and doesn’t know what it said. Jack’s shocked. “Phyllis deleted it from my phone,” she says. Jack pulls out the security footage and shows her. “She is clearly showing you the text.” Sally says she didn’t read the words. She only saw it was from her phone. Jack yells that he can’t trust her to tell him the truth. Sally deflects blame and Jack can see it’s instinct. He can’t build a relationship with someone he can’t completely trust. She thinks they can get past this. Jack worries they’ll always end up here. He needs more than that and goes. He finds Phyllis downstairs. She asks how it went. “None of your business,” he says. Phyllis isn’t enjoying this. He tells her she’ll never change. “You say that like it’s a bad thing.” He stomps off.

Kyle sees Victoria at the coffee house. They discuss how he just left Ash and Tara and that Kyle didn’t know he was a father for years. Victoria thinks she’s good at keeping secrets. He shoots her a look and she apologizes. Are they rekindling things? He says no. She tells him to be careful and goes.

Ashland returns to Victoria’s, ready to go. Things went well with Harrison. He says Tara’s got Kyle wrapped around her little finger, but he didn’t hover. She knows. She saw him at the coffee house.

Back at the Abbott mansion, Tara receives a call from Sally, bitching that she lost Jack over this whole thing. Tara tells her not to worry. Jack will come around. Kyle eavesdrops and hears Tara say to let things calm down. Sally thinks she’s on thin ice, too. Tara says she thinks things on her end are fine. They both gave the same explanation for the elevator conversation. “You handled it the best way you could.” Kyle looks puzzled.