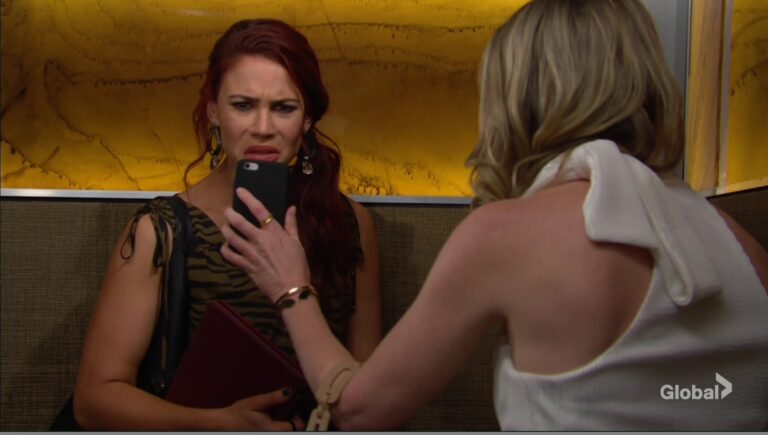 The Canadian Y&R day ahead recap from the Tuesday, July 27, 2021 episode, which airs in the USA Wednesday, July 28. In the previous episode, Ash wants treatment for his illness after learning Victoria is in love with him. In this episode, Phyllis watches her plan in action with Sally and Tara and sends proof that they are colluding to Jack and Kyle, while Nate has big news for Elena.

Lauren walks in on Jack ordering flowers to be sent to Sally. She’s surprised to learn they’re giving it another shot. She has no issue with that and admits she’s shining at JVC. Lauren’s thining of making her job permanent. She notices Jack’s wearing Dina’s Teardrop of Love cufflinks. Jack says he wouldn’t go that far. He thinks they’re working for her and Michael. Lauren admits they’re doing really well. They talk about Harrison and how he wishes he could have met Dina.

At her hotel, Phyllis finishes texting Tara while Sally has found three more erroneous charges on her bill. Phyllis is sorry. She’ll give whoever is in charge an earful. Sally reminds her she’s the boss. “You’re right. I am in control,” she says, deleting her text to Tara. She brings back her books and sets them down on the table. Sally says she won’t pay for any of these. “You’re right. You won’t be paying for anything you’re not responsible for. I promise you that,” she says. Later, Phyllis removes the charges and promises it won’t happen again. She offers a free day at the spa. Sally thinks she’s being overly nice. Phyllis offers training sessions with her super hot trainer. “He still has a crush on you,” she admits. Sally isn’t sure Jack would like that. “You can just owe me one,” Sally says, leaving. Phylis definitely owes her one. She’ll be making good on that.

At home, Tara makes it sounds as though Ashland was unreasonable with her. “I feel like he is weaponizing telling Harrison the truth, and now it’s a ticking time bomb.” She wants to tell Harrison with Kyle at her side. Kyle worries it’ll anger Ash. Tara acts as though if they don’t, she is concerned he’ll do something. Kyle disagrees. This is something she and Ash should do and there’s no rush. Tara agrees. Maybe he’s seeing things clearer than her. When he notices that she’s pacing, he tells her she looks anxious. Is something else is bothering her? She gripes about one thing happening after another. She asks if he minds looking after the kid so she can go for a walk.

Nathan tells Elena he wants to take her out for expensive champagne. He tells her to go get dressed for a date and they’ll meet later. He jogs off.

At Crimson Lights, Abby thanks Devon for being a great friend. He thinks she’s one too. He asks after Mariah. She’s worried more than ever. She said she’d be home before the next doctor’s appointment. Abby vows not to nag Mariah when she returns to Genoa City. She knows she’s gone too far in the past. Devon’s glad she’s respecting her privacy. They’ll be just fine. She hopes so. She realizes she hasn’t been asking him how he feels about all of this. He knew what he was getting himself into. He’s happy to be here on this journey. Talk turns to Abby again and Chance. She thought he’d be here with her. Devon tells her she has a lot of friends and family to get her through this. She tries to get him to talk about himself but everything is good for him. Work is great, Moses staying with him has been fun and the main source of happiness comes from Amanda. He grins. He talks about all the stress Amanda is going through. Abby thinks she’s exactly what he needs. They had an odd start but connected. Abby asks how she feels about the baby. She has been supportive since day one. He asks how Ben feels. She says he’s happy for her. She’s glad he’s moving there for a job at Memorial. He’s an old friend. That’s all there is to their relationship she feels the need to assure her friend.

Mariah wakes up with a start and looks at her surroundings. “Good morning kiddo,” she says to the baby. She does some breathing exercises to pass serenity on to the child.  She tries to pretend there’s a sense of normalcy here. “I’m staying relaxed. I’m not agitated. I’m not claustrophobic,” she says. She says she’ll try again and goes to the door, trying to open it. She bangs on it. “Hey, hey, as much fun as this stay has been, me and this baby would like to get out of here now, please. Please?” When nobody comes, she says, “I guess we’re still prisoners.” She’s screamed, begged, and threatened and the person is giving them the silent treatment. She vows to find a way to get them out of there. A noise comes from the dumbwaiter. “Here we go again,” she says, watching. She gets her dinner and prenatal vitamins and tries not to panic. She yells as she pounds on the dumbwaiter and asks, “Who are you and what do you want?!”

Nina walks in on Tessa in the living room. She is still considering using the app to find out where Mariah is. Nina says Mariah’s her partner and she has to do what she feels is right. She cries that she loves Mariah and can’t stand that she’s away. “I’m turning on this app to track her phone.” She does. The location is blocked.

At Society, Nate has news. They flirt a little and he calls a server over for their finest champagne. He tells her he’s the new Chief of Surgery at Memorial, (the one that Stitch told everyone he has). They toast and drink, happily.

Jack arrives home. Kyle’s in a crappy mood. Jack gets him to talk. He tells her that Phyllis thinks Tara is involved with Summer leaving town. Jack has heard about it. He’s told her to drop it. They talk about Phyllis thinking Tara and Sally are working as co-conspirators. Kyle says it got to him but he doesn’t think Tara is scheming. Jack agrees she’s not capable of being devious. “Sally, however,” Kyle says. Jack defends Sally. He admits they’re dating again. Kyle is concerned about that.

Sally meets Tara at the hotel. She wants to see if they can collaborate on her shoe line. They get into the elevator to go up to Sally’s suite as Phyllis eavesdrops. When the elevator door closes, Phyllis watches them on the camera as Tara stops the elevator. “What were you thinking sending me that text?” Sally doesn’t know what Tara is on about. Tara shows her the text from Phyllis telling her that Phylis has figured it out. Sally looks at her phone.  She shows Tara that she didn’t send it. She realizes Phyllis must have. Later, Phyllis has sent the video file to Jack and Kyle. The men watch the women yelling and wonder what the argument could have been about since there’s no audio. A few minutes later, Sally gets off the elevator and gets in Phyllis’ face. Sally calls her out on distracting her with the bill charade and using her phone to send a text. Phyllis feigns innocence. Sally thinks she’s making a big mistake underestimating her. Phyllis assures she isn’t. But she plays along. What if she did send that text? “Why are you so scared?” Sally says she impersonated her. “That is identity theft.” Phyllis taunts her. “Come clean right now, tell me what you and Tara did to my daughter,” she warns.

Meanwhile, Tara paces in Sally’s suite. Kyle texts her and tells her to come home. “We need to talk.”

At the mansion, Jack tells Kyle that the video warrants a conversation.