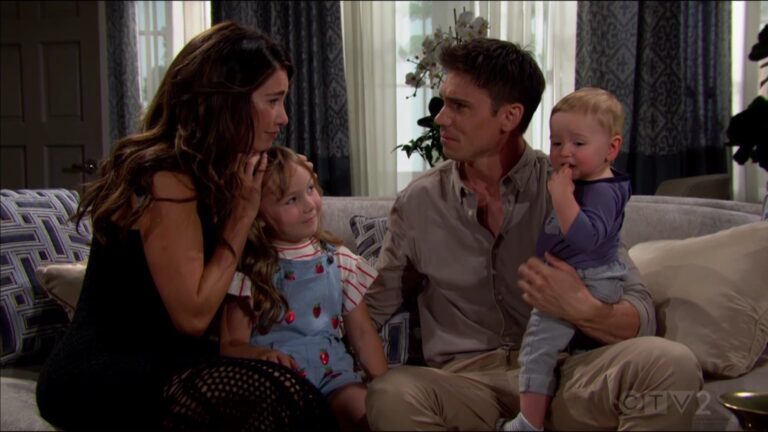 In the Tuesday, August 2, 2022, full episode recap of CBS’ Bold and the Beautiful, Steffy and Finn have a family reunion, she wonders why Li lied to her, and Deacon thinks fast and lies to Baker, while Ridge updates Brooke about the Steffy and Finn reunion.

We also have Monday’s B&B recap where Finn reunited with Steffy in a loving embrace.

The bells toll as Steffy and Finn enjoy their loving reunion in Monaco.

He tells her he’s missed her so much and she repeats, “You’re alive. You’re alive! Oh my God!”

She cries and he kisses her. She sobs uncontrollably in his arms.

In Steffy’s house in Monaco, Ridge and Taylor can’t wait until Finn finds Steffy and this nightmare is over.

They imagine what it’ll be like when he sees her.

Finn and Steffy arrive and there are hugs all around. Steffy repeats to her parents, “How is this possible?”

They leave the two alone and Finn tells his wife that Li helped him recuperate until Sheila came along and acted like she saved him.

Steffy says none of that matters. He’s there. She had dreams of this. She makes him tell her, “I’m here,” on repeat.

“You’re in my arms again, thank God,” he says. She repeats, “Oh my God.” He explains what happened as much as he can.

She realizes it makes sense now. But why did Li hide him from her? “I’m your wife. I deserve to know you’re alive.”

He can’t explain but she refused to give up on him.

He’s sorry. He tells her he willed himself to keep taking breaths, “And it was all for you.” They embrace.

At Deacon’s new apartment, Baker bangs on the door. He wants to talk to him about Sheila. Inside, Sheila whispers for Deacon to hide her.

They don’t know she’s there. “Go,” he whispers, and she hides in another room while Deacon rips off his shirt and pours water from a bottle over his head.

He grabs a towel and apologizes for the delay. He’s rushing to get ready for work. Baker asks if he’s seen Sheila and Deacon lies that he hasn’t.

He agrees to call if he does and Baker goes.

Sheila reappears with a thank you. Deacon’s pissed. He’s not going back on the inside for anyone. “This place is a dump but it’s mine.”

He accuses her of using him but she denies it. She asks if he wants her to beg for his help. “I never meant for any of this to happen.

I just wanted a chance to know him. ” Deacon reminds her she almost killed him. She denies it and says she nursed him back to health to be with his family.

He’s probably reuniting with his family, now. Deacon has to go, just in case Baker is watching. After he’s gone, she needs to leave.

Sheila acts like she’s so hard done by but Deacon doesn’t care. “We’re done. Do not come back here again, do you understand me?”

He takes off and she locks the door behind him. She bangs her head against it a few times.

At Forrester Creations, Zende thinks it’s crazy that Finn is alive and reuniting now with Steffy. Brooke and Hope tell him it’s true and Brooke checks her phone.

She’s been waiting for Ridge to call. Hope imagines that the pain and loss Steffy’s feeling will be gone.

Brooke chimes in. Sheila can’t hurt them anymore. She hopes the authorities can put Sheila away for good this time.

He tells her that Finn and Steffy have reunited. She calls it a miracle. He says they’re in shock. Ridge says Finn is fine, and feeling joy.

He lets her know Sheila escaped again. “What? No! How?” Ridge fills her in on the arrest.

She keeps yelling, “No! No!” He tells her what she should focus on, instead of Sheila. They disconnect and Brooke tells the room. Hope has a canary.

They should let everyone know. Brooke says they will but let’s not make “that overshadow the joy we’re feeling in this moment.”

She says Ridge sounded so happy.

Back in Monaco, Taylor and Ridge talk at length about the Steffy and Finn reunion.

Later, Taylor brings the kids to Steffy and Finn, who have a family reunion.