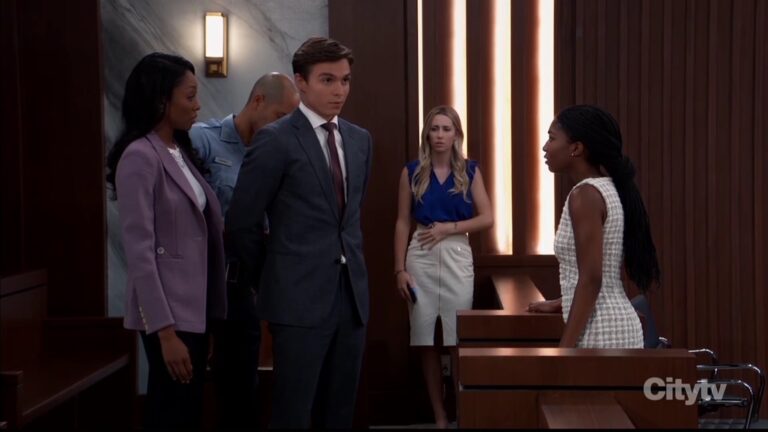 General Hospital recap for Tuesday, August 2, 2022. In today’s GH episode, Jordan and Curtis put some pieces together, Willow has a biopsy, and Trina testifies.

We also have Monday’s GH recap where Willow learned she may have leukemia and Esme tumbled off the turret while fighting with Ava.

At Wyndemere, Nikolas rushes into the turret room as Ava wrestles with Esme, who goes over the side and plummets. Ava says they were fighting over a letter. Nikolas can’t see her anywhere.

She wants to call the cops but he points out the cops will think she did it. He tells her to leave and he’ll sort out the room.

Ava goes to her bedroom to check her bruises until the prince arrives. He’s only found a shoe. Ava reminds him that fall isn’t necessarily fatal, as she knows from experience.

She recounts what happened before Esme went over the edge. It sounds like self-defense to him but she thinks the cops will assume she’s the aggressor.

Everyone knows she hated her and her DNA is all over her. He says that likely washed off when she hit the water. No one needs to know what happened.

She wonders what happens if Esme turns up alive. Nikolas promises he won’t ley anything happen to her.

At General Hospital, Willow paces in an office while she worries that she may have leukemia.

Michael looks around for Willow and can’t find her so he calls to leave a message. Spotting TJ, he asks where she went.

The doctor claims he hasn’t seen her and flashes back to Willow asking him to stay silent about her test results. Michael thanks him for being so good to her.

TJ wishes him every bit of happiness with Willow and their new kid. “How lucky can I get?” Michael wonders.

Britt and Terry enter the office to meet with Willow. Liz will be there with the results soon. Terry explains that she’s reviewed them and they seem consistent with adult onset leukemia.

“What does this mean for my baby?” Willow asks. Terry wants to perform a bone marrow biopsy as soon as possible. Willow wants to do it immediately and without a sedative.

Britt offers to call anyone she needs but Willow wants to do this alone.

They head in for the operation immediately and then Terry leaves with the bone marrow, telling Willow how well she did. Britt says she’s the bravest person of the year.

Sitting down, she tells her that she’s still brave if she wants to share. Willow thinks it sounds like she knows what she’s talking about.

When Willow leaves, she bumps into Michael and tells him she just had some more tests.

She assures him everything is okay.

Curtis sneaks around and swipes a medical file. As he turns around and takes photos of it, Jordan interrupts so he shoves it in his pants. She doesn’t want to know what he has.

They talk about Oz going unconscious and Curtis says he’s sure that Esme drugged him. There’s lots of DNA at his place but it could take months to dig up the evidence they need.

When Jordan gets him coffee, he puts the file back.

She returns and tells him that Spencer was asking Britt about the drug used on Oz. He assumes that’s no a coincidence.

She adds that Esme had access to it. They wonder if she could have done it. She must have found them through less legal means. It’s possible she used the same drug on Trina in the cabin.

Jordan is determined to do all she can to get information out of Esme.

She gets a call and then tells him this could have repercussions for Trina.

Curtis tracks down TJ and asks him to help get Oz out of his medically induced coma. The doctor points out it could kill him.

As Liz walks down the stairwell, she flashes back to finding Peter’s body. She has to sit down and hears the word, “Daddy.”

While she’s hyperventilating, Finn jogs down to her. She doesn’t know what’s happening so he gets her to take a deep breath. The doctor helps her up, leaving the paperwork behind.

He takes her to his office and gives her some water, asking what happened. She claims she just lost her balance on the steps.

He notices she was pretty out of it.

Liz insists she just pushed herself too hard. He thinks she needs a neurologist. If she doesn’t want to do that for herself, she should do it for her kids.

“How dare you accuse me of not being able to look after my kids!” she snaps. He’s not saying that, but if something is wrong, doesn’t she want to know. She storms out as Terry arrives.

Finn tells the doctor that something is very wrong.

In the court room, Spencer attentively listens as Diane questions Trina about her feelings for him. She admits that she had romantic feelings for him but doesn’t anymore.

He seemed to just see her as a friend and never reciprocated.

The lawyer asks if Esme was aware of her feelings for her boyfriend.

Trina starts listing things Esme did but the ADA objects, pointing out that Spencer has already been found guilty of those things.

Diane prompts Trina to talk about how she would never do anything to jeopardize her friendship with Joss and Cam.

When the ADA crosses, they rehash what she remembers from the evening in question. Trina insists that Esme set her up, even though she can’t remember much.

She repeats that Esme planted all the evidence, but she has no proof. Maybe she dropped it in her bag when she visited Spring Ridge?

The ADA points out any of staff that day could have done it.

Diane objects and then re-directs. She gets Trina to talk about how much Joss fought with Esme for months before and after the cabin. Esme threatened her once.

After Diane gets Trina to say how much she loves her friends, she’s allowed to step down.

The ADA gives her summation and then Diane provides hers, pointing out that the evidence is purely circumstantial. Esme had means, opportunity, and a more compelling motive than Trina did.

After the jury leaves to deliberate, Trina’s parents tell her how proud they are of her. She hugs her mom and smiles at Spencer.

Joss corners Spencer. She tells him he did a nice thing for Trina and should leave it at that. Joss would pay money to see Esme’s face when she finds out what he did.

Jordan shows up and arrests Spencer.