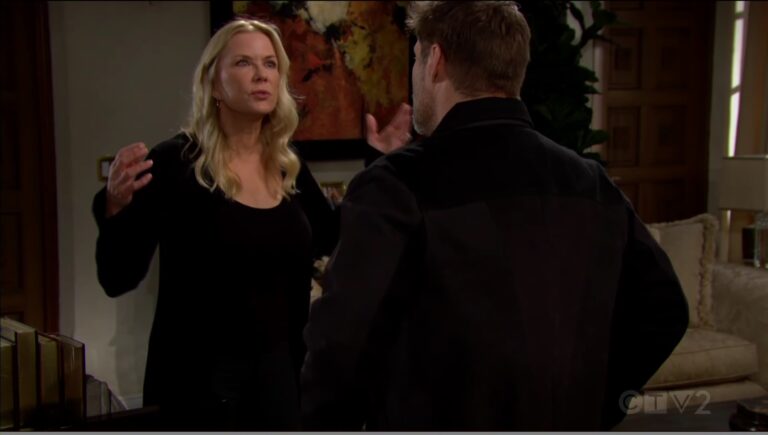 In the Wednesday, January 12, 2022, full episode recap of CBS’ Bold and the Beautiful, Steffy’s tired of Brooke not showing up for work, Deacon loves Brooke and Sheila’s bent on revenge still. We also have Tuesday’s B&B recap where Ridge and Carter praise Paris for a job well done and Hope begs her mother to tell her why Deacon’s missing.

Petra models a black shiny get up at Forrester Creations. She mentions that Brooke was supposed to take a look at these. Steffy tells her to go change and she’ll forward the photos to Brooke.

Once she’s gone, Thomas asks what’s going on with Brooke. She hasn’t been to the office in days. Steffy says she’s been acting strange since New Year’s Eve and they wonder if she was sulking because he couldn’t make it home.

She calls it petty, even for Brooke. Thomas wonders if it’s something else. Steffy’s trying to hold back judgment but the company comes first.

At home, Brooke paces and flashes to drinking with Deacon and winding up in bed with him. Ridge asks if something upset her in the meeting. She says no.

She just doesn’t get why she drank. He’s sorry he left her alone and promises she’ll never feel that kind of loneliness again. They hug.

New comings and goings at B&B

At the bar, Deacon mops the floor and the server asks what the rush is. He’s off to see someone special. “Rush all you want, as long as you’re thorough,” the guy says. He goes and Sheila pokes her head in. She asks if he’s referring to Brooke or Hope. He looks at his bare arm and says he’s busy.

She grabs him and asks if it’s a new watch. “Yeah, it’s called mind your own business,”  he says. She laughs and he keeps mopping. Why is she there? She’s living vicariously through him. When she learns he hasn’t seen his daughter or her mom since New Year’s Eve, Sheila questions him.

He tells her he’s been busy as he flashes to Brooke telling him he can’t come back ever. Sheila laughs when he says he’s had work obligations. She thinks he’s putting Brooke’s interests ahead of his own and thinks it’s her idea.

He tells her he has to go and wheels the mop bucket away while she laughs that it must have been one heck of a New Year’s Eve. She stares at the alcohol and again vows to destroy Brooke’s life.

Back at Forrester, Steffy and Thomas tell Ridge that Brooke was a no show again. “What is going on with your wife?” He’s silent so Steffy says if it’s none of their business he can tell them. He appreciates their concern but says Brooke will be fine.

Steffy says Brooke’s made choices that he doesn’t approve of. They bring up Deacon having all access to their lives. Ridge listens, silently. They relay their concerns and they wonder if Taylor’s return will keep him out of another scandal with Brooke.

He needs to take control of his life before Brooke brings him down again. Ridge still says nothing.

Deacon appears inside Brooke’s house and startles her. He can’t stop thinking about what happened between them. She’d rather put it out of her mind. He assumes she’s thinking about it as much as he is.

He can’t stop thinking about kissing her. She doesn’t know what happened that night. He encourages her to go to a meeting and she admits she has — with Ridge. She told Hope and Ridge she got drunk but not about them kissing or waking up together.

Deacon’s shocked. He tells her he should be coming around more. It’ll raise suspicion with Hope and Ridge. It’ll raise red flags. Brooke is exasperated. She can’t see him anymore.

Why doesn’t he get that? He brings up Taylor’s name and Brooke is sure that woman’s waiting in the wings somewhere. Deacon thinks their daughter would want to see them together but Brooke wants to be with her husband. He’ll leave her if he finds out what happened. Deacon yells that he can’t do this anymore.He’s buried his feelings for as long as he could. He yells that he loves her. He’s always loved her and he always will. Brooke looks shocked.