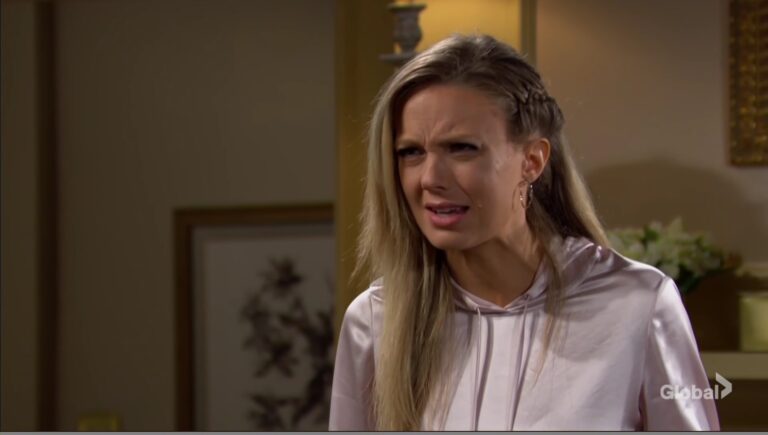 Canadian Y&R day ahead recap for Thursday, January 13, 2021 episode, which airs in the USA Friday, January 14. (Recaps live by 5:45 PM EST daily.) In the previous episode, Adam refused to go away with Sally. In this episode of CBS’ The Young and the Restless, Devon struggles with his decision to go forth with the custody case, while Chance sneaks out again, and Rey tries to find a moment alone with Sharon.

At home, Chance has a nightmare as the baby plays in his bassinet. Chance tosses and turns and calls out, waking himself up in the process. Dominic begins to cry and he goes to him, apologizing. Abby rushes into the room and asks what happened. She heard him yell and the baby cry.

Chance reveals he had a nightmare but can’t remember what it was about. Abby rocks him and he falls asleep. She puts him back in his bassinet and Chance tells her that she’s so good with him. She admits she’s heard him wake up from nightmares before. He’s sorry he’s waking up “the whole house.” She asks if he has considered therapist or talking to Sharon. He has and says he would if he thought it was necessary. Being with her and Dom is what will get him through this. They kiss and head upstairs to make love. Later, Chance sneaks downstairs, buttoning up his shirt. He looks in on the kid who is awake and then takes off outside.

At Devon’s place, Devon looks over some paperwork that Amanda had drawn up. He tells her this is exactly what he wanted. He seems bitter as he says he didn’t want to be forced to attack their parenting skills. He was just concerned and wanted to share custody. Amanda calls custody battles brutal.

He needs to be sure he wants to do what it takes to win, before she files the paperwork. He doesn’t want them to think it’s an attack. Amanda says that once this is through, they may not be friends anymore.

Devon hopes they’ll want to settle. Amanda says their hurt feelings could turn to anger and there could be a battle.

He wants to ensure they know they’re on the same team. Amanda says if the judge doesn’t rule in their favour, they may not allow him to see Dom. Devon doesn’t believe they’d do that. He has to do right by Dominic but wants to go through with it.

Rey finds Sharon at Crimson Lights. He flirts with her, as though they’ve only just met. She plays along and tells him she’s happily married. “But I’ll give you this to remember me by,” she says, leaning in for a kiss.

He has a proposition. Before he can ask, Tessa and Mariah turn up.

They order lattes as Rey looks on, unsmiling. The women get their drinks and talk about how happy they are. They missed Rey at Nick’s party.

He wishes he could have been there and heard it was a blast. They talk about how Nick was doted on and Rey looks away, obviously affected.

Mariah reveals they’re going to Fenmore’s, then Chance and Abby’s. They’ve a surprise planned. They go and Sharon sits. Chance appears and she says that duty calls.

She goes to get him hot cider and Chance tells Rey he’s not going back to the force. Rey’s sorry to hear that but he has his support. Everyone has spent more time with his son than him.

He goes into the other room and Rey asks Sharon on a date right now. She goes to wrap things up.

Chelsea and Adam arrive at Society. He doesn’t want to dwell on his issues. She says it’s overwhelming to consider packing up the penthouse. She talks about what she should keep and what she should donate until Adam says he knows she has something else on her mind.

Before she says a word, he lets her know that they’ll always be in each other’s lives “but there is no future between us.”

She counters that they’ve come back from other situations before. He made promises that they could rebuild what they had. She’d like to make those same promises to him.

He tells her he’s missing something. It always fell apart. It blew up this time. Does she want to do that again? She thinks he’s just scared.

She thinks it’s worth the risk but she’s not so sure. She asks, “Let’s try again.” He talks about their love being toxic. He’s tried to be gentle and doesn’t want to hurt her but she’s holding on to something that isn’t going to happen. If she can’t let go, they can’t work together. She asks if he’d let her go. He doesn’t want to but if their toxicity is a problem, he won’t hesitate. She calls it cold but he calls it compassionate.

He wants her to live a rich and full life. He tells her for the last time, they’re not getting back together. The sooner she realizes that, the better off she’ll be. Chelsea looks on, tears in her eyes.

Mariah and Tessa arrive at Abby’s with a gift. It’s been a year since she asked her to be a surrogate. Abby’s touched and opens it to find a little outfit for Dominic.

They let Abby know that they’re going to adopt. Abby’s thrilled and congratulates them. They share a group hug.

Dominic wakes up and Mariah says it’s bliss from here on out. Abby looks sad for a moment and asks if she’s spoken to Devon. She tells them about Devon’s shared custody request.

Mariah agrees to talk to him. Later, Devon and Amanda turn up. He wants to talk about Dominic but Abby asks to wait until her husband gets home. He agrees. She texts Chance to come home.

Chance sees Chelsea at Crimson Lights. They sit together and discuss what they’ve both been through. He’s glad she’s getting better. He’s surprised she’s in GC.

She says Adam wouldn’t have let her take their child far and he’s a good father. He asks how they are. She says they’re not in a good place. They’re not working things out.

She’s glad he’s alive and is sorry to bring him down. She asks after Dom and he has no photos to show her. She’s surprised. He guesses he’s let Abby handle that. They talk about parenting until Adam arrives. Chelsea says goodbye and goes to Rey for coffee while Chance lets Adam know what they were discussing.

Chelsea eavesdrops as Chance asks if Adam has any of that old love left for Chelsea. She turns away and goes when she hears Adam say, “I don’t. No.”

Adam head to his office and gets a drink, while Chelsea goes home and cries as she drinks and ends up throwing her glass into the fireplace.

At Society, Mariah’s distant when Tessa asks if she knows what she wants to eat. She asks her, “What about the old hiking boot with cheese on rye?” Mariah agrees to it and Tessa laughs. They discuss Dominic and Devon’s and the issues between Abby and Devon and the irony. She’ll reach out to Devon.

Back at Abby’s, Devon tells Chance and Abby that he didn’t want to take this step but believes he’s doing what’s best for Dom. He’s taking legal action to get shared custody. “You are taking us to court to spend more time with our son? How could you do this to us?” Abby lashes out.

Abby tells Devon that he doesn’t think they are capable of being good parents to Dom.

Devon says he’s concerned about Chance’s psychological state right now and how it might affect Dom.

Victoria talks to Adam. “Our father might not always have your back.” Adam says he hopes she doesn’t get too confident that he’ll always have hers or Ashland’s.

Tessa gets down on one knee and Mariah says, “Are you doing what I think you’re doing?”