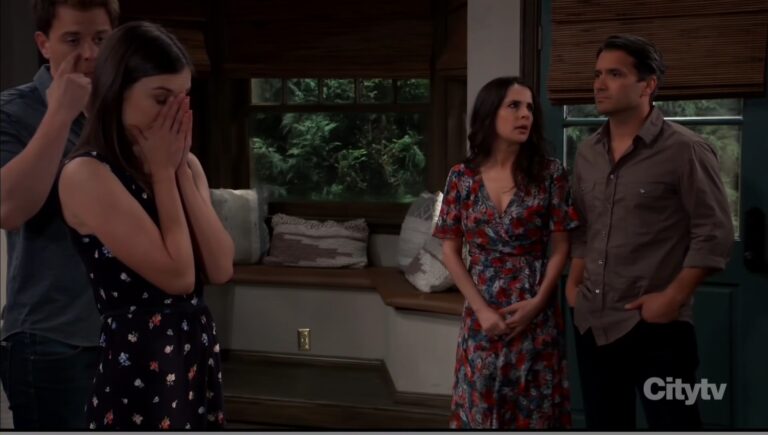 General Hospital recap for Friday, May 13, 2022. In today’s GH episode, Willow reacts to the news that Harmony couldn’t have been her mother, while Carly tells Joss about how horrid she thinks Nina is and Dante tries to talk to Michael about forgiving Sonny.

We also have Thursday’s GH recap where Felicia and Nina had a heart-to-heart.

At the spa, Carly asks if Trina’s allowed back in school. Joss says they don’t know yet. She says the hearing for Nina’s petition is tomorrow. Joss feels sorry for Willow. She doesn’t blame her mama for keeping it from Willow.

Carly remembers ranting to Drew about Nina being Willow’s mom. She thinks the truth can be a heavy weight to carry. Willow doesn’t deserve the burden.

Joss gets a notification about the article on Nina and starts ranting about how the judge should laugh Nina out of court. The feature makes a strong case against her. She thinks it’s karma for her ruining her marriage.

Carly says Sonny doesn’t get a free pass. Joss doesn’t understand how Sonny can say he loves her and then treated her that way. Carly can move past a broken heart. His kids thought he was dead for 9 months.

They can navigate through their grief but Avery and Donna were sad and confused… Nina could have put an end to it. Joss is sorry.

Willow reads the paper at home and thinks Smoltz did his job and then some. Michael thinks it’s best to use him to their advantage since the hearing is tomorrow. She agrees. Sam and Dante arrive.

The lab came back with her DNA results. They prove Harmony wasn’t her mother. Sam says she wasn’t told. She’s there because she figured Harmony could use a friend. They embrace and Sam invites her to the fair.

The nanny took Wiley to the Zoo so the women go on without the men. Dante takes a moment to encourage him to make up with Sonny. It only pisses Michael off and they rehash how Sonny betrayed Carly and himself.

Dante thinks there’s more to it and he says nobody’s perfect. “Not Sonny. Not me and believe it or not, not you.” Michael doesn’t care. “Dad made his choice.” Dante thinks he sounds just like him. Michael says it’s not enough for him to rise to the top.

He thinks Sonny has to fall. He’ll take every shred of legitimacy he has. Next time PCPD comes, he won’t have anywhere to hide.

At the Quartermaine manse, Olivia gets Leo ready for his poetry reading and Ned helps with his tie. Olivia says she’ll bring him to the fair a little early to get him used to the crowds. Ned has to meet her there because of ELQ business.

From the door, Brook Lynn eavesdrops. Ned says he’s not going to miss it but ELQ needs to be there when Leo’s of age. Brook Lynn appears and tells him Chase will be there.

He hugs her in thanks for letting him know and Olivia asks him to stop focusing on what can go wrong and cherish what’s going right. She and Leo go, leaving Ned to talk with Brook Lynn about ELQ.

He’s not happy she’s siding with Drew and Michael about the merger. He thinks that the guys would try to get her to sell the idea to him. She denies that. She thinks diluting Valentine’s shares is a genius idea.

This doesn’t help Ned’s mood. She asks him not to spoil Leo’s day and drags him off to the fair.

GH spoilers to May 20

Martin sits with Valentin at the bar. He’s reading the feature on Nina. He feels for her, but also, ELQ has called a board meeting. It’s time for Martin to earn his board retainer.

“What are we gonna do about it?” Martin blames him for being out of town, but Valentin couldn’t help that. He had an infection.

Martin says if that family remains a united front, he doesn’t stand a chance. Leo and Olivia come in for a donut. Valentin introduces himself to the boy again and Leo remembers him as being Bailey’s daddy.

Valentin shoots Martin a look and says yes. He tells the kid everyone likes donuts.

His favorite is cream filled. Leo goes off to get one. He and Olivia leave and Valentin’s angry that his ELQ shares are diluted, weakening him further. Unless he can bring someone over to his side. He wonders where this leaves Ned.

Jordan finds TJ at the hospital and asks how he’s doing. He’s been working out and taking care of himself. He talks about Marshall going missing. TJ wants to find him but his phone isn’t in service. She thinks it’s possible he doesn’t want to be found but TJ needs to hear that from him.

He hopes she’ll help him find his grandfather. He shows her the clarinet and the note from Marshall, and she says maybe he left something else that’ll help find him. He finds a receipt from a music shop in Brooklyn.

Jordan thinks the shop owner knows where he lives. He already has time off, so will go there. Jordan tells him to follow his heart.

Curtis arrives at Crimson to see Nina. He’s been reading the paper. He heads in and Nina’s on a call about skirt lengths. She disconnects and asks Shannon to hold her calls.

She races into Curtis’ arms. He’s there to be her shoulder to cry on. She claims she’s great but he knows she’s trying too hard. She admits it’s upsetting to her and she blames herself for it, knowing it can affect her case.

Curtis tells her to demand why someone with Sonny’s reputation has no restricted access. Nina’s jaw drops open. She won’t do it. Talk turns to Marshall and she asks what he plans to do about the man.

He knows that by looking for him will mean he’s opening up to more lies and deception. Nina gets it. She could do the easy thing and give Michael and Willow what they want but she can’t live without her grandchild. She asks if he can live without his dad.

Outside at the fair, Sonny is on a call. He leaves a message for Nina about the article when Drew pokes his head up. Sonny’s there for Avery’s dance performance. Drew says Scout’s got a watercolour painting at the fair.

He asks about the war between him and Michael. Sonny says his son is accusing him of being disloyal. Drew hopes they can resolve it and asks how he can help. He’ll try to broker peace. If Valentin reacts, he’ll deal with that.

Sonny won’t let him do it alone and says he wants in. He asks what’s going on with Valentin and how he can help. Drew refuses.

Sam and Willow turn up. They talk about Harmony and Willow wonders who her mama is. Sam thinks she should consider that it may not be good news when she does find out. Willow admits she may not be ready for that. When she is, Sam offers to help find her.

Ned and Brook Lynn turn up just as Leo’s getting restless. He asks for Chase.