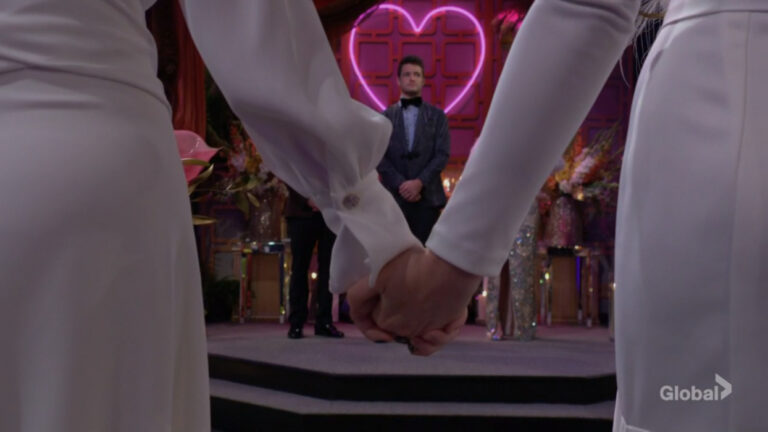 In this episode of CBS’ The Young and the Restless, Mariah and Tessa prepare for their wedding, Allie meets Noah, and Phyllis worries to Jack about what Diane is doing. In the previous episode, Sally manipulated Victoria, Nikki put Ashland on notice, and Crystal returned for the wedding.

At Sharon’s, she brings a mimosa to Mariah as she gets ready for the day. Faith tells her she’s the best sister anyone could ever have. They toast to her. Faith assures her she’s on top of everything and all she needs to do is relax.

Sharon takes off to take care of something, leaving her daughters to wonder about how she is coping. Faith thinks about calling Kevin over, but Sharon returns with something old, something new, something borrowed, and something blue on a silver platter.

“I guess this really is my wedding day,” says Mariah, tearing up.

The something old is a bracelet that belonged to Cassie. She slips it on her daughter. They’ve both been thinking about her.

The something new is a set of toe rings with the latitude and longitude of where Tessa and Mariah met inscribed on them.

The something borrowed is the handkerchief of Rey’s grandmother that he have her on their wedding day. Mariah says Rey is the reason Crystal is there. She’s one more person to love and witness their happiness.

The something blue is a stone that is supposed to have healing properties and has kept Faith calm in the challenging times. 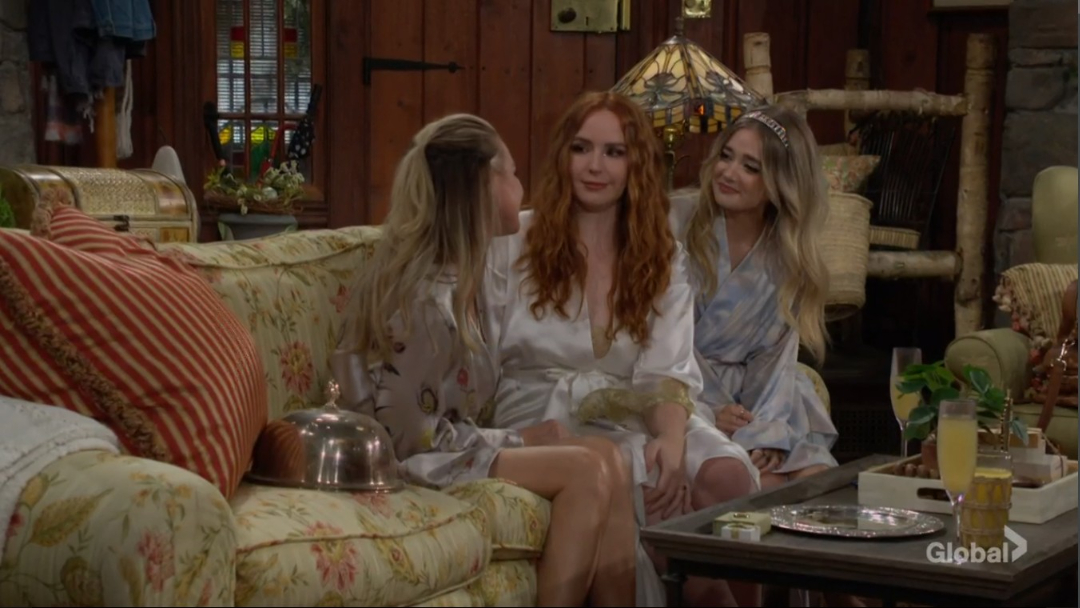 Mariah never thought she would be the girl to get any of this and now she is someone’s bride. She feels so lucky having them in her life. This is like a dream come true.

Faith checks the schedule. Mariah suggests she has a future as an events planner. She gets a text from Tessa telling her to look at the note she left in her bag.

She stares at the door. Crystal can’t believe she’s a famous singer/songwriter who gets clothes straight from the designer. She’s so proud of her for making her dreams come true.

Tessa gets a text from Mariah telling her to look in a box. It’s full of little hearts with things like “You’re the jelly to my donut” written on them. Crystal admires how cheesy this is.

Mariah and Tessa send texts back and forth about their first date as a married couple. Since Tessa’s dress hasn’t arrived, she threatens to show up to the ceremony in her robe.

Crystal brings her sister coffee and tells her how good for her heart it is to see the love she has found. Tessa explains that Mariah is more than love; she is her life and would do anything for her.

Tessa dresses her sister up in a glittering dress and then recalls the double proposals. They are thankful for Rey bringing them together again. Crystal reminds her not to cry and they have to leave.

Kevin and Chloe arrive with the dress.

In Crimson Lights, Noah prods his father for compliments for his wedding decor. Nick says it’s “transcendent.” He’s impressed his son is handling this so well given how he still feels about Tessa.

Noah assures him he’s moved past that. The feelings he was having were more about his break-up in London and he knew nothing would ever happen between them. Nick tells him love is rarely easy.

His son is not looking for love right now. He’s happier than he has been for a long time and wants to enjoy his life. Nick is proud of him. 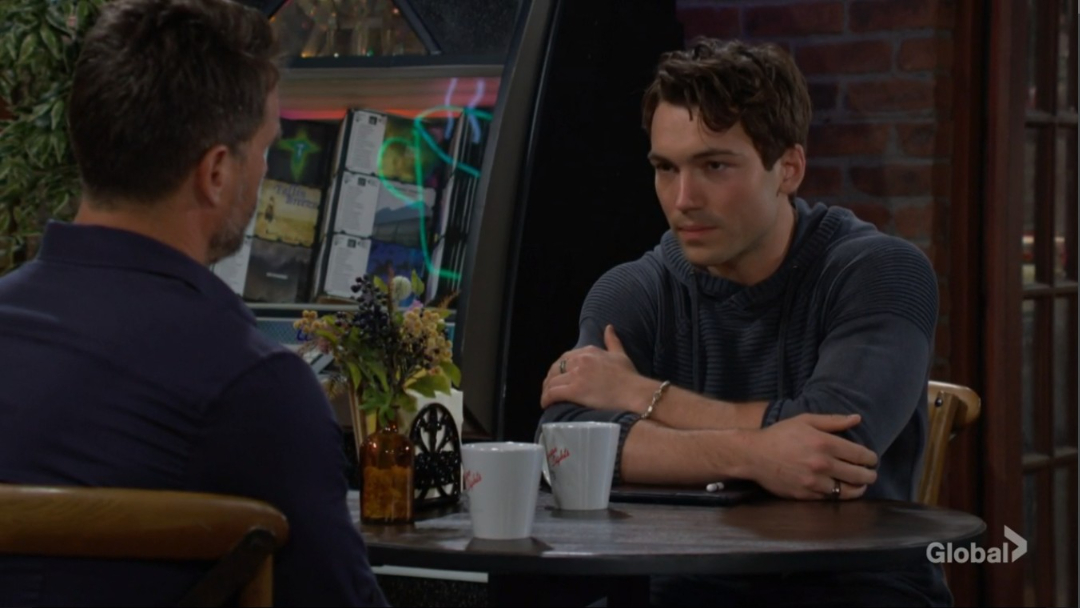 Noah knows walking Cassie’s twin down the aisle can’t be easy. His father admits that there’s not a day that goes by he doesn’t think of her. He’s trying to think of all the good things and is sure she is very happy her sister is getting an incredible day.

When Nick steps away, Abby comes in with Allie and introduces her to Noah. He starts making jokes about the Newmans and Abbotts but Allie is bewildered. Abby explains there is a lot of history between the families.

Chance wanders in and gets an introduction to Allie, who decides to walk back to the estate to see more of Genoa City.

Nick drops by Sharon’s and teases Faith with all his 70s lingo. She fusses over Moses and then her alarm rings. They have two minutes to get out of there. Mariah comes out and they remind her to breathe before leading her out.

At the Abbot estate, Jack helps Kyle with his cuff links as they talk about the wedding. Kyle is glad he let Mariah talk him into officiating it. Kyle is cramming his feelings about his mother into a little box so he can focus on the day.

At the Grand Phoenix, Phyllis corners Diane when she steps off the elevator and asks why she is still in town while the Newmans must want her buried. If she’s waiting for Kyle’s forgiveness, she’ll be waiting forever.

Diane repeats that she has changed and claims she is winning Jack over to her side. “You stay the hell away from Jack!” Phyllis warns. Diane smiles. The redhead accuses her of playing games.

At first, Diane thought Phyllis and Jack were a couple again but now doesn’t see how there could be anything romantic between them. Phyllis tells her she doesn’t have a chance with Jack.

“Hello ladies,” Jack says as he strolls in.

He thought Diane was going home and asks her not to read much into Kyle sticking around. It’s not an invitation for her to insinuate herself into his life.

After Diane walks off with a snort, Phyllis worries about what she’s up to. She has a very, very bad feeling. He assumes she’s worried about Summer but suggests they not worry about Diane.

He asks her to accompany him to the wedding. There’s nothing she’d like more.

Diane stops by the Abbott estate. Kyle is surprised to see her. She wanted to check on him since his plans to return to Italy fell through. He assures her he didn’t decide to stay because of her.

She’s impressed to hear he is officiating a wedding. She couldn’t be prouder of his new life. He pushes past her. 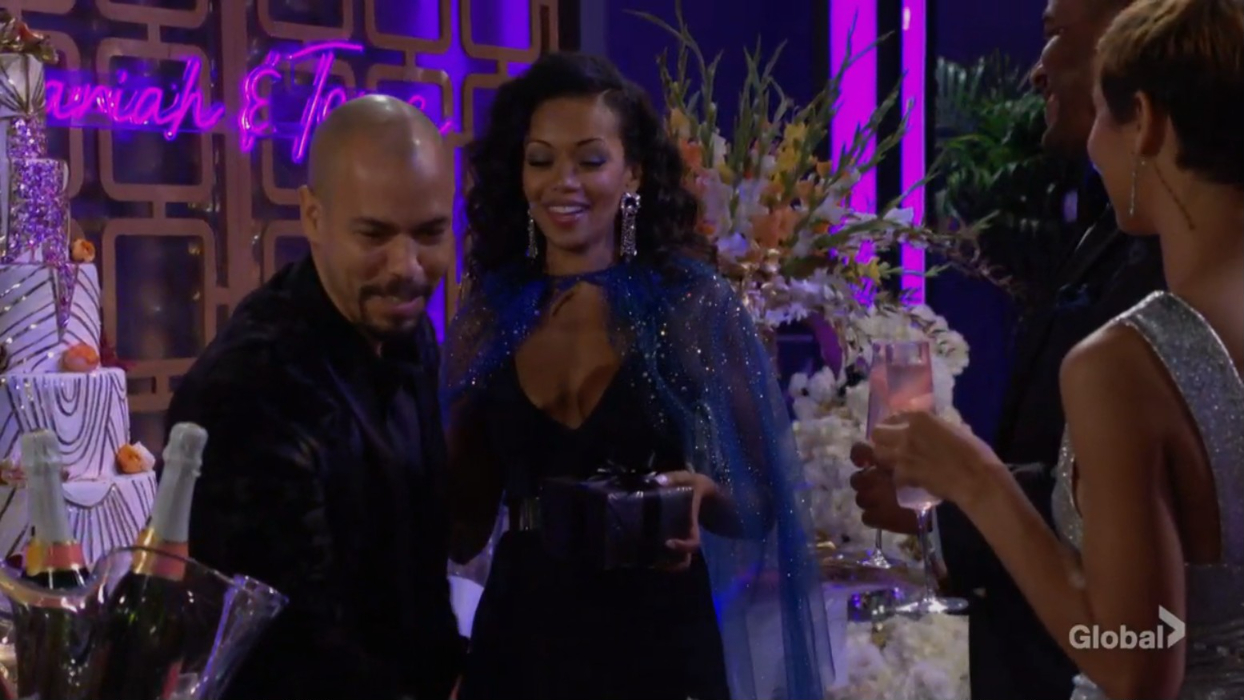 Everyone gathers at the wedding venue. Amanda is impressed by all the work Noah did. Devon thinks every wedding should be themed. 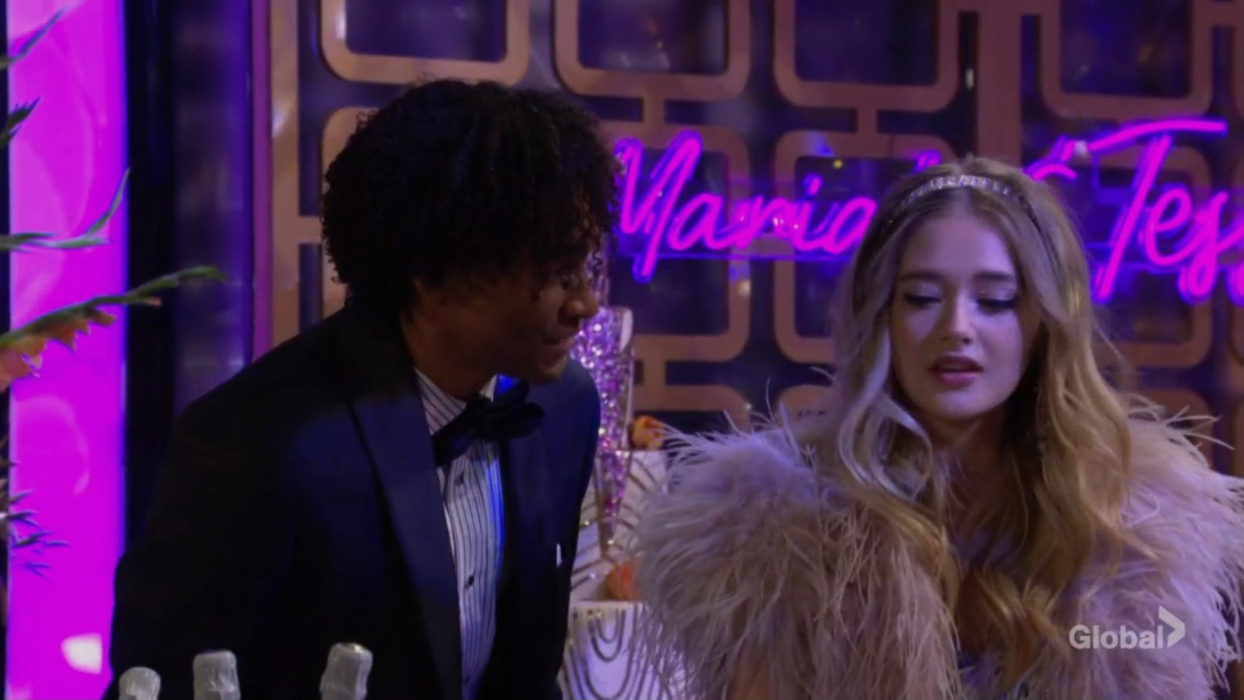 Moses and Faith arrive. She worries about where the brides are. He’s reassuring.

Abby can hardly believe that her nephew put all of this together. 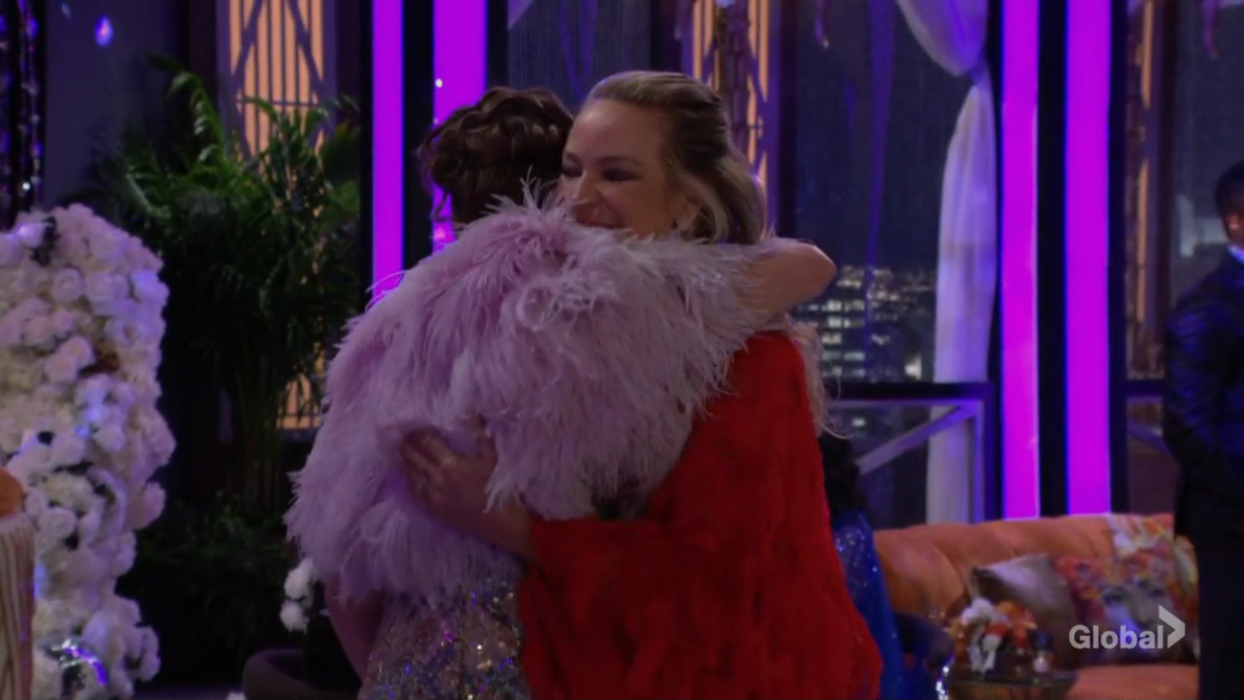 Sharon spots Crystal and rushes over to her. She instantly starts crying about Rey. Sharon says Mariah says this is Rey’s wedding gift. He is the reason they can all be so happy after so much heartache.

Kyle stops by to pay his condolences. She thanks him for changing his plans to help Mariah. He starts bragging and being the minister and putting Tessa and Mariah together.

Jack and Phyllis ask Kyle where Summer is. She hasn’t landed yet. He gets ready to officiate. Faith calls everyone together to help lift up the happy couple with the power of their love. 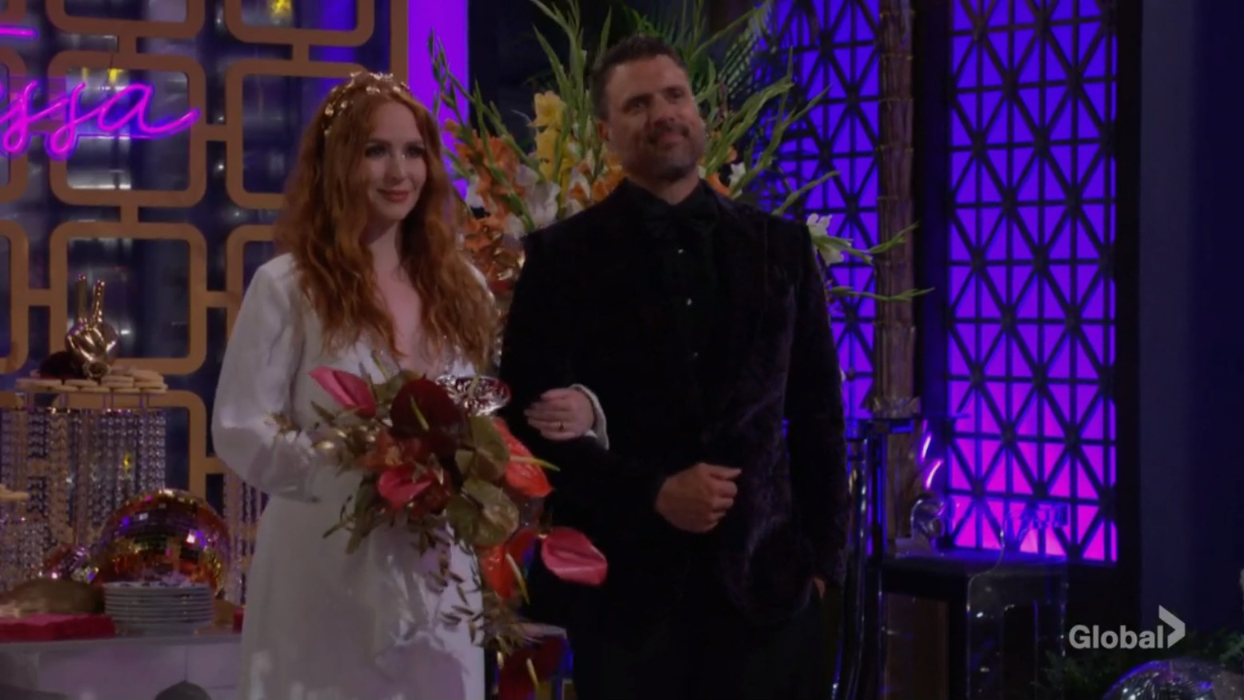 The two brides enter. Nick and Sharon walk them together. 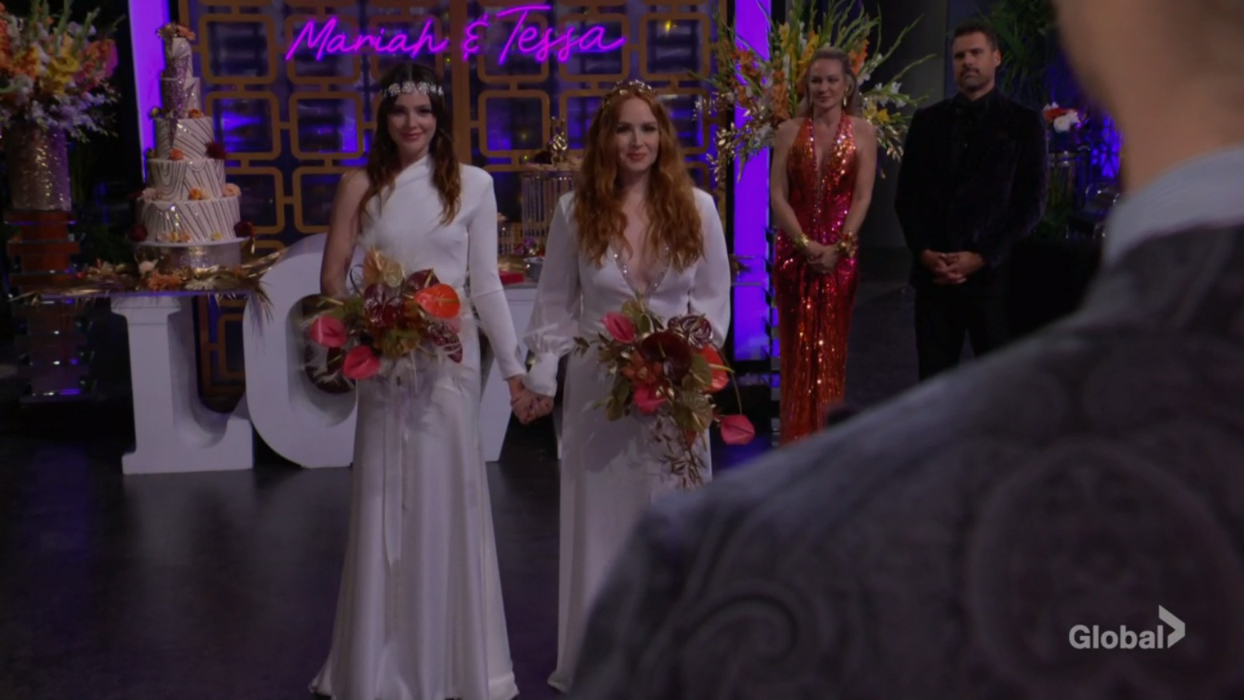 They admire each other’s dresses and join hands as they walk up to Kyle to begin the ceremony.

Tuesday’s day ahead Y&R recap: Tessa and Mariah are married and Diane crashes the wedding.