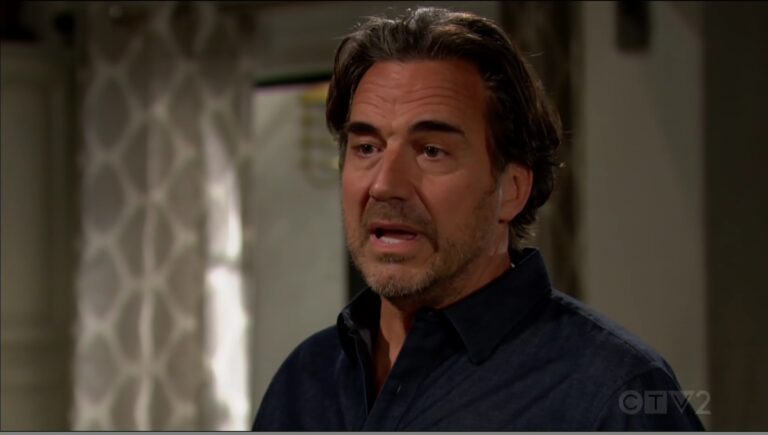 In the Friday, May 13, 2022, full episode recap of CBS’ Bold and the Beautiful, Hope and Brooke are startled by what Deacon tells them, Sheila continues to insist she’s changed, and Taylor and Ridge lay into her for being a killer.

We also have Thursday’s B&B recap where Sheila finally confessed to killing Finn after trying to convince Steffy she was delusional.

At Brooke’s, she tells Deacon that Sheila must have lost her mind if she thinks Taylor is going to let her into the family. Deacon says Taylor is a peacemaker and today could mark a whole new beginning for Sheila.

Hope wonders what else is going on here. Deacon explains that Sheila and Taylor formed a bond. Brooke bursts out laughing. He adds that Sheila saved the doctor’s life. The women are perplexed.

They mull over the tale of Taylor’s rescue from the side of a building. Brooke finds it hard to believe. Sheila seems more likely to take a life.

After pouring him a glass of water, Brooke asks Deacon what his relationship with Sheila really is. He says that people think ill of Sheila like they do of him.

For once, Sheila deserves sympathy. Brooke admits that, as a mother, she feels bad for her… but she won’t reach out to her and is sure Ridge will never allow her into his family.

Deacon isn’t defending the things Sheila did in the past. He can understand why Ridge hates her. He’s jealous of all the support that Brooke gives him, even if he is stating in close quarters with his ex.

At the cliff house, Taylor and Ridge accuse Sheila of sinking lower than they ever thought. Sheila insists that her killing Finn was an accident and it was really Steffy’s fault.

She may have pulled the trigger but Finn’s blood is on Steffy’s hands. Steffy’s parents won’t accept that. Taylor starts beating herself up for giving Sheila a chance to prove she can change.

Sheila insists she has changed and reminds Taylor she saved her life. The doctor thinks she’s the “same heartless bitch” she’s always been.

The whole time she was saving her, Steffy was struggling for her life thanks to the bullet Sheila put in her.

Ridge accuses her of killing her son in cold blood. Sheila insists it wasn’t like that and repeats this is Steffy’s fault. It’s all hazy and was unplanned. Ridge points out she tried to make it look like a robbery.

Sheila repeats she wasn’t thinking. Taylor accuses her of playing her like a fool when she knew all along that it’s her fault Hayes is fatherless.

After Ridge repeats that she’s sick, Sheila goes off on a tangent. She vaguely tells them how far above and beyond she’s gone to get Brooke out of their lives and reunite Ridge with Taylor.

When Steffy claims no one knows what she is talking about, Sheila reminds her of New Year’s Eve. Ridge needs some answers.

They go back to rehashing the shooting instead. Sheila eventually tells Taylor that she loves her and did what she did on New Year’s because of that. She just wanted to be part of their beautiful lives.

Everyone was slamming doors in her face but what Steffy did to her hurt the most. As cruel and heartless as she was to her, she would have forgiven her if she’d given her the slightest bit of compassion.

Steffy chose to defend Brooke over her. Sheila prompts her to tell her parents what they were arguing about the night of the shooting.

Steffy flashes back to confronting her about switching the champagne bottles and gasps. She tells her parents that Sheila sabotaged an alcoholic. Sheila admits she switched the labels.

Sheila reminds Steffy that she and Brooke threatened to keep her away from Finn and Hayes. She knows she has to deal with Steffy, but that was none of Brooke’s business.

Ridge thinks everything that happened was because of Sheila, but she insists she only got her to drink. Everything else was all Brooke. She was just trying to be helpful. They just need to ask Thomas to confirm that.

His parents refuse to believe he would keep this from them. Steffy admits it’s true. Ridge asks Sheila how she could play with people’s lives like this.

“You don’t deserve to live,” he tells her. He promises to make her suffer every chance he gets.

Steffy tells her there is a special place in hell for her after she spends the rest of her life behind bars. Her reign of terror ends today.