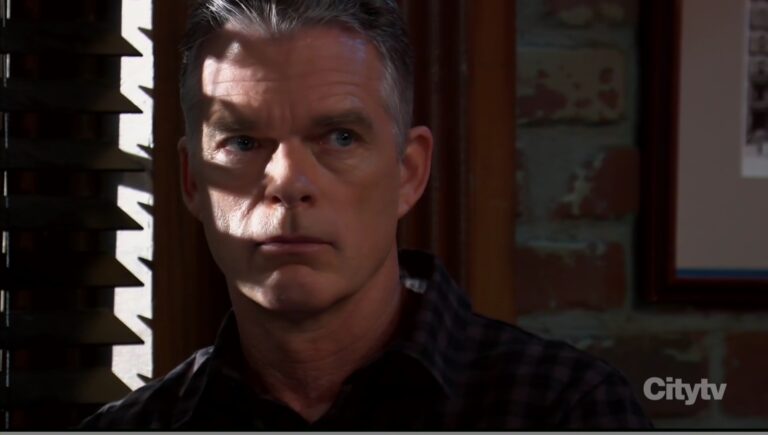 General Hospital recap for Thursday, March 31, 2022. In today’s GH episode, Joss and Cam want to support their friend, Spencer surprises Esme with his suggestion, and Nina has a fight with Carly.

We also have Wednesday’s GH recap where Sonny grilled Esme after having her abducted, and Victor threatened Sonny.

At the court house, Scott explains to Trina and her family what will happen during the arraignment.

Curtis bumps into Molly in the hall. She’s working under ADA Harding and worries this could be awkward. She had no idea that Trina could be involved in something like this. Curtis is sure justice will prevail.

Molly and the Harding head into the court room. Scott is disappointed to see that Molly is not handling this case on her own. The ADA explains they have a deal to offer, but it requires her pleading guilty.

Scott tells them to shove it. Molly reminds Trina she could go to jail and Harding tells them the offer won’t be on the table for long. Portia doesn’t think her daughter should plead guilty when she is innocent. Scott says it is Trina’s call.

They mull this over. Curtis says she might just go to a medium security prison. Scott explains the various outcomes that are possible and the way prosecutors construct deals.

He can almost guarantee that the jury will bring back a not guilty. Curtis urges her to think about what outcome she can live with.

Trina needs a moment along and gets permission to take a walk after thanking her mom for her support. Portia doesn’t understand how all this has happened.

Curtis assures her everything will be fine and they have this.

Harmony drops by The Invader office to see Alexis. She didn’t want to leave things as they were this morning. Harmony tells her how sorry she is for what she did to Kristina. She offers to move out.

Alexis knows she has a difficult past and agrees to let her stay until she can afford to move out. Alexis says the article on Joss and Cam is doing well and has been picked up by the national press.

She feels like she’s got her “gloop” back now that she’s in her second act after falling off the wagon. Harmony flashes back to killing Neil and then tells her friend she has decided to help Nina with the Wiley situation.

Alexis doesn’t think that is smart but doubts it will tank her relationship with Willow. Harmony is happy that she has her life back on track. Alexis says it feels good.

Cam drops by the Corinthos kitchen. He and Joss discuss the article. They feel like they have been living under a microscope. Journalists have been hounding them. He still thinks this was a bad idea.

She vents about how messed up it’s been. He tells her a girl on campus came up to him and said she admired what they did. He’s not huge on the attention but thinks they may have made the right decision.

Joss suggests they just ignore the negative and things will get easier. They’ve taken a lot of control and won’t let this define them. They are sure that Esme planted the evidence on Trina.

Joss has to give Esme some credit but wants to kill her. They remember the arraignment is today and decide to go and show Trina their support.

When they get to the courthouse, they find Trina walking the hall and give her a hug. The three of them discuss the plea offer and Joss urges her not to take it. They promise to be there for her no matter what she decides.

Trina is called back into court. Judge Young enters and asks how the defendant pleads to cybersexual harassment.

Michael and Willow meet with Diane at the Metro Court. Diane tells them that Nina will try to portray herself as more stable than Michael, given that he has a tendency to punch lawyers. But she has a plan to make this all go away.

Diane suggests he make Smoltz an offer to feed information to him. Michael agrees to that. After she leaves, he apologizes to Willow for jeopardizing their ability to block Wiley. She says he doesn’t have to.

They start complimenting each other until she yawns. He thinks she needs some food. They kiss until Harmony joins them. He thanks her for helping Willow at the hospital the other night.

The three of them discuss the situation with Nina. They all hate the fighting and worry about how Wiley may be picking up on it.

Harmony suggests they grant informal visitation to Nina to avoid all the fighting. The couple assumes Nina talked her into this.

Harmony insists her loyalty is to them, but Nina convinced her that settling this among themselves would be for the best. Michael and Willow tell her they’ve considered all the angles.

Willow had compassion for Nina once too, but not anymore.

Things are awkward when Maxie and Nina arrive at the yoga studio and see Sam and Carly there. Nina refuses to leave. She tells Maxie that she may have someone else helping her with the Wiley issue: Harmony.

That doesn’t sound great to Maxie. It seems risky but Nina doesn’t think she has many options if she wants to avoid the legal route.

Carly complains about constantly running into Nina. She refuses to let her run her out of there. They discuss the article and how proud they are of Joss and Cam’s bravery. But it is shining a bigger spotlight on the kids. Sam is sure Joss will be okay.

Sam worries about the future Scout will have. She will be a happy mom if she can be half as tough as Joss.

As Carly and Sam get their water bottles, Nina tells her she’s sorry to hear about the Joss situation. Carly sneers. Nina tells Maxie she wants to try to get Carly on side about Wiley. Maxie thinks she will make things worse.

Ignoring this, Nina gets up and asks Carly if they can discuss Wiley. This doesn’t go over well. After listing Nina’s many missteps, Carly orders her to leave her and her family alone.

Nina refuses to let anyone keep her out of her grandson’s life. “You did this to yourself,” Carly snipes, accusing her of using Wiley to stay connected to her dead daughter and not caring about how it affects him.

Nina and Maxie walk out. Carly tells Sam how much she hates Nina. Sam urges her to breathe and relax.

Diane shows up at The Invader and asks Alexis if there is something they can dangle in front of Smoltz to get him to drop his case against Michael.

The editor says he hates her and won’t be convinced by anything she offers. Diane says she’s right not to deal with Smoltz. She’ll just have to figure out something else.

At Charlie’s, Spencer assures Esme that he does not condone his uncle Sonny’s actions. Nikolas isn’t surprised that Sonny went after her given what happened. Esme insists she is innocent.

Spencer explains he went to see Trina. This makes Esme livid and she leaps up. Trying to calm her, he tells her that he told her he believes her.

Nikolas suggests they discuss this later. Esme is sure Spence will always think the worst of her and walks away, feeling sick.

Nikolas suggests he be gentler with her since she might be pregnant. His son says he’s trusted her over everyone else for a long time and doesn’t know why he didn’t this time. Nikolas says he’s obviously developed feelings for Trina.

He’s sure his son is going through complicated stuff. Spencer points out they don’t even know if she’s pregnant. His father urges him to find a way to navigate this.

When Esme returns, she says she feels bad and is going back to Kelly’s. She worries that Sonny will come after her again. Spencer asks his father if he and Esme can move into Wyndemere to figure things out.

The prince is happy to share his home and is sure this is what’s best for them.

A few tables over, a man has been eavesdropping as he reads The Invader.

The man goes to The Invader office to see Alexis. “Been a long time Miss Davis,” he says. “It’s you,” she notices.