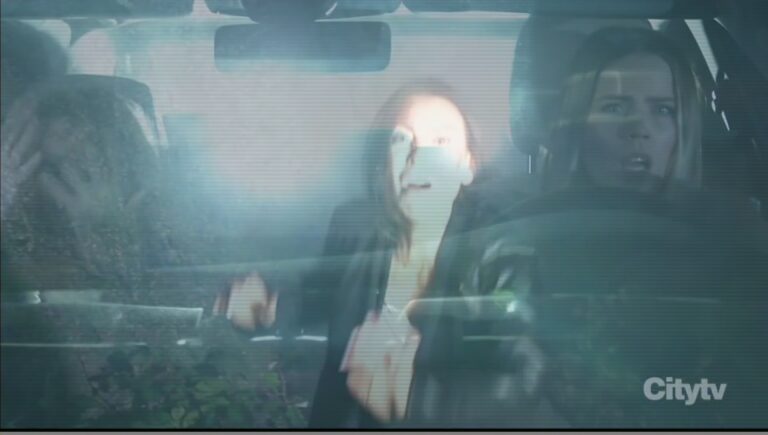 General Hospital recap for Wednesday, April 27, 2022. In today’s GH episode, Curtis and Sonny discuss Marshall, Dante interrogates one of the men Sonny threatened, and Nina worried to Brando about Sasha.

We also have Tuesday’s GH recap where Harmony confessed to two murders while Carly woke up in her trunk.

Finn chases Violet into the salon, Martha and Chloe. She thinks he should get his nails done too. “First time for everything,” Ava says as she spots them. Violet walks over and admires her nails.

Finn agrees to let his daughter have whatever design she wants. She goes off with the manicurist and Ava tells the doctor how precious time with your little girl is. Ava can tell he is a good dad.

He tells her he tries. He wants to protect her every single moment. She knows how he feels and almost left the country last year to protect Avery. Violet reminds him he needs to get a manicure too. He has his nails done in lavender.

Sonny wanders into the gym and finds Curtis aggressively working the bag. “Whoever it is, you must really hate them,” he comments. Dante gets a text from work and has to take off. Nina calls Brando and tells him Sasha seems fragile. He heads out too.

Sonny and Curtis talk about his arrangement with Miss Wu. Corinthos muses that life is a gamble and nothing is riskier than family. Curtis wonders why he is so interested in his father.

Sonny says that Marshall intrigues him. Curtis says his father has no use for people like him and wonders why he refused to look into his past. Corinthos recalls seeing his meds and then tells Curtis that the past should be left where it belongs.

Sonny assures him he isn’t looking to muscle in on his club and hopes thinks work out with his dad. Curtis says it might be too late for the latter.

Corinthos knows how much trouble there can be between fathers and sons. If he thinks they can repair things, he shouldn’t give up.

Drew bumps into Portia at The Savoy. They haven’t been able to get in touch with Curtis and assume it has something to do with Marshall leaving town.

She assumes something serious is going on and he knows more than he’s telling her.

Drew explains that he helped drive Marshall away by running a background check on him. Curtis might have discovered something else. He was just trying to make sure everyone was safe.

Portia wishes that Curtis would have let her help get answers. He cautions that the less she knows, the better.

Curtis wanders in and apologizes if he upset them by disappearing. Drew give him a hug and takes off. Sitting down, Curtis tells Portia they need to talk.

Sasha keeps her distance on the patio as she spots the Deception crew toasting to their success. Gladys complains about only getting a bonus. She spots Sasha and motions her over.

Once the model joins them, they have more toasts. Lucy explains she is on the trail of the perfect house for Brando and Sasha. As they discuss what to do with their millions of dollars, a man spies on them and calls someone.

Maxie and Brook Lynn step out. She asks Maxie if Austin is ghosting her because she’s now a millionaire. Maxie insists that the doctor doesn’t care about money and reminds her she was supposed to give Austin a chance.

The doctor appears and tells Maxie how amazing she looks. He senses some tension from the Quartermaine.

Back at the table, Lucy tells Sasha about all the work she needs to go. A paparazzo starts snapping pictures of her. Maxie, Brook Lynn, and Austin rush in following the yelling. The photographer stops and Sasha runs out.

The paparazzo follows and catches Sasha fumbling with drugs. He grabs a pill off the ground as she picks them up. He chases her back to the patio. Gladys grabs his camera and Austin backs him off.

Lucy reminds the reporter that Carly owns the place and threatens to get in touch with Sonny. After Gladys has left with Sasha, the paparazzo gets his camera back and notices that his memory card is gone and chases after Gladys.

Brook Lynn tells Austin that all the money in the world doesn’t buy happiness.

He reminds Maxie that they are due for the tasting menu on the terrace and they stroll off.

As Sasha and Gladys drive, the paparazzo chases after them.

GH spoilers to May 6

Dante arrives at General Hospital to see a patient. TJ shows him in to the battered man. The cop knows Eric from way back and asks where his partner is. Eric isn’t talking. Dante asks who did this.

Eric flashes back to Sonny laughing at him in the trunk. He says nothing. When he leaves his patient alone, TJ gets a package. Opening it, he discovers a note from Marshall and a clarinet.

Dante returns to the gym and tells Sonny that he just interviewed one of the men who tried to rob Charlie’s. He’s in bad shape, his partner has vanished, and he has no memory.

Sonny says some people are just meant for trouble. Dante is sure he was sending a message to someone by beating them up. He hopes this is the end of it and there’s no repercussions. “It’s a dangerous world,” Sonny muses.

Brando stops by Nina’s place. She thanks him for helping that night with the robbers. He reminds her she called him over because of Sasha. She explains that Sasha was very frightened by what he did that night. After losing Liam, she is terrified of losing him too.

He insists that Sasha doesn’t need to worry about him taking stupid risks. He just fixes cars now. She knows but his wife is afraid to invest in her own happiness because she’s afraid it could be snatched away. Losing a child leaves you with an emptiness that never goes away.

Brando tells her that Sasha still regrets what she did to her. Nina thinks Sasha needs to focus on herself, her marriage, and her career. “It doesn’t take the place of Liam,” he says.

His mom worries that Sasha is trying to cover up her pain. Nina says it could be taking a toll no one is aware of. She’d like to help Sasha through this. Together they can make sure she knows she’s not alone.

On the cliffs, Harmony tells Alexis that she didn’t want things to end this way, but she’ll kill whoever is necessary to keep up the lie that Willow is her daughter.

She fights with Alexis and insists that none of this was her fault.

Harmony picks up a rock and is about to clobber Alexis when Carly leaps up and pushes her down. She holds Harmony back as Alexis calls the police.

Pretty soon, Rory arrives and interviews them. They tell him what happened and urge him to chase after Harmony before she makes it to the highway.

Harmony stumbles through the woods looking at pictures of Wiley and Willow on her phone, vowing not to lose them. “I have to get to you before they turn you against me,” she says. 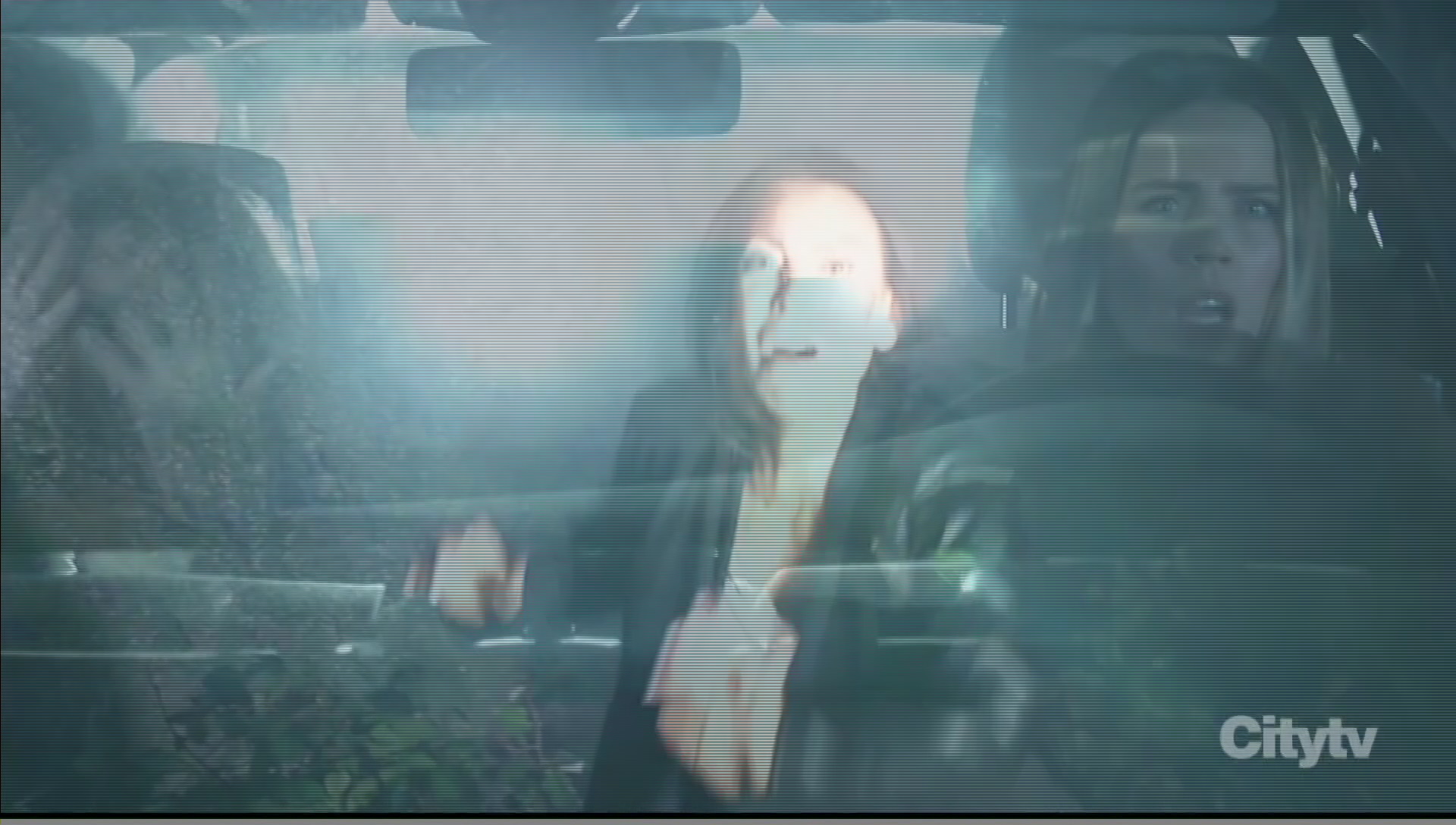 As she heads for the highway, Sasha and Gladys run her down.