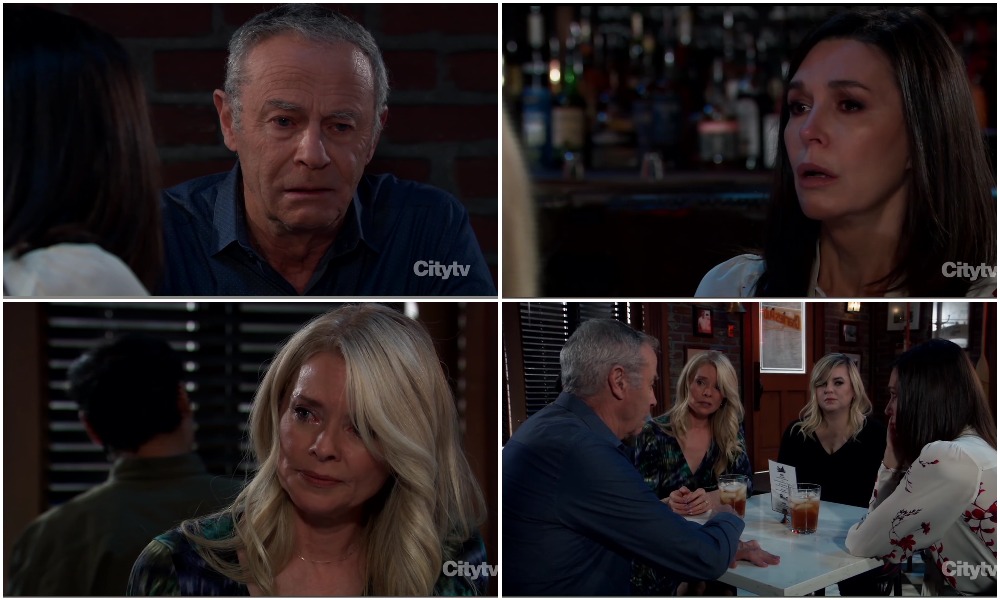 SoapsSpoilers’ General Hospital recap for the Wednesday, January 5, 2022 episode. Today, Valentin agrees to work with Victor against Brook Lynn, Tracy realizes who Bailey really is and Robert is beside himself with news that Luke is dead. We also have Tuesday’s GH recap where Luke’s family learned he died, Ned and Olivia reunited, and Portia and Curtis professed their love.

At the Quartermaine house, Michael tells Willow that he’s worried about his mom. She’s sorry and wishes she never overheard Sonny and Nina. Michael assures her nobody blames her. Harmony shows up with a Christmas present and Wiley opens it. It’s a toy train. He says goodbye to Harmony by giving her a drawing and then takes the toy out with Michael to show Leo. Harmony heard the charges were dropped against Nina.

Willow admits Michael’s angry about it and says some things came out that Michael thinks Nina purposefully withheld. Nina seemed genuinely upset, though. Michael returns and they admit they were discussing Nina. Harmony thinks Michael should trust her kid’s instincts. Michael asks how this is any of her business. Harmony apologizes. She’s changed a lot and wants a relationship with her family. He hopes that’s true.

Elsewhere, Tracy demands Brook Lynn tell her where she got the baby from. She knows she wasn’t pregnant. Brook Lynn lies that she found a mother and helped her out for shares in ELQ. Tracy can’t believe she’s trying to pass off “Detective Chase “as the father. Why not just tell the truth?

“Do not tell me you were stupid enough to steal a baby?” She says. Brook Lynn promises she’s not but the rest is none of her business. Tracy begs to differ. Why not say she had a one-nighter? Brook Lynn says Chase decided to lie for her. Tracy assumes they’re together but Brook Lynn denies it.

At Charlie’s Place, Anna and Felicia talk about how Maxie seems reluctant to find Louise. They wonder how much longer she can go on not knowing if her daughter is okay. Anna holds her hand and comforts her.

Maxie visits the hospital to ask Austin and Britt when Peter’s going back to prison. He’s escaped once and she can’t deal with that again. Martin shows up and is told where to find Peter’s room. This upsets Maxie, though she doesn’t think he’d take his case. Martin goes to see Peter and asks what he can do for him. Peter wants to hire him as his lawyer to prove he didn’t kill Franco Baldwin. He’ll only do it for generous compensation.

He wants a $50K retainer. “Done,” Peter says. Martin will only work on that. The other allegations against him is some other lawyer’s problem, but even if he’s exonerated, there’s “an avalanche of other charges against him.” Peter knows. “One battle at a time,” he says.

Martin leaves and Maxie stops him to ask if he’s going to take “that monster’s case.” Martin says he is. She tears up. “No.” He lets her know it’s business and takes  off. Maxie leaves and Austin stops Britt from going into Peter’s room. He asks why she wants to go in there.

She saw him on Cassadine Island where he killed Jason, which is why she needs to see him. Austin calls it a bad look if the co-Chief of Staff is arrested for murder. She asks the guard to get her in to monitor him. “Well hey there, Sis,” Peter says. Britt tells him not to call her that. They’re not family.

She reminds him of what he’s done. He insists the cave was not his fault. If there was no shoot out, there would be no cave in, she states. She’s glad they didn’t grow up together. All he does is bring pain and suffering to everyone. She taunts him, wondering if Louise is somewhere crying, if she’s even still alive. Peter is uncomfortable and tells her not to say that.

Britt despises him. She tells him if she poisoned, him, she would have gotten the dosage right. She doesn’t want him dead. She wants him imprisoned. She leaves and Austin asks if she feels better. She does. She laughs.

She knew her words hurt him and it felt good seeing him in pain. They talk about Liesl’s Christmas present which was to sign her up for a dating service. Austin thinks she should get back out there. He volunteers as her wing man.

At Metro Court, Victor asks if Charlotte had a good Christmas. Valentin says nothing. Victor claims he’s sorry that Valentin’s not Bailey’s father. Valentin refuses to let him near Charlotte. Victor understands. He assumes Valentin will retaliate against Brook Lynn.

He offers to show her that nobody crosses a Cassadine. Martin turns up. Valentin has a meeting with him so Victor says to think about his offer. He goes and Martin admits he’s representing Peter August. Valentin doesn’t like it. Martin has bills to pay. Valentin cancels the meeting and takes off. He sees Victor in the elevator. Victor again wants to work together against Brook Lynn for disrespecting the Cassadine name. He wants a relationship with his son. Valentin asks, “What do you have in mind?”

At Alexis’ place, Shawn tries to talk, Alexis into working at The Invader with him as second in command. Sam turns up. They tell her what’s happening and she likes the idea, though Alexis thinks it’s crazy. Shawn needs someone to fight for what’s right. “I need a warrior,” he says. Alexis grins. Shawn goes and Sami tries to convince her mother she can do this. Alexis calls Shawn to tell him she’s in.

Maxie arrives at Charlie’s Place and complains to her mom and Anna that Martin took Peter’s case. The women tell her that it’s time to bring home Louise. Robert turns up with bad news. He tells them about the tragic cable car accident in Austria.

Luke was on the car and according to Tracy, “Luke’s gone.” Maxie’s sorry. She knows how important Luke was to all of them. Robert says he was his best friend. Maxie goes to stop by to see Tracy. Felicia cries as she heads out with her daughter. Anna holds Robert’s hand. “First Holly, and now Luke,” she says. She’s glad he’s there. They’ll miss Luke.

Inside, Felicia cries about how Maxie’s baby has been gone missing for 7 months. Tracy looks at the door and considers that Brook Lynn got her baby around that time. The wheels turn. The women bring the baby back and Felicia fawns over her as Tracy stares at Brook Lynn. Everyone leaves and Tracy cares for the child. She thinks she’s had an interesting life so far. “Or should I call you Louise?!” She grins.