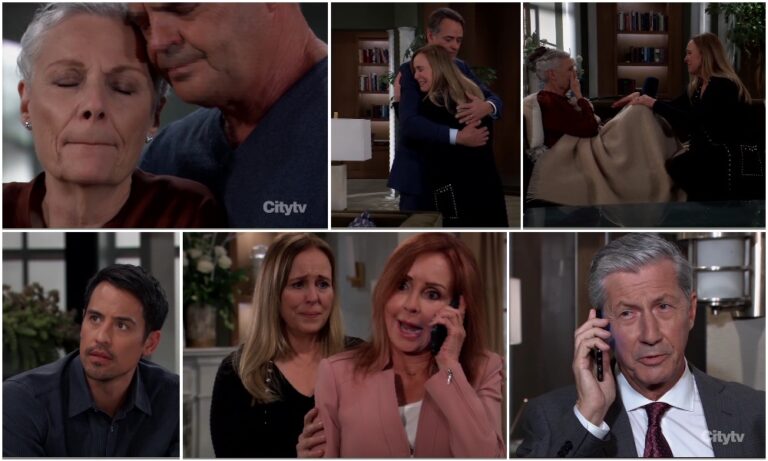 SoapsSpoilers’ General Hospital recap for the Tuesday, January 4, 2022 episode. Today, Luke’s family learn of his death, Victor reveals he killed Luke, Ned and Olivia officially reunite, and Portia and Curtis admit they are falling in love. We also have Monday’s GH recap where Tracy told Laura Luke is dead and Peter woke up to strike a deal with Victor.

Curtis wakes Portia up in bed with a kiss and wishes her a happy new year. He doesn’t need to go to the club today and she is off all day. There’s no good reason for either of them to leave the bed any time soon.

After they have sex, she admits she was wondering if this would feel the same after twenty years. It feels better to her. It feels right. “Because it is,” he agrees. They made mistakes last time. She wouldn’t change a thing about what happened. It surprises him that she has no regrets. She’s sorry for the pain she cause but she’s learned from the past. The mistakes they made led them to where they are today.

Curtis thanks her for pushing him in a new direction in his life. She means everything to him. He has the same importance for her. Portia admits that she’s starting to feel nervous.”I am falling in love with you,” he tells her, not expecting her to say it back. She does anyway and they kiss. The doctor asks him to leave the past where it belongs and focus on their new life.

At the Quartermaine estate, Leo talks to Brook Lynn about burping babies until Ned and Olivia come in and he runs off. Olivia talks about how strong they now are as a family. They have started the ball rolling on Ned adopting Leo officially. Leo returns and starts spouting octopus facts before leaving with Brook Lynn to look at one of his books.

As Olivia puts the baby down, Ned tells her they still have an outstanding issue to settle: them. They sit down and she explains that his infidelity ripped her heart to shreds. He promises that it will never happen again. Olivia has forgiven him. It was a symptom of a bigger problem in their relationship. They had lost faith in each other. But over the past few months, they have learned to see each other as partners again. He’s the man she wants to spend the rest of her life with. They kiss. Ned wants to tell everyone they are back together. His wife tells him how important it is that they be honest with each other.

Monica greets Drew when he arrives at the front door. She wonders if he’s reunited with Sam. He assures her they are only co-parents. Monica is tired after being up all night with Ned and Olivia. Now that Drew is settled in, she says there is ELQ business he should address. He has some other things on his plate to deal with first, namely Peter. Drew has questions about his conditioning and only Peter can answer them. She begs him to be careful. Peter has already taken one son from her.

When Nikolas and Ava arrive at the Metro Court, he spots his uncle in the lobby and wonders if they should take off. She reminds him Victor has something over him and suggests they be nice. When they join Victor, he’s sure to show them an Invader article about a crisis in the Cassadine industries. Nikolas is outraged by how it makes him look. Shawn wanders in and rubs it in his face, explaining that the non-profit Nikolas financed for him bought the paper. “This is all possible because of you,” he says before strolling off.

Victor says Shawn is becoming a nuisance and offers to “handle the situation.” Nikolas and Ava aren’t eager to do that. Victor tells them that times are changing and they need to be ready. Nikolas needs an explanation for this but one isn’t forthcoming. Kevin interrupts and informs them that Luke is dead.

They sit down and discuss spreading the news to the family. Ethan will be hard to contact. Victor pays his condolences and comments on what a shame it is is that someone larger than life like Luke had to die in “such a trivial way.”

When left alone, Victor gets a call from a blocked number. Stepping somewhere quiet, he makes a call, ordering a halt to the hit on Laura since Luke has been neutralized. “Now it’s time for phase two,” he says.

When Valentin drops by General Hospital, Bobbie bars his way to Peter’s room. She’d like to rough August up herself but she has to keep him alive. Valentin didn’t come to kill him and is surprised to hear Victor visited Peter already. Bobbie gets a text from Laura as Alexis arrives. She tells Valentin to behave and takes off.

Valentin notices that Alexis seems lighter than usual. She admits she just came from a meeting after nearly falling off the wagon last night. Alexis has been directionless but a friend reminded her that her answers at the bottom of a bottle.

After she leaves, Drew shows up. Valentin warns him of how treacherous Peter is and urges him not to give him any leverage. Drew asks about what’s been happening at ELQ. Valentin breaks the news that he controls his voting stock.

At home, Laura wakes Tracy from a nightmare as she sleeps on the couch. “I can’t believe he’s gone. Luke’s gone,” Tracy says, sobbing. Kevin brings in coffee. She sips it and says it’s terrible. Tracy hasn’t slept in two days. Laura managed to reach Lucky and tell him about the cable car crash in Austria. Tracy explains the authorities brought her Luke’s personal effects and identified his remains. She blames herself for his death.

Kevin assures her it’s not her fault. Tracy says she and Luke fought after he decided to get involved in some scam. She said terrible things to him before he left. Unable to face Bobbie with the news, she leaves. Laura wishes she could do more to help but she’s sure that Tracy can survive. She falls into Kevin’s arms in tears. He tells her not to hold in her grief on his account. Luke was a pivotal part of her life.

Just the other day, Laura realized it was forty years ago that she married Luke. That chapter of her life has been over for a long time. But how will she tell Lulu when she wakes up? Bobbie arrives and Kevin leaves the women alone. Bobbie guesses something terrible has happened.

Sitting her down, Laura starts to explain what happened. Bobbie instantly realizes and turns away. She tries calling her brother and leaves a message, ordering him to call her immediately. “He’s not going to call,” Laura says. She doesn’t want to believe it either but it’s true. Bobbie breaks into tears in her arms. Laura reminds her of how much he loved her. None of this makes sense. Bobbie is sure that this was no accident. “Someone killed Luke,” she says. The mayor insists it was a senseless accident.

Tracy shocks her family when she arrives at the Quartermaine house, still visibly shaken. She tells them about losing Luke. Pouring a drink, she explains how much she wanted to get back home. Although she and Luke always used to battle, the last time they got together, she was sure they would be together until the end. “Joke’s on me. We had no idea how early the end would come,” she says.

Left alone with Brook Lynn, Tracy promptly confronts her about still pretending the baby is hers.

When Alexis heads home, Shawn happily shows her the new edition of The Invader. He tells her that he needs someone to work for him as an editor. She’s the person he has in mind for the job.