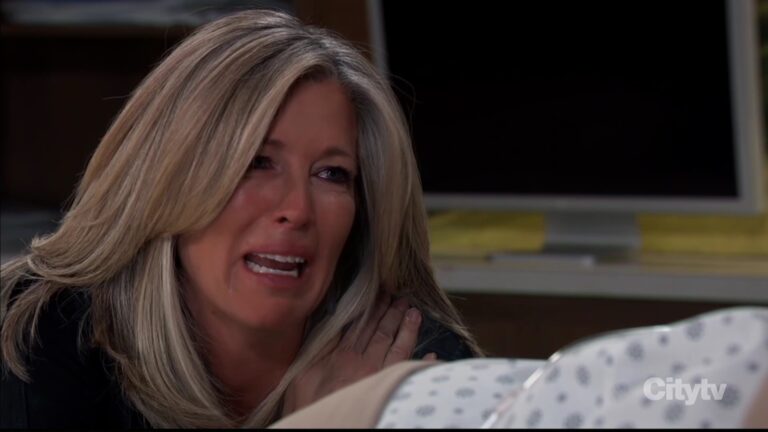 General Hospital recap for Wednesday, January 18, 2023. In today’s GH episode, Carly begs for forgiveness, Michael refuses to forgive Carly, Nina’s gung ho to get tested, and Anna and Valentin meet with his contact.

We also have Tuesday’s GH recap where Sonny tries to convince Nina to be optimistic, Martin threatens to let Esme go to prison, and Anna and Valentin get more information about Lucy.

In Paris, Valentin and Anna and make out on the sofa when their contact arrives.

The tall, willowy blonde swoops in and sees Valentin. “Mon amour,” she says, giving him a lingering kiss.

Anna lifts her gun, not happy with what she’s seeing.

She was expecting a rat. Valentin insists he didn’t call her a sewer rat.

She clutches Valentin’s arm as she reminds him of their past in the catacombs and their nights together.

They tell her they want access to the compound to extract the prisoner and make a getaway.

Renee says she can help. She’d do anything for Valentin. She takes off to make arrangements, kissing his cheeks, and leaving lipstick behind.

Once she’s gone, Anna cleans it off. He promises nothing is going on between them. She knows. Not now. There’s no time to find anyone else. He asks how she wants to play this.

Outside, Renee meets some guy and asks if he still works for Victor Cassadine. “Who?” He asks. She wants to know if he wants intel.

Renee returns to Valentin and Anna and tells them it’s been arranged. Anna agrees to go forward.

Esme is let into Spring Ridge, upset at being left alone. Heather finds her and pets her hair and tells her everything will be okay.

Esme asks who she is. She almost says she’s her mother but tells her daughter that she’s a fellow inmate.

Esme thought for a moment she knew who she was or why she’s there.

Heather wishes she could tell her.

She introduces herself and knows her name means beloved. Esme wonders where her family is when she needs him.

“Maybe they’re closer than you think,” Heather says. Esme fights tears. Heather says being here is better than Pentonville. Heather makes friendship bracelets and Esme refuses. She has no friends.

Heather offers to give her one. Esme asks why she’s so nice to her. Why should she trust her? Heather laughs. “That’s my girl.” Esme’s confused as to why she said that.

Heather covers. She tells her to avoid Ryan Chamberlain. Esme remembers the name and says Kevin told her he couldn’t hurt a fly.

Heather calls him as sick as they come. Esme asks why she’s in there. She loves too much. It was about her sons.

One’s in the slammer and the other is six feet under. Esme’s sorry. Heather has a daughter.

She acts a little too forward and grabs Esme’s belly while she talks, causing Esme to freak out a little and jump up.

Heather apologizes. The guards take Esme away and Heather’s saddened.

At Kelly’s, Ava visits Spencer and explains she plans to ask for Wyndemere when she divorces his dad.

Spencer doesn’t care. He comments that Esme doesn’t know her baby isn’t his. He doesn’t want his father to ruin the baby’s life. She talks about being happy for a time with his dad. Spencer used to think she was the root of all evil and he knows he was wrong.

He wants custody of Esme’s baby, to salvage something good in their relationship. Diane told him its a long shot.

Nikolas will know when the time is right, he says but he hasn’t told Trina.

He’s not sure she should He asks if Ava will help him with this. She says he can count on her.

At the hospital, Nina tells a nurse that she wants to donate her bone marrow to a patient and wants to know where to go and what to do.

Sonny asks her to slow down. She has a lot going on.

In Willow’s room, Willow tells TJ she’ll move forward, even if it means having a c-section, though she’s still worried about the baby being premature.

She wants to raise her. She knows the bone marrow transplant could mean that. TJ doesn’t want her to get ahead of herself.

Willow knows. She needs to get confirmation that Nina’s a match. TJ says Nina just arrived. He takes off.

TJ finds Nina and tells her she can do her bloodwork now. Nina apologizes for what she said about him in the past but he’s all business.

They leave to get the bloodwork done. Back in Willow’s room, Michael goes to Carly and tells her today’s not the day to discuss Nina.

She doesn’t want to upset Willow today. Carly understands. Willow calls her in.

They learned the hard way that silence does the most harm.

Carly says that’s why she’s back. To apologize.

If she knew Willow was sick, she never would have kept Nina from her.

She was trying to protect Willow. Michael barks that it was revenge. “It was not!” Carly yells. Willow tells her husband to go and let them talk.

He does and Carly tells her daughter-in-law not to hold back. Willow says she should have told her and should have trusted her to handle it.

She’s not fragile. Carly agrees she’s right. She did the very thing she would hate done to her. She asks for forgiveness.

“I already have.” Carly cries. She’s so sorry and grateful. She loves her as if she was her own.

Willow asks her to go stop by the house to hug Wiley.

In another room, Nina gets her blood taken and she’s excited that this is happening.

Sonny tries to calm her down but she wants him to be happy for her.

She just wants to save her daughter.

She always wanted one. It’s an incredible gift, no matter how Willow feels. “She needs me.”

He thinks Willow’s lucky to have her. TJ returns with the nurse and Sonny kisses Nina goodbye.

He goes to see Willow, who can’t believe she’s asking but wants to know how Nina is.

He tells her she went to get bloodwork and Willow asks him to stop being enemies with Michael if she doesn’t survive.

She knows they need each other.

In the chapel, Michael prays Nina is a match for Willow.

Carly turns up. She asks if he forgives her.

He has no time for this now.

Willow’s all that matters and he goes to be with her.

He tells Willow he’s not sure he can forgive his mother. They hug.

TJ finds Nina and she asks when Willow can get the transplant.

He tells her she needs to wait until after the baby’s birth.

He explains the process. First, they need to ensure she’s a match.

Sonny finds Carly at the chapel.