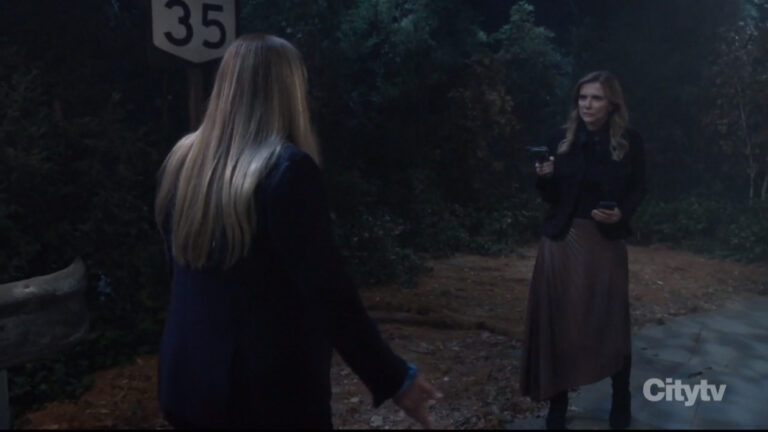 General Hospital recap for Monday, November 28, 2022. In today’s GH episode, Mac and Kevin talk Ava into helping them with Ryan, Robert wakes up and discovers Holly stole his briefcase, and Victor moves into Wyndemere.

We also have Wednesday’s GH recap where Holly knocked Robert out and stole the necklace, and Brook Lynn made a deal to cover for Linc.

Dante is shown into Heather’s cell in Spring Ridge. She’s painting and asks “Detective Handsome” if he wants to model for her.

She offers to tell him whatever he wants to know for a price. He’s not authorized to make any deals. She tells him to come back with someone who can.

After he exits, she gets an idea and then asks her guard to take her to make a call.

Kevin and Mac meet with Ava at the Metro Court. They wonder what this is about. They need her help catching Esme.

Ava wants Esme to rot but has already told the cops all she knows. They think she knows someone who could help find her.

They’ve interviewed everyone Esme had a connection with other than Ryan. He’s refused to co-operate with them so they thought they could use her as bait.

It doesn’t take much convincing. She’s eager to help so she can protect Trina.

At Spring Ridge, a nurse reads the newspaper to Ryan, who seems horrified by having to listen to the pickleball report.

Ava arrives with Mac. They cross over to Ryan. She immediately starts taunting him about Esme. She offers him the chance to get back at Esme for attacking her.

She offers him her company in exchange for his speaking to the cops. Using his caregiver, Ryan tells her they will find Esme together.

In the Wyndemere tower, Esme screams and wonders how the baby is still moving around. Liz shows up.

The nurse checks her over and tells her that she should be taking pregnancy seriously. She’ll have to make do with her.

Esme begs her to convince Nikolas to let her go. The nurse doesn’t think she could.

When she reminds Esme of her crimes, Esme assumes she’s just the prince’s accomplice. She points out that the prince will dispose of her once the baby is gone.

Liz makes excuses and hands her some vitamins before taking off.

She tries to think about what her father would do.

A vision of Ryan appears and she begs for help. He tells her to use the baby. Clearly Nikolas is terrified about the child’s health.

Ryan encourages her to refuse to take care of the baby. It’s her only leverage and she has no other options.

Esme takes the pills anyway. She won’t risk the baby.

Nikolas calls Ava to say he loves her. Victor shows up with his bags and announces he’s moving in.

He tells his nephew that he needs to get his house in order and that means finalizing his divorce to Ava. The tide is turning for the family tonight.

Liz interrupts and is startled to hear he is moving in. Victor is determined to move into the north tower. His edgy nephew tells him he’ll have to stay in the south tower.

When Victor walks out, he calls his goon for news on Holly.

Meanwhile, Liz worries that Nikolas will get caught with his uncle there. He does his best to reassure her before Victor returns.

The nurse takes off. Nikolas lies about why she was there, but his uncle sees through him. He assumes that the prince and Liz are together again.

Victor promises not to cramp his style. He thinks this is just another reason to put an end to his marriage.

After they bicker about this, Victor walks out. He’s furious to hear that Holly has disappeared.

Laura meets with Scott in the square. They catch up and she assures him she will find Lucy’s real shooter.

They notice Holly is sitting there and ask what she’s up to. When she mentions she has business to take care of, they wonder what that could be.

She says some work won’t wait.

Scott steps away to answer a call. It’s Heather. She asks him to pay her a visit and promises it will be worth his while.

Holly explains to Laura that she is doing some contract work for government agencies and needs a ride out of town. The mayor insists on driving her.

Scott arrives at Spring Ridge to see Heather. They talk about Franco. She hates how cruelly he was taken from them.

She complains about how much pain her neck has been in since the accident. Heather wants to sue the city for it.

Scott doubts anyone would sign off on that case. Heather wants him to get her out of there.

She explains that the cops want her testimony about the crash. She’s the only one who can identify who helped Anna escape.

Heather reminds him that Anna killed Lucy. He can get revenge and strike it rich at the same time.

Scott refuses. He claims he only came to check if she was up to anything crazy so he could tell the cops.

She reminds him that she never forgets her friends or enemies.

When she steps into the main room, she bumps into Ryan. They exchange stares and he’s wheeled away.

Diane and Jordan go to General Hospital to see Robert. Jordan is sure he was drugged.

TJ takes off to run a tox screen.

Robert wakes up. Diane tells him about his passing out after a tequila shot. He notices his briefcase is gone and so is Holly.

Jordan explains that they have already looked at the security footage and discovered who stole his briefcase. It was someone he’s very familiar with.

After she tells them it was Holly, she has to step away to make a call.

Diane asks Robert what’s going on. He insists he can handle the WSB.

She hopes that Holly won’t be dragging him down with her.

As they drive along, Holly and Laura talk about her memory loss. Jordan calls to say that the necklace has been stolen.

Before she can hear who the culprit is, Holly ends the call and pulls a gun. Laura pleads with her to put the gun down.

When Holly orders her to take the next exit, Laura refuses. Holly threatens her.

After they pull over, Holly leaves her on the side of the road with a phone and drives away.

Laura calls Kevin and tells him to call Jordan and explain Holly stole her care and is armed and dangerous.