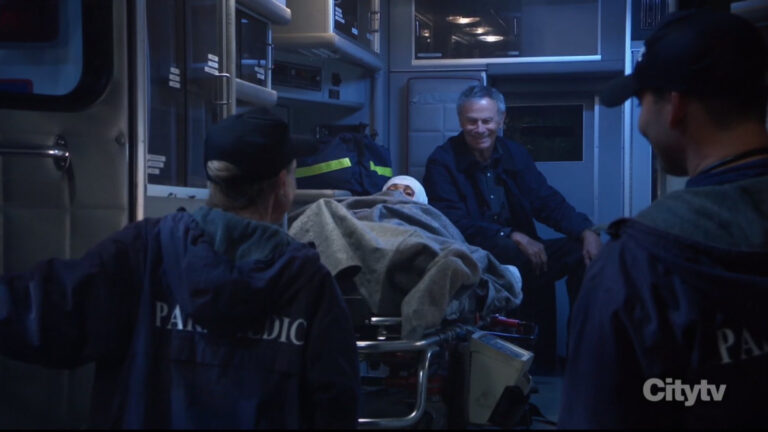 General Hospital recap for Wednesday, November 30, 2022. In today’s GH episode, Obrecht tries to buy Cody off, Curtis and Trina reach a truce, and Ava tells Nikolas about being bait to catch Esme.

We also have Tuesday’s GH recap where the Quartermaine Thanksgiving plans went haywire as the turkey got loose, and Holly went up in flames and the cops closed in.

Outside the cabin the woods, Jordan orders Mac to have the cops move in on Holly. Robert protests. The cabin blows up.

Holly runs out in flames.

Robert puts her out and screams. Mac pulls his brother away so the EMTs can deal with her.

Jordan orders Robert out of the scene. He joins Holly in the ambulance. This was all a ruse. She’s fine and the EMT is Felicia.

They drive off. When they get down the road, Holly thanks them for their help. She explains to Robert that Felicia brought her everything she needed to fake being on fire safely.

They tell Felicia they also faked Robert’s drugging to pull the wool over Victor’s eyes.

After they explain how they will keep Victor distracted for long enough for Holly to get her son back, Holly flashes back to making a deal with Selina: the jewels in exchange for drugging Victor.

After she explains he has her son, Selina says there is a place in Hell for men like him.

Holly tells Robert that she’s sorry for everything. They kiss.

Before she can walk away, he asks for the necklace. She hands it over and asks him to be careful with it and his heart.

Holly slowly walks into the mist, blowing him a kiss.

Meanwhile, back at the cabin, Mac shows Jordan that the cops discovered the remains of Robert’s briefcase. The necklace is gone.
Mac thinks it could have been ditched or still be with Holly.

At Curtis and Portia’s, she insists on taking the last piece of his sweet potato pie to Terry.

They sit down and he tells her grateful he is that he had a father to fuss with this year. He wonders if it’s possible for his disease to flare up again.

She gets awkward and claims she’s not up on the science and changes the subject.

Trina slips out to the balcony. Marshall is there, cleaning his clarinet.

She sits and they chat about Curtis. She feels trapped due to everyone protecting her from the hook.

He assumes she’s frustrated that she can’t go out and see Rory. When she asks why he never talks about his schizophrenia, he tells her he sees no point in dwelling on the past.

Curtis interrupts and asks his father to come in and watch the game with Portia.

Once Marshall goes in, Curtis joins Trina and offers her some pie.

They talk about boundaries and make a truce.

Inside, Marshall tells Portia he daughter is feeling a little hemmed in. She asks if he will play his clarinet tonight and asks if his illness ever gets in the way of performing.

He explains it has never inhibited him and asks why all the questions.

When she suggests he seek genetic counseling, he doesn’t see the point.

At the Quartermaine estate, Chase asks Brook Lynn if she was ever going to write the letter that was going to give him the fighting chance to get his badge back.

She claims she’s been crazy busy. He asks when she was going to tell him about the letter… was it never?

She momentarily has a tear in her eyes and claims she meant to tell him. Taking his hand, she argues they need to prove that Linc was a sleaze first.

He points out that doesn’t make sense. Her tears returning, she tells him she did this for them.

She tells him that he is the first time she’s felt true intimacy. That has only become deeper since they’ve been working together.

She’d be okay never getting back at Linc, but she couldn’t stand the thought of not having Chase work with her. She thought he’d forget about his badge and what they have would be enough for him.

He tells her the singing thing has been more fun that he thought it would be, but it’s not him.

She tells him it could be. Chase explains that it would have to be his choice, but she took that away from him.

“Yes, my singing career is over but so are we!” he declares.

She made him feel like the luckiest guy alive, but they should have set boundaries. Now they don’t work as anything.
He storms out. She sobs.

Britt joins Ava at the bar in The Savoy. She starts drinking and then stares over at Cody.

Britt explains to Ava that she’s had very little sex. She hasn’t had actual relationship sex with anyone since Nikolas in 2014.

Nikolas strides over. As he and Ava lock eyes, Britt talks about how nice it would be to be married. She’s never had a husband or birthday party. The doctor orders another round.

Obrecht spots Cody and pulls him aside. She tells him she was moved by his apology. Her daughter is a lonely person and needs her mother right now, not a romantic distraction. If it’s money he wants, she will make sure he gets it.

She offers him six figures, but he doesn’t want it. He admits that he wanted the fortune and Britt, but it looks like he can’t have either.

“Answers were never on offer,” she says.

Victor joins Selina at a table. Looking at a text about Holly and the necklace, he tells her that he hopes to soon have the incentive he needs to pull his family together.

She complains about her family and they talk about the imperative to protect them no matter how disappointing they are.

When she suggests they continue this conversation, he toasts to that. They chat about Nikolas and love.

When she spots Britt stumbling and babbling about looking for the sponge-worthy, they walk over and escort her away from her friends.

Once they get her to a corner and she pushes them away, Victor realizes she isn’t drunk, she’s sick.

Liesl runs between them, slaps Victor and threatens him. Cody pulls him away.

Obrecht says there is a place in Hell for men like Victor. “The ninth circle,” adds Selina.

As Victor sits, Selina has a drink sent to him. She looks at the drug Holly gave her.

When he gets a text from his goon that Holly is disabled and the necklace gone, he smashes his glass.

Britt tells her mom that her legs went out from her. She’s determined to throw herself a birthday party and go out dancing.

Back at the bar, Nikolas tells Ava he has no intention of divorcing her. She tells him about becoming bait for the PCPD to catch Esme.

He thinks that’s dangerous, but she insists Ryan is a “turnip” and it’s worth either of them being prosecuted to keep Trina safe.