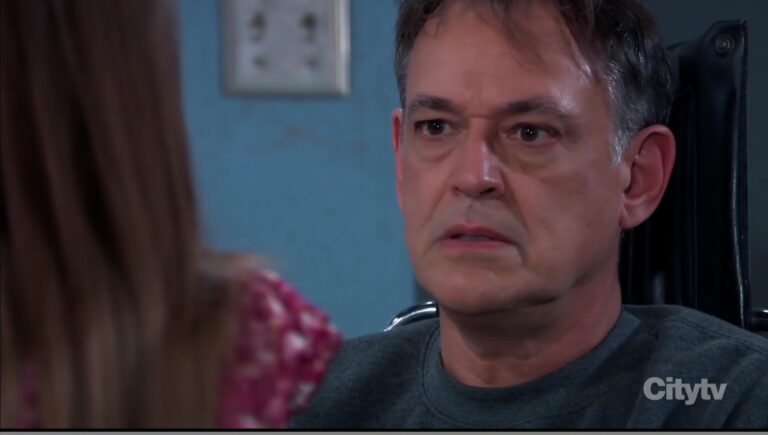 We also have Monday’s GH recap where Joss caught Esme spying and accused her of making the sex tape.

In a classroom at PCU, Esme tells Joss and Cam that she wasn’t in the cabin when the sex video was made. She urges them to ask someone who was. When they turn around, Trina is there. They fill her in. “I’m so sorry,” she says. “Are you though?” asks Esme.

Esme points out that whoever recorded the video was in the cabin. Cam is sure there’s an explanation. Trina says they were set-up and lists all the nasty things Esme has done. As Trina gets more livid in her accusation, Esme stops her by saying she’s not to blame.

When she suggests that the drinking game pushed Trina over the edge, Cam has to hold her back as she loses it. Esme claims she never would have provoked her if she knew she would act like this.

Joss gets in her face and calls her a sociopath. Cam says she’s toxic and orders her out. “I hope you realize who your true friends are some day,” Esme says, walking out.

Trina doesn’t know who Esme thought she was fooling with that innocent act. Joss tries to figure out how this happened. They have no clue. “I wish that night had never happened!” Joss blurts.

She apologizes to Cam in case he misinterpreted that. Trina gets a text. The video has been uploaded on an x-rated website. The couple runs off.

Harmony is surprised when Kevin drops by Spring Ridge to see his brother. He rarely visits Ryan and asks for an update on his condition. She explains he only communicates by blinking. They communicate with a letterboard but it doesn’t seem to work well with anyone else. Ryan expresses no interest in communicating with his brother.

Ryan gets Harmony to read him “Wuthering Heights.”

Nikolas stops by to see Spencer. His guard asks if his son actually wants to see him. Spencer sheepishly approaches and agrees to speak with his father. Uncle Victor encouraged him to give Nikolas a shot. He’s surprised his father never gives his uncle the benefit of a doubt.

Nikolas agrees with Victor’s stress on family. That’s why he’s there to mark two decades of losing Courtney. Spencer points out that he has lost his father twice. Nikolas says he’s lost his son once.

The prince tells him about visiting Courtney’s grave. He wanted to ask her for help so he could be a better father. Sonny interrupted to remind him of his failings as a father. “Where does your wife fit into any of this?” Spencer asks.

Nikolas asks him if he can put the past aside so they can start fresh. Spencer thinks his mother would want him to say yes. Esme strolls in and Nikolas offers to return for a visit next week.

After the prince exits, Spencer apologizes to his girlfriend for treating her thoughtlessly. He’s grateful that she understands where he’s coming from and offers to be more sensitive when it comes to mentioning Trina. “I’m not sensitive to her, I’m just onto her,” she says.

Spencer is bewildered. She knows that he has a relationship with Trina and they share secrets. He insists they are just friends. She tells him that Trina recorded Cam and Joss of having sex and sent it to the whole school. He doesn’t believe Trina would do that. “Maybe you don’t know Trina as well as you think,” she says.

When she turns her back, he sends Trina a text asking if she’s okay. He has to return to his room for a regular room check. Esme approaches Ryan when he’s left alone. “What the hell are you doing?” he mutters between his teeth.

Maxie joins Britt at Metro Court with Bailey Lou. After the doctor fawns over the baby, Maxie asks if she can forgive her for the secrets she kept. Britt doesn’t think there is anything to forgive. “Things happened. It’s okay,” she says, adding she’s proud of her.

They talk about never having to worry about Peter. Maxie is worried about whoever he was working with. Obrecht and Austin are convinced it was Victor. Maxie just wants to relax and hang out. They talk about how her kids are adjusting to their new little sister.

Maxie can’t help but mention Austin. She knows he messed up but apologized and his personality cracks her up. She wants to see where it goes… but slowly. When she asks Britt if she has anyone knew, the doctor claims to be too busy. Her friend assumes it’s something else.

Britt tells her that history is made by women blazing trails. Maxie agrees but that doesn’t mean she can’t date. The doctor makes excuses but the blonde dismisses them all and suggests she try a matchmaking service.

At Sam’s penthouse, she, Laura, and Drew discuss their plan to deal with Victor. They agree not to get anyone else involved. Dante stops by with coffee and guesses he’s interrupting something. Laura asks him in and explains they are plotting something legally murky.

After the cop agrees to be discrete, he asks what they are doing. The mayor leaves the others to explain and advises no one to make a move without consulting her. Once she’s gone, Drew says they are planning to stop Victor.

He explains that Victor tried to activate his conditioning. They assume that he wants Drew’s memories. Andre claimed those memories have been wiped but Victor doesn’t know that. They are going to play along so they can learn what his objective is. To do that, they need to get him a tarot card and make him think he found it himself.

Sam has a brainstorm. “Peter is going to give it to him,” she says. The WSB would have all his personal effects and those would go to Bailey. They need to plant the card among them so Victor can find it. Dante makes a call. He learns his belongings have been delivered… to Britt.

Ava shows Victor into Wyndemere. He’s there to see his son but is happy to relay his message to her. He explains that Spencer is struggling and her husband is making it worse.

They have tea and argue about her having Spencer charged and locked up. They can’t change the past, but he thinks she should rethink her future plans for a vow renewal. That doesn’t go over well. Ava thinks Spencer should be less concerned about his father’s love life and more about his own.

Given that the ceremony is a family affair, he thinks it should include the whole family. A small ceremony would only widen the gap between Spencer and his father. She insists that she will decide that with Nikolas. He muses on the rifts in the family and why he is always trying to help mend things in times of trouble.

Ava flashes back to Laura encouraging her to get close to Victor so he will confide in her. He tells her that he has big plans for the family and may need her help. She offers to open the ceremony to the rest of the family if her husband agrees.

Nikolas shows up and the three of them discuss the vow renewal. She suggests they invite Spencer. Victor offers to help. The prince recognizes that he has a lot of pull with his son. That’s fine, but he’s worried about what he’s hiding. Victor admits he has ulterior motives.

Victor is determined to unite the family and thanks them for reconsidering their plans for a vow renewal. They awkwardly toast with tea.

Laura joins Kevin at the Metro Court. He tells her Ryan refused to communicate with him. He’s not sure what that means but it makes him uneasy. She tells him about the plan to get Victor out of town. They need the right bait to trip him up.

He asks if she will bring Tracy into her plans. She says she’s too much of a wild card. Laura admits that she wants to go to Austria with Anna. She still feels a kind of loyalty to Luke. He can understand. She’s not going anywhere. They have enough trouble in Port Charles.

Meanwhile, Britt gets a box and a letter delivered. She tells Maxie it’s what’s left of Peter.