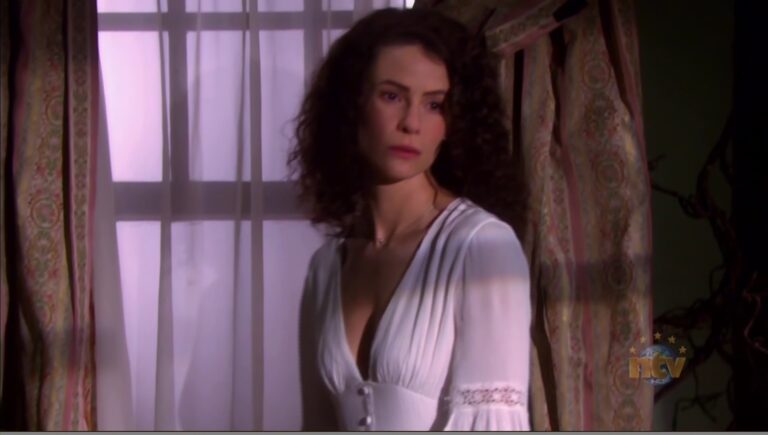 SoapsSpoilers hears that Marci Miller (Abigail Deveraux DiMera) could be exiting Days of our Lives in a permanent way when Abigail is gruesomely murdered.

We’re also hearing a rumor that Victoria Konefal is leaving Days as Ciara Brady. We’ve heard mixed rumors about Robert Scott Wilson staying and that he’s leaving with her. We’ve also heard that the couple has already left and more rumors that they were seen on set this week.

SoapsSpoilers usually doesn’t post rumors because they’re just that and at times don’t have a grain of truth to them but with Ben and Ciara being such a popular couple, we thought we’d put it out there.

We also think it would make more sense that they left together if indeed they’re heading out of Salem. When more news becomes available, we’ll update.

Coming up this February!

As we’ve seen already, Abigail (Marci Miller) started to piece the story together of what happened to Sarah (Linsey Godfrey).

This got her shipped off by Ava (Tamara Braun) and Gwen (Emily O’Brien) to a DiMera owned desert island where she woke up with Kristen (Stacy Haiduk), welcoming her to Fantasy Island.

Steve (Stephen Nichols) and Kayla (Mary Beth Evans) are also on the island and Carlivati shares that Sarah’s return has an unusual twist.

Chad (Billy Flynn) and Tony (Thaao Penghlis) get involved in their search for Abigail which leads them right to the island.

They team up together to try to find her and everyone is headed to the island.

Xander (Paul Telfer) finally puts his feelings for Sarah behind him and proposes to Gwen as we finally see Sarah on the island.

Meanwhile, Ciara (Victoria Konefal) and Ben (Robert Scott Wilson) decide to find a new place to live since the room above the garage isn’t big enough for three.

Something comes up that makes them think the devil isn’t gone. They start worrying about how safe their unborn baby is.

They begin their own investigation into learning if they’re right and that the devil has returned.

EJ (Dan Feuerriegel) makes it to Statesville and when he gets there, he learns his cellmate is Clyde Weston (James Read).

For those who don’t know or remember, Clyde’s the one who killed EJ when James Scott left the show eight years ago.

This is the first time they’ll be coming face-to-face, which will lead to an escalation of bad feelings for them.

Incidentally, for those new viewers, here’s a refresher on who Clyde Weston is and all his misdeeds.

Days spoilers up to February 4 before the Olympic pre-empts

JoDevil enjoys his chaos and disrupting the happy couples of Salem.

Johnny (Carson Boatman) continues to pursue Gabi (Camila Banus), determined to get her into bed.

Elsewhere, Tripp (Lucas Adams) proposes marriage to Allie (Lindsay Arnold) and they happily plan their future which of course, means that JoDevil is going to mess it up by stirring the pot.

This groundbreaking story of Craig (Kevin Spirtas) coming out as gay to Chloe (Nadia Bjorlin) is just beginning.

Craig comes out to Nancy (Patrika Darbo) and their marriage is crumbling as Chloe leans on Brady (Eric Martsolf) for support, though she isn’t ready for romance.

Rafe (Galen Gering) has been accused of impropriety at SPD and has Trask (Tina Huang) going at him full force.

Nicole (Ari Zucker) suspects Ava’s behind it and framing the commissioner. She tries to prove this. Nicole and Ava will wind up in a confrontation.

TR Coates (William Christian) is Ray, Lani’s (Sal Stowers) biological father. He reinvented himself as a movie producer and insists he’s a new man. He wants to prove this to Lani.

he’s cautious but wants to get to know him. Paulina’s (Jackee Harry) wary and Eli (Lamon Archey) acts on his concerns and puts the man on notice.