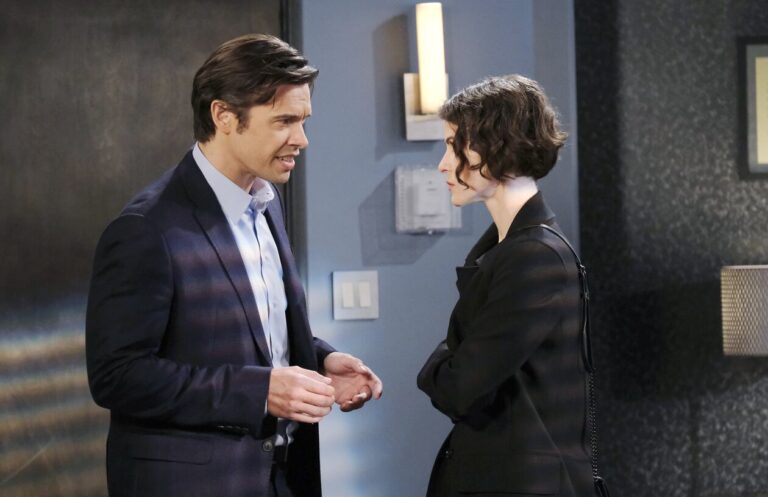 On today’s full episode recap of Days of our Lives, Sarah tries to help Philip but it’s Xander who needs help when he’s taken in for questioning regarding, well, you’ll see. Plus, Charlie and Tripp do a little bonding over their terrible childhoods.

At Salem Inn, Philip tells Chloe and Brady that Xander pulled the plug on his shell company, but that he’s the least of his worries. Angelo calls to rant at Philip because the money’s gone. Philip says they’re coming after him. Chloe says he can’t go home. That’s the first place they’ll look. He can’t stay in Brady’s room with Rachel there, so Chloe offers him to hide in her room. Brady blows a gasket. “That’s not happening.” Chloe says Brady has no control over her life. Philip says Brady thinks he does. It’s why he told him to stay away from her. Chloe tells Brady he has one hell of a nerve. Brady doesn’t want his friend to become collateral damage. He reminds her of Stefan getting her involved with the drug lord. Chloe says this is different and he has no say in her life. “I don’t need you to save me, protect me, or make decisions for me.” She tells him to back off. Philip is grateful to Chloe and accepts.

Sarah visits Xander at Titan, shocked to learn that Charlie Dale was arrested. He’s “such a geek.” Xander reveals Philip now knows that they never broke up, either and that they know he betrayed their family. Sarah thinks Phil must be terrified of his father finding out. Xander says he’s up against something much scarier than Xander. He tells Sarah he dissolved the shell company Philip was using to pay off the mob. Sarah worries that her step-brother will be killed. She wants to call the cops. They can’t let the mob murder her. Xandy asks if they can let them rough him up. Sarah hits him.

At SPD, Nicole demands Rafe tell her why Charlie Dale was released. Allie appears and is updated. There’s no proof that Charlie raped Allie and Ava’s not a good witness because she was drugged and hallucinating. Allie freaks out, angry that he’s walking free. Rafe reminds her the judge didn’t drop the kidnapping charges. They’ll work at adding years to the time he’ll do. Nicole tells Allie she could get Marlena to hypnotize her to remember Charlie raping her. Later, Sarah calls Rafe with a police matter. He agrees to head to Titan.

Charlie walks in on Tripp in his apartment. Each wants to know why the other is there. Charlie says he was released on bail. He asks if Tripp was planting evidence. He goes to call the cops and Tripp says not to bother. What he did was nothing compared to what Charlie did. He plans on proving he kidnapped their mother and held her there against her will. Charlie denies terrorizing her. “I restrained her for her own good.” Tripp asks, “Is that what you do Charlie? Restrain women for their own good?” They argue about that and Tripp knows Charlie drugged her because she knew he raped Allie Horton, not him. Charlie calls Tripp the “golden son.” He had to hear about how devastated she was when she was forced to give his brother up and created a hole in her heart she could never fill. His father worked for their grandfather. Tripp heard Martino did a number on her. Charlie says Ava didn’t love him or his father. “I was a baby. Her baby, but she just walked away.” Tripp assumes she couldn’t take care of him. His dad brought him over to visit her sometimes and she was never happy to see him. Charlie always wanted to be close to her but she only sees Tripp. Tripp tells Charlie about his step-father using him as a punching bag. The bond over their terrible pasts and Tripp says the best thing his brother can do is to confess.

Steve visits Ava in the hospital. She touches him to ensure it’s really him. He tells her it’s him and it’s okay. He tells her Charlie drugged her and asks where Tripp is. Ava worries Charlie got to him. Steve has to calm her down. He worries for Tripp and calls him to ask where he is. Tripp doesn’t tell him but says he’ll be there soon.

Just as Tripp’s about to convince Charlie to go to SPD, Steve’s call breaks up the moment and Charlie kicks him out. “What kind of name is Tripp, anyway?” He asks. Tripp goes back to the hospital and tells Ava and Steve about his visit with his brother and Charlie’s claims that he was never in London and didn’t rape Allie. Ava says he’s lying. She’s the one who sent him to London! She wanted to know more about Tripp and Charlie was desperate to get her attention.

Nicole and Allie take Henry for a walk through the square. Allie loves him and worries about telling him how he was conceived. Nicole reminds her that they’ll all be there to support her when the time comes. They talk about her going to therapy and getting hypnosis with Marlena, though Allie doesn’t think she could live through that night again.

Rafe arrives at Titan and Sarah tells him that Philip’s life may be in danger, though she can’t say why. Rafe says he can’t do anything about that, but he needs to take Xander to the SPD to discuss a kidnapping.

A spoiler for the next full episode of Days of our Lives: Chad takes another hit, thanks to Gwen.