Home » Young and Restless » Y&R Recaps » Ashland & Victoria Go Behind Adam and Victor’s Back, While Sutton’s Verdict is in — Plus, Lily Makes an SOS Call

Ashland & Victoria Go Behind Adam and Victor’s Back, While Sutton’s Verdict is in — Plus, Lily Makes an SOS Call 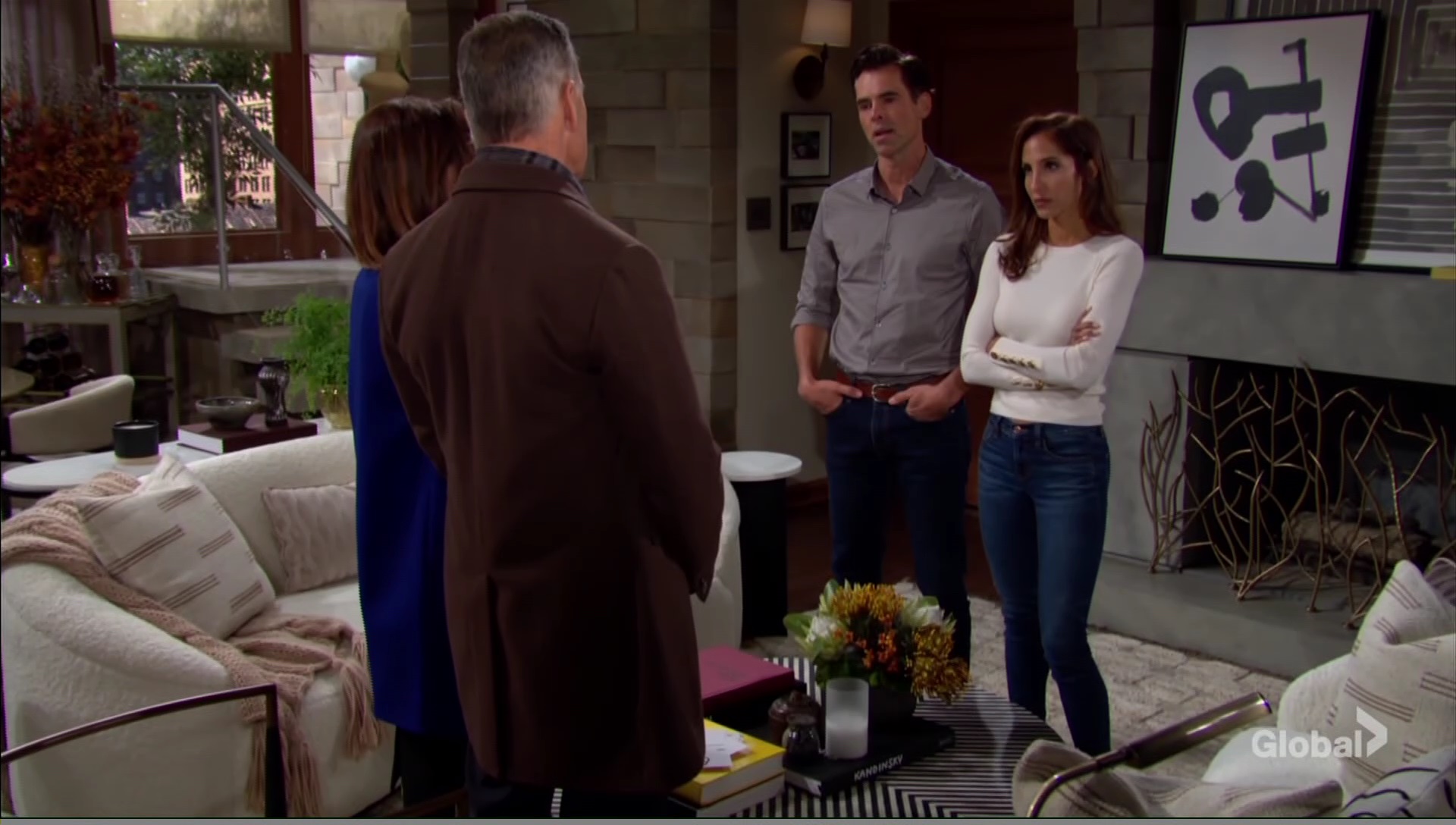 Canadian Y&R day ahead recap for Monday, November 22, 2021 episode, which airs in the USA Tuesday, November 23. (Recaps live by 5:45 PM EST daily.) In the previous episode, Phyllis and Sharon had a showdown. In this episode of CBS’ The Young and the Restless, Sutton’s found guilty, Victoria and Ash tell Lily what their idea is to ensure ChancComm has a chance, while Devon spends time with Dominic.

At their condo, Billy tells Lily he went to Victor to protect her and ChancComm. She asks if he thinks everything will turn out if he backs down. He does, thinking Adam will hold his fire. Lily says he basically already told her he’d try to buy them out. Billy thinks that they’re going to do more than that. Lily says he handed them the weapons. She loves him but he’s so impulsive and doesn’t think about the consequences. What he’s done looks like an admission of guilt. She suggests they sit with their lawyers and lay out the options. She asks if he’s even capable of doing this.

At Newman Enterprises, Victoria and Ashland discuss how Billy told Victor he’d step down at ChancComm. Victoria’s shocked and asks if Lily was behind it. It doesn’t sound like him. Ashland doubts it. He saw her earlier and it didn’t seem that way. Ash tells Victoria that her dad and brother are gleeful.

He gets up and seems to have issues breathing or some pain or something. Victoria asks what’s wrong. She gets him some water and he tells her that it’s just a sign that the medication is doing its job. He feels better. He tells his wife that he’ll let Victor and Adam handle Billy. Victoria thinks that’s a mistake. Ash thought she got over her urge to protect Billy.

Vic says it’s not that, but about what’s best for Newman-Locke. He talks about how this plan got him out of a blackmail deal he’s had for decades. She wonders why Adam and Newman Media would benefit most. She mentions a big chunk of Newman being sold to ChancComm. She thinks her dad would be disappointed if she didn’t try to get it back. Ashland laughs and says he loves the way  her mind works.

At Devon’s place, Elena tells Devon that she’ll prescribe an ointment for the baby’s rash. Elena recalls when they first met and he was devastated to lose Hilary and his child. She thinks he’s healed a lot with his life with Amanda and Moses and the baby. Devon admits he’s in a much better place. He’s glad to be able to help Abby out.

Amanda arrives and Elena tells her why she’s visiting. Amanda’s relieved. She tells them the jury’s ready to give their verdict on Sutton’s trial. Elena goes and Amanda worries the jury will believe Sutton and that he’ll go free. Devon tells her to stay positive. She’ll find a new way to hold him accountable if that happens. “It’s not the end,” he says. She thanks him. He knows what she needs to hear. They leave.

Chloe and Sally meet at Society to discuss how Adam wants to put Sally on camera. She can’t believe it’s happening. Chloe finds it a phenomenal idea. It’ll take a lot of overtime, Chloe says. Her first video will be crucial and they should showcase her, first, before interviewing. Sally says her personal life won’t complicate things. She let Adam go as a possible love interest. Chloe thinks she’s using reverse psychology on herself. She thinks Adam will chase her. Sally doesn’t want to cause issues for him and his ex.

Billy lets Ashland and Victoria into his place. Vic brings up selling him her media division. Ashland assumes Billy thinks stepping down at the company will protect ChancComm and Lily. Ash thinks he must understand now why he wanted to keep Gaines’ blackmail kept private. Billy does. He asks why they’re there after aligning with the Newmans to get to them. Ashland won’t defend himself. He did what he did to divest Billy of his relentless tactics. Ashland says now Lily and Billy will be the ones defending their integrity and credibility.

Lily assures him they can deal with it but Ashland says not without his help. He can cancel the lawsuit or prolong it by releasing the recordings for as long as he likes. Billy asks for his plan. Ashland doesn’t want to play games. He wants to offer them and Jill a lucrative offer. They’d bring ChancComm into the Newman-Locke fold and keep Lily on as CEO. Billy asks where that leaves him and Ash says Billy’s out. Billy asks if Victoria’s agreeing to exploit the damage Victor and Adam did and kick him out of the company?

Ashland calls him slow to catch on. “This is all Victoria’s idea.” They try to get Lily to see things their way. Ashland’s excited to see what she could do with this. Having Billy run it into the ground isn’t in her best interest and watching Adam take it from them away from them isn’t, either. She can’t stand watching Adam do this. She wants what’s best for the kids.

Billy asks why she’d go along with this knowing that they were hacked. Victoria doesn’t respond and tells them that she knows they need time to consider the offer. Ash says they’ll be in touch. They go. Billy thinks Lily should take the job. ChancComm will thrive with her in command. She doesn’t like how Ashland and Victoria treated him. Besides, this is up to Jill, not them. Billy asks if they’re good and Lily kisses him and assures they’re fine.

Elena sees Mariah at Crimson Lights. She tells her that she just came from checking on Dom’s heat rash. She sees it all the time with new parents. Mariah shoots her a look. Elena apologizes. She didn’t mean it that way. Mariah gets it. He’s the biological father. Elena asks how she is. Mariah is feeling like her old self and talks about the support she’s getting from Tessa. Elena asks if she’s given thought to therapy. Mariah tells her that she has that with her mother.

Back at Society, Amanda is surprised that Imani feels bad for her grandfather’s verdict. Imani says she wanted him brought to justice and should be thrilled he was but she’s having a hard time processing it. She grew up idolizing him but guesses Amanda wants to celebrate. Amanda doesn’t look much like celebrating. She knows it’s hard for her sister because of her long and complicated relationship. He’s someone different to her. Imani’s not trying to bring her sister down. Amanda is glad. It’s hard for her to feel sorry that he’s getting what he deserved.

Imani says she just  needs to get over the shock. She asks what sentence he’ll get. Amanda doesn’t want to speculate. She wants to know what’s next for their family. For Naya. “She’s considering moving to Genoa City,” Imani reveals. Amanda’s thrilled but Imani reminds her she’ll micromanage their lives.

At home, Devon looks very happy as he plays peek-a-boo with Dom, he talks to him and then falls asleep with him on a chair. When the baby wakes up crying, Devon pats his back. Amanda arrives and he’s asleep on the sofa with Dominic on him.

Ashland and Victoria arrive at Newman Enterprises. They talk about the impact for the children. She thinks it’s a good idea to send them to boarding school for a year. Ash knows this isn’t a decision to deal with lightly. She knows Billy will go of the rails and doesn’t want the kids to witness it. She tells Ashland that she doesn’t want to rescue Billy. Ashland is supportive but he wonders if Billy will go for it. He’ll be unemployed and probably want to spend time with them. “You let me manage Billy,” she says.

Billy drinks alone at the bar at Society, while Lily calls Jill and leaves a message to call. “We need to discuss the situation at ChancComm.”