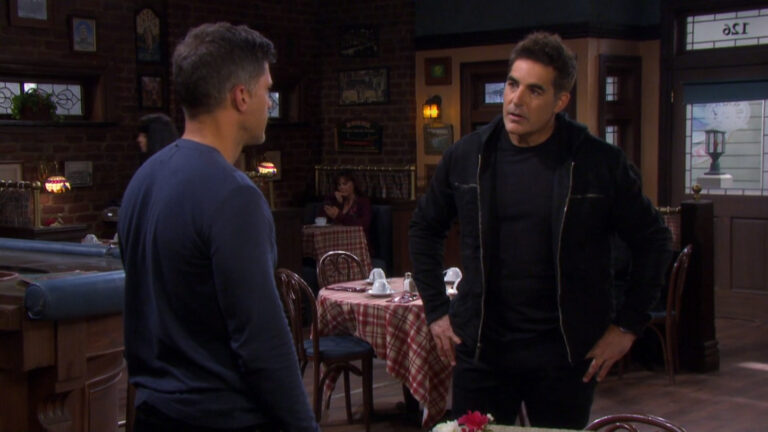 In today’s Days episode, Rolf turns the tables on Johnny and Wendy, Chloe walks in on Stefan and Gabi in a heated moment, while Kristen and Li wonder what his sister is up to.

In the last Days recap, Chanel reveals the story of how Sloan’s mother died while Alex and Steph get cozy, and Li learns where Wendy and Johnny went.

At Basic Black, Brady finds Nicole at work. He tells her Alex is thrilled with the Bella cover and wouldn’t shut up about the chemistry between her and Eric.

He wants a second shoot. “Oh, God. Shoot me now,” Nic says. Brady notices she’s wearing the same thing she had on yesterday.

She’s been there all night. Holly slept over with Maggie.

Brady worries about her. She reveals she dumped Rafe for Eric and told him last night.

Brady admits he’s not that surprised since his brother and her seem to make their way back to one another.

Nicole rants about getting what she deserves. She reminds him she cheated on Eric with a man she detests, blew up EJ and Sami’s marriage, and Rafe’s relationship with her best friend Ava.

Brady thinks she did Rafe a favor and EJ and Sami can take most of the credit for their relationship issues.

Nic says she is no better than Ava. Brady reminds his BFF that Ava is a Mafia Princess.

Every time Nicole says something bad about herself, Brady turns it around.

She reveals Jada’s pregnant and she hasn’t spoken to Eric since.

Brady says nobody needs to co-parent as a couple. Nic reminds him he moved in with the mother of his child and this is Eric.

Brady calls it complicated. He knows Nicole doesn’t think she deserves anything good but she’s wrong. They hug.

Eric thinks of Jada at the pub when he comes face-to-face with Rafe.

Rafe brings Nic’s laptop but Eric says he hasn’t seen her since yesterday.

Eric apologizes but Rafe doesn’t want to hear it.

He doesn’t understand why Nicole didn’t stay there last night.

Eric calls it complicated. Rafe wonders if Jada’s getting kicked out. Eric denies that.

Eric knocked her up knowing he was in love with another woman.

Does Jada know he’s leaving her? Jada appears. She’s moving out. Rafe offers to help her move out.

She realizes  Eric told him and yells at Eric for talking to her boss about her body.

She tells him he can have Nicole because she wants nothing to do with him again.

Eric wants to talk. Rafe’s uncomfortable. He tells her to call if she needs him.

Jada tells Eric she doesn’t need him and when Rafe asks if she needs time off, she lets Rafe know she will tell him when she decides what to do.

She admits to Eric that she thought he still had feelings for Nicole.

She chose to ignore it. Eric says he’ll support her in whatever she decides to do.

This surprises Jada. He says he’s always wanted a child and never thought he could have one of his own.

If she decides to carry the baby, she can count on his support. She asks where that leaves him and Nicole.

In his office, Stefan tells Gabi he hates her. She hates him more.

They share an electric moment with him manhandling her.

Chloe appears and learns that Li gave Chloe a promotion and now she’s working with Stefan.

Gabi gets a text from the wedding planner about the engraving fonts. Chloe says it’s nice and Stefan takes a look at the invitation.

She asks why he cares.

He seems to be unsure and reminds her she likes bells and whistles. Why isn’t she taking her time?

Gabi asks why he’s bothered. He says the first time he set foot in Salem was New Year’s Eve.

Gabi gets nasty, thinking of how they’d be spared the pain if he never came.

Chloe gets between them and tries to get them to stop arguing. Gabi realizes they’re a couple. They work fast.

Gabi jokes about them marrying soon. When they register, she’ll get them steak knives.

She takes off. Once she’s gone, Stefan continues to rant about Gabi.

He tries to tell Chloe he hates her but Chloe asks, “Are you sure about that?” He reassures her and they make out.

At the town square, Li learns his sister is in Jakarta and wonders what she’s up to.

In Jakarta, Wendy finds Johnny’s hands cold as he fits her with a mic.

He touches her cheek and she admits she’s nervous about meeting Rolf.

She’s still in but worried her brother is capable of something vile.

Johnny repeats what he said before about knowing what his father’s capable of.

She ignores his call but worries about what it’ll mean since he knows she’s always got her phone.

Li calls Rolf from outside at The Bistro. He doesn’t answer.

Kristen appears with holiday bags from shopping and he fills her in on his sister going to Jakarta for no reason.

Kristen asks if she is playing hookey but Li says no.

She doesn’t do stuff like that. In other circumstances, Kristen admits she’d admire her.

Li thinks she might suspect what they did to Stefan. Kristen thinks he’d better track Wendy down before anything happens.

Gabi arrives. Why are they together? Li lies that Kristen asked for her job back and was upset when he turned her down.

Kristen hides a smile and plays along. “It was worth a shot,” she says, gathering her holiday bags. She goes and Gabi asks if he lied to her about getting Gabi Chic back.

He couldn’t even get Kristen’s job back. Li says they[‘re different situations.

EJ sees Kristen as a traitor and EJ sees Gabi as a minor annoyance. Gabi is placated. She asks if he found Wendy and he lies that she was playing hooky.

Gabi finds that strange. Li shrugs that his sister is full of surprises.

Back in Jakarta, Johnny and Wendy settle on ‘Black Belt’ as their secret code.

They knock and Rolf answers. Johnny hides nearby.

She introduces herself saying Li sent her to ensure he has everything he needs.

She calls the lab perfect. He asks for more fruit flies. She’ll get on that. Rolf says he didn’t get a heads-up from her brother.

Wendy thinks he must have sent an email.

She talks to him about brainwashing Stefan.

Rolf’s surprised her brother told her. The scientist was happy to help.

She starts talking about DiMera alliances and before she can ask about EJ’s possible involvement, he receives interference from a device on his desk.

From outside, Johnny yelps as he hears a buzz in his ear and Rolf asks what was that?

He grabs another device and says there was “sudden electromagnetic interference.”

He uses the device on her and finds the wire. Rolf can see her brother didn’t send her at all.

She yells not to touch her. She has a black belt! Johnny pounds on the door as Wendy says, “What are you going to do with that syringe?”

By the time Johnny gets inside, Wendy’s out cold on the floor and Rolf’s not around.

He checks her pulse and worries and then Rolf shows up and stabs Johnny in the back with a syringe. Johnny yells and asks what he’s doing before he passes out.

Rafe walks in on Brady comforting Nicole in a hug. He hands her the laptop and says he was by the pub and heard about Jada’s news.

He grins. Guess it throws a wrench in her plans with Eric but it’s clear she moved on.

Nicole says Brady’s just being a friend. Rafe gets sarcastic. She should keep her options open.

“Just don’t come crawling back to me.”

We’re running a test. If enough people are interested in reading daily Days of our Lives Peacock recaps, we’ll keep it up.