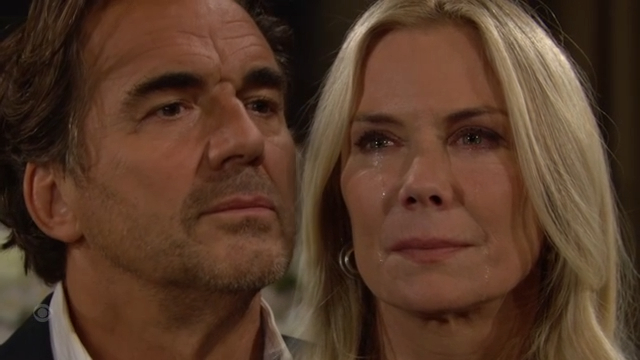 In the Thursday, November 17, 2022, full episode recap of CBS’ Bold and the Beautiful, Katie and Donna try to help Brooke make sense of things, and Thomas sends Douglas to his room while the family discus the call to CPS.

We also have Wednesday’s B&B recap where Brooke confronted Ridge and Thomas tried to keep Duglas quiet as Ridge revealed Brooke’s betrayal to his family.

At the Forrester estate, Ridge tells his family that Brooke called CPS on his son.

Thomas and Douglas stare at each other. Taylor and Eric are in disbelief. Steffy is furious.

Eric is sure this is a misunderstanding. Ridge explains he heard the conversation.

Douglas remembers confronting his father about this. Thomas confirms it was Brooke’s voice.

They send Douglas up to bed. Ridge shakes his head in disbelief as his family try to figure things out.

Ridge admits Brooke doesn’t know he’s aware of all this.

Steffy thinks they need to call her out. She can’t get off this easy.

Her brother urges her to let it go and keep Brooke out of their lives. Their father has moved on and they don’t need Logan showing up to cry to him.

Ridge wants to change the subject but no one else will drop it.

They rehash “knifegate” and CPS showing up. Ridge explains that they listed to their recording, and it was Brooke’s voice.

He’s never been so blind-sided in his life.

This is unbelievable to Taylor.

Her daughter thinks it just proves Brooke is unworthy.

Eric remains skeptical. His son gave her the chance to come clean but she didn’t.

Even when she came to Aspen and he prompted her to confess, she acted confused.

Taylor wishes she’d known how they were struggling with this. Steffy asks her father if this is why he’s marrying her mom.

Her father explains that Brooke broke his trust… but that’s not why he’s there.

Taking Taylor in his arms, he tells her he loves her and wants to spend the rest of his life with her.

He deserves someone loyal and honest.

Taylor believes all the wonderful things he says to her. She will continue to believe him no matter what.

Thomas adds that what Brooke did was just one of a million reasons for him to break free.

Eric continues to furrow his brow.

Picking up a drink, Thomas toasts to the love his parents share. After a few obstacles, they finally made their way back to each other.

Finn and Steffy are over the moon.

Taylor tells Ridge she will never let him down and promises to always be honest with him. They kiss again.

Steffy leads her mom away to try on her dress. Ridge stares.

At Brooke’s, her sisters comfort her while Hope is out of town on business.

They still can’t believe she just signed annulment papers and Ridge is already moving on.

Katie insists this can’t be what he wants. None of this feels right to Brooke.

They are sorry she’s going through this. Donna doesn’t see how Taylor can’t see Ridge leaping between women as a big red flag.

Katie asks how Thomas is connected to this. Brooke wonders if she’s missed something and keeps replaying the conversations to herself.

Donna and Katie don’t know how Thomas’ family don’t see him for who he is.

Brooke thinks he’s a total con artist who picked away until he unraveled her marriage.

Donna complains that Douglas has bad vibes. Brooke is sick of discussing him. Katie thinks Ridge lets his children dictate his life.

Brooke thought making vows meant you had to stick with them but now he’s making vows to someone else.

Katie doesn’t understand how he can be off celebrating while he knows she’s there heartbroken.

Brooke loves Ridge and knows he loves her too. Her sisters back this up. She misses him so much already.

Donna suggests there may still be Hope. Her sister doesn’t know what to do or what’s going on. The only thing she knows is Ridge must love her.

Katie is sure his marriage to Taylor doesn’t stand a chance and urges her not to give up.

Alone, Brooke looks at a photo of her and Ridge. Tears roll down her cheeks.