Home » Bold and Beautiful » B&B Recaps » Sheila Carter Reveals Herself to Finn as his Mother, After He and Steffy Marry (Thanksgiving Repeat Episode) 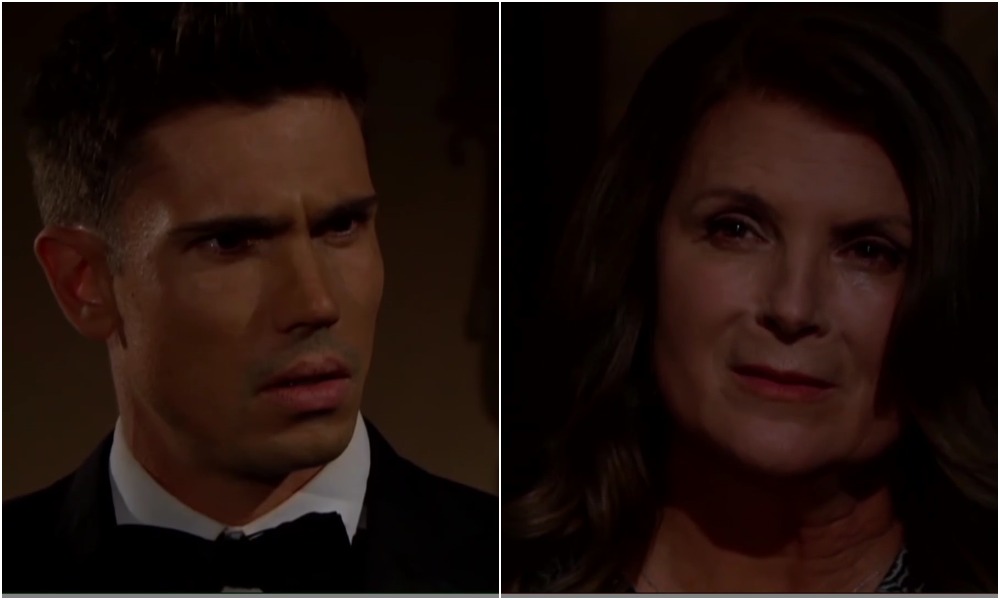 There is no new episode of Bold and Beautiful today due to Thanksgiving. The Thursday, November 25 episode is a repeat of the Friday, August 6.  Tomorrow sports will air on CBS and the show will return with a new episode on Monday.

In the Thursday, November 25, 2021, full episode recap of CBS’ Bold and the Beautiful, Steffy and Finn marry and afterwards, Sheila reveals herself to Finn as his biological mother. We also have Wednesday’s B&B recap where Sheila and Deacon fantasized they were welcomed with open arms at the Forrester Thanksgiving.

In the Forrester’s living room, Jerry, (played by Petri Hawkins-Byrd) asks if there are any objections at Steffy and Finn’s wedding. Since nobody does, Hope tells the couple that love creates harmony in a marriage and family that can transform lives. Her standing up for Steffy proves that. The love they have for their children paved the way for that. Finn helped with that.

Hope’s happy to get to know Li and Jack. She jokes that Finn’s too good to be true. She calls him decent, kind and honorable. He’s marrying someone equally as amazing. She wishes them happiness and the women hug.

Steffy and Finn exchange their wedding vows. Finn tells everyone how excited he is to be marrying his bride with both of their parents in attendance. Steffy has opened herself up to him with her sense of adventure and her spirit and she’s inspired him with her sense of business and devotion as a mother. He will never stop being amazed by her beauty and strength.

Steffy tears up. He tells her she’s given him the greatest gifts. He loves her and says she can depend on him to be at her side to weather any storm, year after year.

Steffy professes her love to him and tells him that he’s an incredible father and amazing stepfather. She’s learned a lot from him, the power of resiliency, acceptance, corny dad jokes.

Everyone laughs. She says he’s been there for her. He’s caring, giving and he’s kind and has captured her heart. The way he is with Kelly and Hayes… his unconditional love. He looks at Hayes with pride, the way his parents look at him. She can’t wait to get to know his parents and everything about him. Jack looks down.

Steffy vows to love Finn the way he loves her. They’re on “this crazy amazing ride, but we’re doing it together.” Finn smiles. Steffy and Finn exchange rings and say their I dos and the Jerry,  the minister, pronounces them husband and wife. The family cheers as the happy couple kisses.

At the reception later, Steffy and Finn mingle with their guests. Brooke tells Steffy how beautiful she is. Steffy can’t believe they’ve actually married. Jack snuggles with Li. Pam is proud of Hope and Steffy for putting their animosity aside. Eric’s thrilled to see them together and Hope comments that it’s good to put the conflict they once shared behind them.

Paris and Zende admire their closeness and Thomas calls Finn the most authentic guy he has ever met.

Pam lets Finn know she has to leave, but assures a concerned Steffy that it isn’t because Brooke took care of the wedding cake. Finn blames himself. Pam likes being a guest for a change. She looks up at Steffy’s portrait and tells her niece it means so much to her to see it. She believes that Steffy is just like her namesake.

Once Pam’s gone, Li calls Finn handsome. Finn wanted this since he met Steffy. The  waitress gives Steffy champagne. Thomas finds her and lets his sister know just how happy he is for her, that she found a man she can depend on. She tells him he doesn’t have to be the overprotective brother anymore.

Nearby, Brooke and Ridge look at Stephanie’s portrait with Eric. Brooke lets her husband know that his mother is always looking down upon them.

Steffy and Finn talk with Hope and Liam about how sweet Kelly was as a flower girl. She was happy to be included. Finn says it was important to them. Liam proclaims that they’ll all do a great job raising the children together. Eric interrupts by clinking his glass and toasts the newlyweds. He says that Stephanie cared more about family than anything else and would have wished Finn happiness.

Finn lets Steffy know that he has to respond to a message left by a patient. He kisses her and takes off outside. Paris tells Steffy how beautiful she looks. Steffy preens and thanks her. Steffy and Ridge share a touching moment as he tells her that everyone is rooting for her to make this work. Nothing will ruin this day.  They hug.

Finn arrives at the guesthouse. He completes the call with the patient and a woman comes out of the darkened room. “Congratulations,” she says. Finn didn’t know anyone was there. He asks who she is and she says, “It’s me, sweetheart. Your mother.” Sheila Carter reveals herself. She repeats, “I’m your mother.” Finn looks shocked.