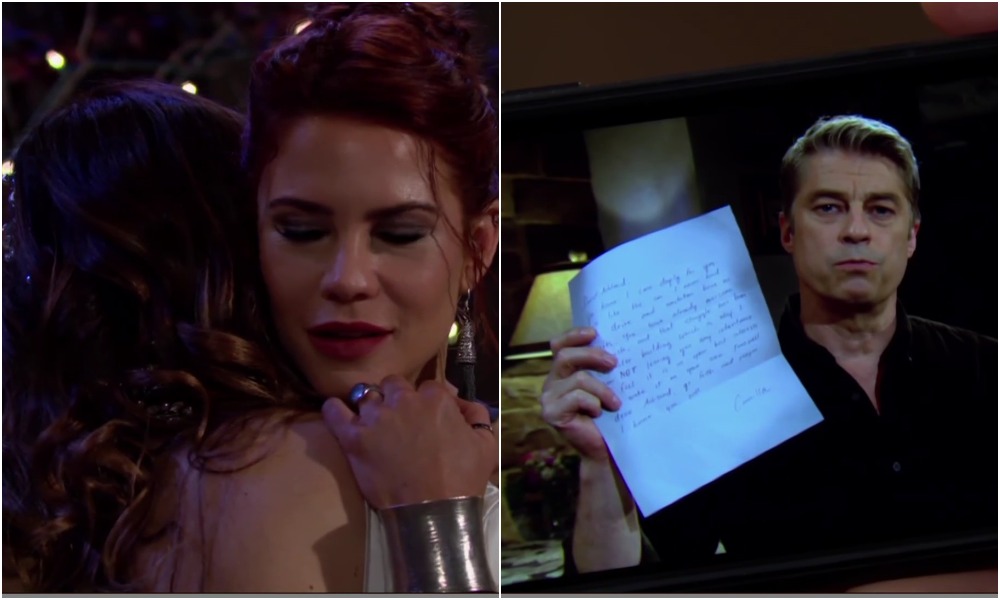 The November 25 episode of Young and Restless is preempted today due to USA Thanksgiving. In the place of a new episode, Y&R have chosen to air Victoria and Ashland’s wedding. Here’s that recap below.

Soaps Spoilers has the Canadian Y&R day ahead recap for Thursday, October 14, 2021 episode, which airs in the USA Friday, October 15. (Recaps live by 5:45 PM EST daily.) In the previous episode, Nick found Gaines and Victoria wore Sally’s dress. In this episode, Victoria and Ashland get married, as Nick confronts Gaines.

At Victoria and Ashland’s wedding, Victoria walks down the aisle with Victor, who tells her she looks stunning. Leslie plays as Tessa sings a lovely song. Victor kisses Victoria’s cheek and wishes her all the happiness in the world. Reverend Leo (Andrew Elvis Miller) begins the ceremony.

The vows begin. Ashland says, “Because of this beautiful vibrant, stunning woman standing before me I am a different man than I once was…” He talks of how she has given him strength and inspired him to cope and strive to be better. Despite knowing him, she has stood by him. He’s not sure he can repay it but he’ll try. He vows to give her his love and support. He promises “absolute honesty” going forward.

Upstairs, Nick finds Gaines in his room and questions who he is and why he’s there. Gaines calls himself a friend of Ashland’s. He shares his name and Nick realizes who he is. Gaines says he knows Ashland’s secrets. So does Nick. Gaines doubts that. He tells Nick all about the forged will. “I’m listening,” Nick says. Gaines tells all and says his father knows. Nick’s surprised. Gaines wants his help in stopping his sister from marrying “that ruthless and dangerous man.” Nick gets a key from the bureau and locks Gaines inside and goes downstairs.

Downstairs, Victoria talks about the connection they have that she’s never felt. He helped her grow as a person in so many ways “and on so many levels.” She’s made mistakes but feels they brought her to Ashland. She knows nobody’s perfect but doesn’t think anyone’s incapable of change or unworthy of love. She believes love transcends all. She wishes she could promise him forever but she can promise they’ll spend every precious second they have together.

The Rev asks if Ashland takes Victoria to be his wife. “I do,” Ash says, smiling. Nick appears and Adam excuses himself. Nick asks if he knows Jesse Gaines. Adam does. Nick says he found him. He’s there to sabotage the wedding and if what the man says is true, he wants to help. Billy watches the men as the rings are exchanged. Adam tells his brother to think this through before doing something drastic. Billy gets a call and Lily tells him not to take it.

Adam asks Nick to look at how happy she is. He asks him not to ruin her day. The Reverand marries Victoria and Ashland and they kiss. Everyone claps. Nick thanks Adam for stopping him but what’s he supposed to do now? Gaines is locked in his room. Adam says he’ll call security while Nick checks on the man. Leslie congratulates the couple in Italian and suddenly everyone speaking Italian.

The Mustache wishes them well and tells Billy Boy to behave himself before Billy goes to the happy couple to give congratulations. All he wants is for her to be happy. She thinks he got his wish. He gives a half-smile. He could use a drink. “Enjoy,” Ash says. Sally says, “Nicely done, mister, Reverand, sir.” She asks how many stay together of the couples he marries.

He frowns and she laughs and then sees a friend. She takes off, cringing. She overhears Lily and Elena gushing over the gown. Sally takes it all in, smiling. Summer gives Victoria Nick’s best wishes, even though he wasn’t comfortable giving them himself. Victoria shrugs. And yet, she felt fine coming on her own. Jack goes to Phylis. She admits she couldn’t bite her tongue. Elsewhere, Noah and Tessa talk about her singing and Leslie’s piano playing. He notices she’s down. She missed her girlfriend.

Nearby, Lily tells Billy that she saw the look on his face during the ceremony. He admits he has some sentimentality. He wants to protect Victoria but the truth is a part of him wanted to prove Ashland isn’t a better man than him. He was hoping she’d judge him as harshly as she judged him at times, which he calls silly since she held him accountable. Lily finds it insightful. He hates that Gaines has a duffle bag of money.

Lily jokes that he’s spent that much gambling. They laugh. Upstairs, Adam and Nick open the door to find Gaines on the bed, lounging. Downstairs, Phyllis texts to see if Nick’s coming to the reception. Summer and Kyle canoodle and talk about their small wedding. He talks about renewing his vows. “With a wife like you, I could do it every single day.” She spots Sally, all alone, and scoffs. She almost feels sorry for her. Nikki strolls with Victoria and they discuss the dress.

Nikki snarks that it took audacity. Victoria says she worked hard on it and she’s wearing it because she preferred it. Nikki thinks she looks stunning. Summer agrees. She’s stunned to learn Sally designed it. Nikki takes Summer to tell her about it while Victor tells his daughter the ceremony was beautiful. He’s proud of her. She cries and says she loves him.

Jack gives Ashland best wishes. Ashland appreciates that. Kyle appears and asks how Ash is feeling. He’s doing alright and thanks him for caring for Harrison who seems very happy. Kyle agrees to keep the parental channels open. He goes to find Victor and thanks him for ensuring the wedding went off without a hitch.

Nearby, Billy looks at the text from Gaines which is a video, while in Nick’s room, Adam admits he didn’t call security. They need to keep the situation as controlled as possible. Victor appears in the doorway and Adam nods at him. Victor knows Gaines is still a threat to Victoria and he won’t let that happen. He stares the man down.

Downstairs, Victoria finds Sally and admits she is glad she got to wear her gown. She doesn’t agree with her methods of getting it to her but it was the one for her. Sally knows she stepped over a boundary but she knew this was the perfect dress for her. Victoria says there’s one last thing to say. She hugs her. “Thank you.”

Elsewhere, Billy shows Lily the video Gaines sent. It’s him detailing all of Ashland’s crimes. He begins by reading the will aloud. Lily asks what Billy plans on doing with the video. He sees Victoria smiling with Ashland and stares as if wondering what to do.

Next week spoilers on Y&R!

Victoria says, “That man was hell-bent on getting revenge on my husband so I need to know exactly how he was handled.  And if he’ll need to be handled again.”

Adam tells Sally, “Maybe people are warming to your charms.”
“The only person I am interested in winning over right now is you,” Sally says, kissing Adam.

Phyllis talks about the tension between her and Nick. Either they’ll go forward or everything is going to fall apart.