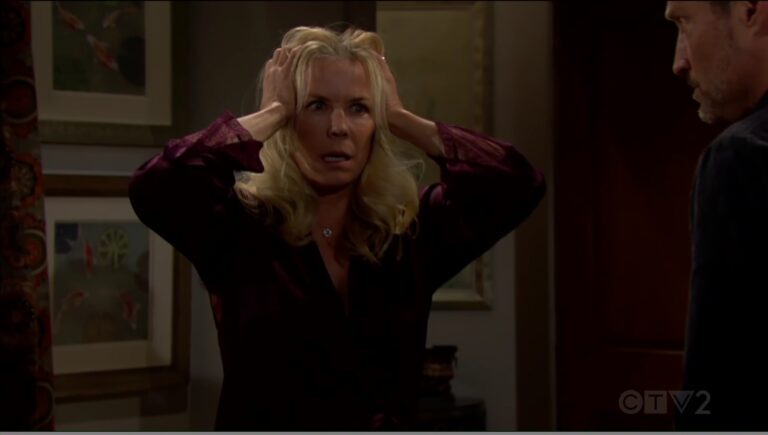 In the Monday, January 3, 2022, full episode recap of CBS’ Bold and the Beautiful, Brooke wakes up with Deacon and wonders what happened as Ridge flies back into LA, Carter and Paris discuss their kiss. We also have Thursday’s B&B recap where drunken Brooke and Deacon were seen making out and Carter shared a kiss with Paris.

Ridge is jetting back to LA. He sends Brooke a text saying how much he’s looking forward to seeing her.

Brooke wakes up groggy in bed and is shocked to find Deacon smiling next to her. “Morning sunshine,” he says. She leaps from the bed. He insists this isn’t what it looks like. He never got under the sheets and nothing happened between them. Brooke’s head is pounding. “Oh my God! I was drinking last night,” she realizes as she grips her hair.

They head downstairs and start cleaning up as she tries to remember what happened. He reminds her of all the vodka shots and repeats that nothing else went down between them. “We kissed,” she remembers. He confirms it but says it was nothing. Brooke tells him he can’t be there anymore. Deacon thinks she’s overreacting and he was a complete gentleman. They didn’t do anything wrong. “I did,” she points out.

Ridge pulls in outside and Brooke tells Deacon to go and never come back. As he runs out the back door, Ridge rushes in the front and throws his arms around his wife. Sitting on the couch, he tells her about his visit with the prince and his wife.

As Ridge rambles, she keeps remembering what happened with Deacon when she woke up. When she starts to sob, he apologizes. Brooke insists he has nothing to apologize for and claims she just doesn’t like it when he’s not there. They kiss and she looks worried. He tells her that they can face anything together. After kissing her, he suggests he take a shower before removing her robe.

As Ridge showers, Brooke flashes back to her night drinking with Deacon. “What did I do?” she asks as she becomes more distraught.

Sheila paces her room and thinks about how she swapped the non-alcoholic champagne label for an alcoholic bottle and sent it to Brooke.

Deacon heads to Il Giardino and tests a bottle of the non-alcoholic champagne. As he downs a glass, Sheila joins him. He reminds her they aren’t supposed to be seeing each other. Deacon tells her that he was drinking non-alcoholic champagne with Brooke and the kids last night. She’s sure it must have been nice to help Brooke let her hair down, especially with Ridge out of town.

Sheila tells him that she paid Taylor a visit to thank her for letting her see her son and grandson on Christmas. He says she’s pretty great considering that Sheila shot her. She turns the topic back to him and asks if he’s going to let “bad news” Brooke tell him what to do. He’ll do whatever she says as long as he can see his daughter.

When Sheila pushes for details about last night, he’s adamant that nothing occurred and slouches off. She stares over at the champagne bottle and smirks. She guesses her plan must have worked and Brooke’s world is about to turn into a shambles. Taking a swig of champagne, she laughs.

At Forrester Creations, Paris thinks about her kiss with Carter last night. He shows up and says that losing herself in work won’t work. They need to talk about what happened. She dismisses this by saying people kiss on New Year’s. However, Paris admits she’s questioning what happened last night.

Things were moving too fast with Zende. Carter is such a caring guy. Even when she blew his life up by exposing his affair with Quinn, he still cared about her. She admires him for that. He admires her too. Neither of them expected to kiss. Carter reminds her that he’s friends with Zende and her and doesn’t want to complicate things.