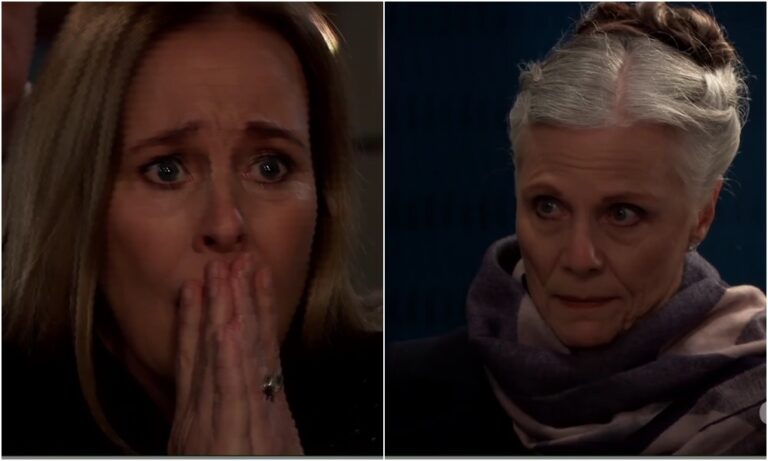 SoapsSpoilers’ General Hospital recap for the repeated Monday, January 3, 2021 episode. Today, Port Charles residents are still ringing in the new year, Peter wakes up and makes a terrible deal with Victor, while Tracy gets bad news about Luke. We also have this Thursday’s GH recap where Port Charles residents celebrated New Year’s Eve.

Alexis strolls into Charlie’s and the bartender pours the champagne. Harmony wanders up and complains about her daughter ignoring her after all she’s tried to get closer to her. She wants to be with family but thinks Willow still sees her as an embarrassment. Alexis likes this.

She’s so engaged in this that she forgot to drink her cocktail. She talks about how her daughters think she can reinvent herself but she’s an ex-con. “Get some water wings,” Harmony says. She has no sympathetic words to talk her off the ledge. She has to talk herself off the ledge. Harmony bets she hoped her daughter would stop her from drinking, which is why she came there tonight.

She talks about being in Shiloh’s cult and that she listens to prisoners while doing grunt work, hoping her daughter will trust her again. Alexis can see they’re both looking for answers in the wrong places. She distanced herself from everyone. Harmony reminds her she’s still there. Alexis thanks her and decides not to drink before Harmony takes off.

At the party, Laura kisses Kevin. Felicia and Mac stroll in and they embrace and discuss their trip. Nearby, Anna says Valentin went home to see if Charlotte and her friend were okay. Maxie was hard on her about Peter and asks for a fresh start. They embrace.

There’s nothing Anna wants more, especially since Peter’s no longer a threat. Felicia thinks it’s time to find her baby and bring her home. Meanwhile, Mac asks if it’s true that Cyrus found religion. They discuss her visit with Cyrus about him holding up his end of the bargain. Victor’s a free man. They’re both afraid of what that means. She hopes that he wants to stop Victor. Kevin turns talk to them celebrating alone. He flirts and they take off to her car, since it’s on standby. Later, Maxie hopes Anna and Felicia will be friends again.

Anna asks Felicia if they are friends again. Felicia says they always will be but she wishes she would have warned her before she let him go. She wants to team up to find Louise. Anna’s in. Felicia thinks there’s a lead they’ve missed. Maxie watches from the bar.

At the hospital, Britt stops Victor from going into Peter’s room. He wants to pay his respects. She thinks he has a lot to celebrate as a free man when his partner in crime will never wake up. Victor insists he isn’t now that he heard of his crimes. He brings up Jason’s name and taunts her.

He knows they shared something and sadly, he didn’t survive. Meanwhile, in his room, Peter moves a finger, grabs Austin’s hand and opens his eyes. Austin comes from the room and tells Britt and Victor that Peter’s awake and his breathing tube is removed. He wants to see Victor.

Victor suddenly doesn’t want to. Britt wonders if he’s the threat, not Peter. “Perhaps I can shake the tree a little,” he says and find something out about Maxie’s child. The guard pats him down and they give him five minutes with Peter. Everyone lets Victor into Peter’s room and Victor thinks he learned the trick on how to get back into the land of the living from his father.

Peter croaks. “You betrayed me.” Victor calls it business. Perhaps he can help him. He insists he’s the only person who can. They discuss who could want Peter dead. He offers protection and return needs to know how to get what he wants from Drew Cain. 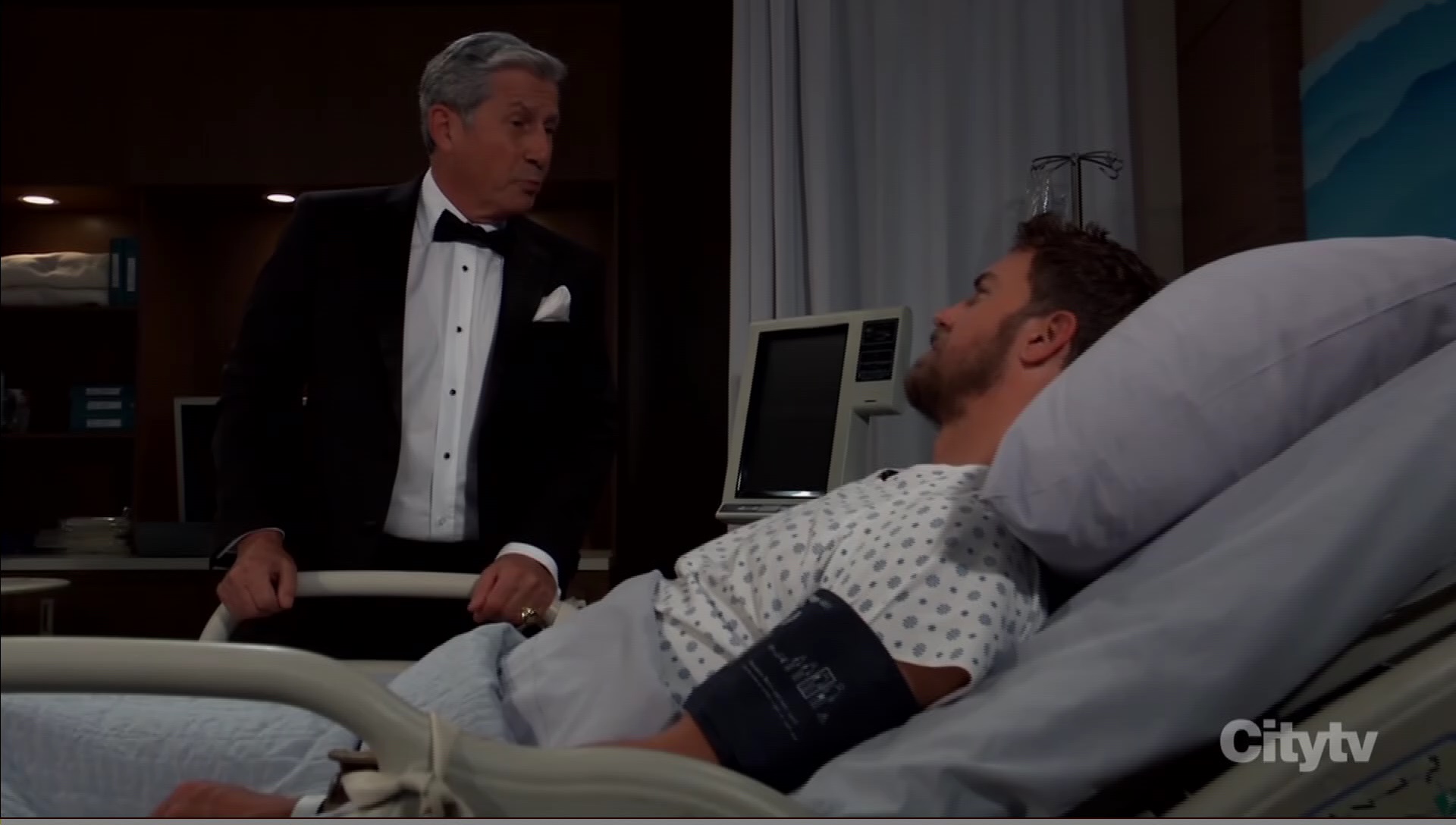 Drew finds Carly on the bridge. She almost thought he was Jason. Drew knows Jason found peace here. The magic is gone, and so is Jason, she tells him. Drew isn’t big on New Year’s Eve. He tells her how he celebrated this year by visiting Scout.

He calls it fun that he couldn’t have imagined six months ago. He guesses she misses Jason and offers to lend an ear. She bemoans that the person she always trusted is gone. Drew thinks she blames him for returning. He talks about how much he vented when Jason was quieter. Carly knows it wasn’t his style. Drew recalls the moment that Jason realized they had enough to bring Peter down. They became a team right then. Carly says it happened at a terrible price. Drew  asks if she blames herself for Jason’s death.

Nina drops Sonny off at home. He thanks her and goes to get a drink. She follows and he laughs. “I’m not going to drive drunk,” he tells her. She seems worried. He tells her he’s not going to make things worse because they can’t get any worse. “Hi honey, I’m home,” he yells. Nina looks around, uncomfortable. He tells her he bought this place for Stone 1994 when he was sick. Before that, he lived about his night club.

As he tells her his history, he wonders why he’s telling her anything. They get into it about Nixon Falls. She didn’t give him a heads up that Willow knew about them. Nina thought they were over. He drinks from the bottle and she urges him to stop. He’ll do what he wants. He earned it. Nina moves to leave and he asks her to stay. He wants to tell her about what happened with him and Carly after the bomb dropped.

She tells him it’s none of her business but he thinks it is. She’s part of this whole thing. She sits and invites him to share. He talks about how he caught up with Carly after court. He stops drinking and can’t go on. Nina comments on how he’s alone, without his wife in a place that doesn’t feel like home anymore, with a woman who isn’t his wife. Sonny wanted to tell Carly himself but he waited too long.

Nina asks if she can do anything. He yells, “Like what?” Tell Carly that they fell in love even though she knew who he was and kept it from her? Nina cries. Sonny backtracks. Carly can’t get past what he kept from her. She wanted to know if he was still in love with Nina. “What did you tell her?” Nina asks. There’s a silence, before Nina tells him she doesn’t want to know. She hopes he and Carly work things out. She leaves.

Back at the party, Mac gets a call from Britt. He learns Peter’s awake and shares it with everyone. They all decide to go to the hospital except Anna who has calls to make. She calls and leaves a message for Valentin. She tells him about Peter and thinks that they need to figure out their next step.

Laura and Kevin arrive home. They kiss until someone rings the doorbell. He wants to call her security detail but she looks through the peephole. She’s shocked at what she sees.

Back at the hospital, Britt and Austin wonder what’s going on in Peter’s room. “Are they planning world domination?” They talk about why they worked tonight. They didn’t have a better offer. Maxie, Felicia and Mac turn up. Austin fills them in and promises that Peter will not be a threat to her.

In Peter’s room, Peter asks Victor for Maxie and his baby in return. Victor nods before Mac gives him the boot.