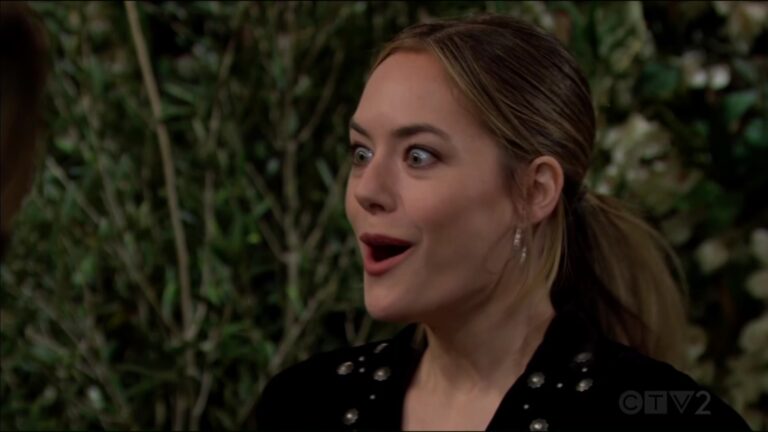 In the Monday, January 23, 2023, full episode recap of CBS’ Bold and the Beautiful, Brooke vows not to let Sheila get away with this, Deacon tells Hope he bought Il Giardino, and Hope’s thrilled for her dad.

We also have Thursday’s B&B recap where Liam and Hope encouraged Brooke to speak to Bill about Sheila, Sheila offered to leave if Bill wanted her to.

At Bill’s mansion, Brooke tells Bill his passionate love is too good to be drawn into Sheila’s darkness.

Sheila grits her teeth and tells Bill that if he wants to leave her he can but it has to be his decision, not hers.

She says they all want to change him and then starts whispering that he’s the man she’s waited for her entire life.

Brooke insists that deep down, this isn’t what he wants.

Brooke lists off all of the people she shot and Sheila calls the last one an accident.

Brooke reminds her she pulled the trigger and ran.

She tells Bill that Sheila being free means she’s a danger to people he cares about. She wants Bill to trust her.

She’s glad he came to his senses. Bill knows Sheila being there doesn’t make sense but it’s what he wants and needs.

He looks down and Sheila clasps his hand as Brooke’s mouth opens and closes like a fish out of water.

She repeats herself again about Sheila using him and being a danger. Sheila yells at her to shut it and to stop manipulating Sheila.

Brooke yells at her to shut up and let Bill speak. Sheila says he wants her to speak for him.

Sheila starts throwing stuff Brooke’s done in her face and Brooke goes after her again.

Brooke clutches at her face, exasperation etched on her face.

Sheila calls them all hypocrites. She doesn’t think Brooke can stand seeing Bill love her.

She needs to learn to accept it. Bill starts to cry when Brooke yells at him to talk for himself.

He says there was nothing he wouldn’t have done for her and Katie.

They trampled on his heart and Sheila’s what he needs. Sheila says she supports and loves him. Brooke cries.

She can’t believe this is happening and she won’t stop until she gets through to him.

She won’t stop until Sheila’s rotting in prison. She yells it again as she exits, slamming the door behind her.

At Il Giardino, Deacon and Paul talk about how Deacon hasn’t slept in days.

He’s been waiting for a break like this for a while.

Hope arrives and he welcomes her to “Deacon Sharpe’s Il Giardino.”

He talks about scraping together the amount for the downpayment and talking with investors.

He thinks he’s finally found his niche after looking for years.

Hope’s so proud of her dad.

He invites her to dine but she wants to talk about Sheila going free.

Nobody seems to be able to get through to him. It’s like he’s lost. “Yeah. Billionaire problems. That’s rough.”

He’s arrogant and has “chronic jackassery.”

Hope says he’s protecting her because he cares about her. They’re together. Deacon’s rocked by that news.

He doesn’t get how it’s possible and has a million questions, none of which she can answer.

They think something is wrong with him. I mean, what kind of person would have feelings for Sheila Carter?

Deacon winces. He makes a drink and tries to grasp Bill in a relationship with Sheila.

Once Hope’s gone, Deacon drinks to Sheila, who actually did it on her own.