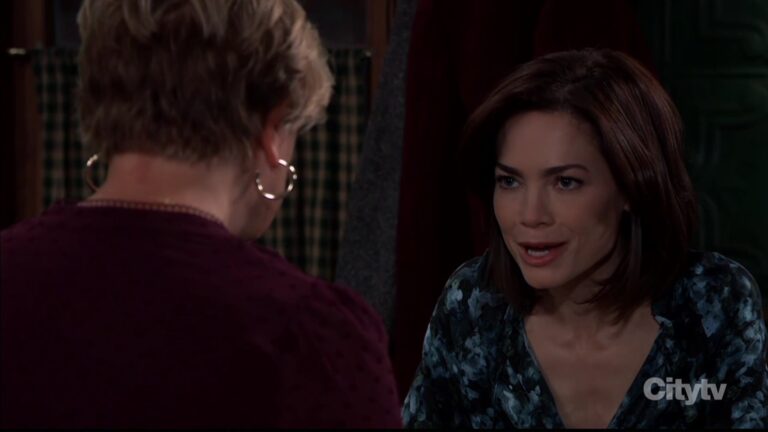 General Hospital recap for Monday, January 23, 2023. In today’s GH episode, Ava recognizes Mason from the night she was attacked, Laura urges Nikolas to let Esme be a mother, and Carolyn pays Liz a visit.

We also have Friday’s GH recap where Cam caught Joss and Dex together, Victor told Nikolas to move off Spoon Island, and Mason threatened Georgie.

Cam shows up at Joss’ dorm room and catches her with shirtless Dex. He asks if the other man is the reason they broke up.

Joss is in tears. Cam wants to leave but she asks him in so they don’t have to do this in the hall.

“Look man, I’m sorry,” Dex says. Cam assumes they’ve been laughing their asses off about how clueless he is. He has no idea what she’s capable of.

He tries to leave but she bars his exit.

After Dex leaves them alone, Joss wonders why Cam is there. He thought she might need him given what is happening with Willow.

She tells him they are over and she doesn’t owe him anything.

“Did you at least wait until after we’d broken up before you slept with him?” he asks.

She admits it, explaining she was attacked by the hook by Britt saved her life.

He’s sorry she went through that. She explains that Dex scared the hook off and then they slept together.

She refuses to admit that she lied to him and insists none of this was about Dex or about what Esme did.

Cam accuses her of breaking up with him so she wouldn’t have to feel guilty about sleeping with Dex.

She’s sorry but asks him not to tell anyone about her and Dex.

Spencer returns to Sonny’s penthouse, talking to a realtor on the phone about a new house.

When he gets off the line, Spencer tells his uncle he needs to find a home immediately.
Sonny worries about what he’s planning.

Spencer explains that he’s planning to sue for custody and has to have a house and nanny prepared.

Sonny tells him how important it is to emotionally support a child. It took him a long time to learn to do that and to make a child feel safe.

It has to be all about them. Spencer needs to ask himself if he’s ready for that.

The Cassadine knows he needs to figure things out, but he wants to save this baby from being betrayed by his father.

Dex shows up. Spencer tells “errand boy” to go polish a fender. Sonny sends him out.

He tells Spencer he’s proud of him wanting to protect the baby. There’s a lot of his mom in him. If he takes this on, there’s going to be a fight with Nikolas.

After Spencer exits, Dex returns. Sonny asks him what he has to tell him.

Laura startles Nikolas when she arrives at Wyndemere. He just received the settlement agreement for his divorce.

What makes it even more difficult is that Ava is getting Spoon Island. Laura is perplexed. He justifies Ava’s rage.

She tells him it would be a mistake to cut Esme out of the child’s life totally. Laura thinks she deserves the chance to be a mother.

She visited her in the hospital and she seems to think Spencer is the father. He’s still hoping she won’t get her memory back.

Laura walks out to take a call from Liz and then departs.

Dante arrives at the penthouse. He and Sam have some alone time. As they kiss, he remembers he has to visit Heather. She wants to go along.

Sam was hoping that asking Esme about Maggie might jog her memory. She suspects that she may have made contact with her father and he hired the hook.

At Spring Ridge, a patient, Ramona, threatens Esme for sitting in her seat.

Heather pops up, pushes a shiv against her back, and warns her away. Sitting down with Esme, Heather tells her not to worry again.

She hands her a friendship bracelet and tells her she’s under her protection now.

The moment she saw her she could see they were the same deep down. Esme doesn’t know what she feels and wonders if she really killed all those people.

Heather suggests she may have had a good reason, like protecting her child. Esme is sure she’s a great mom.

“I do my best,” Heather says. The baby kicks and Esme gets jumpy.

Heather tells her how miraculous it felt when she first felt her baby kick. She understand how scared she feels but is sure she’ll be a natural.

Heather assures her the cops will soon realize there’s no way she could have been the hook.

Dante and Sam arrive and are curious when they spot Heather and Esme chatting. The cop asks Heather to step away to talk.

Esme tells Sam she’s not supposed to talk to the police. Sam says she’s a PI and is sure she’s not the hook. She thinks she deserves to know who she is.

Esme is clueless but Sam thinks someone could help. She brings up her nanny but Esme has no idea what she’s talking about.

She’s not sure she wants to remember. Sam suggests her biological father could be in New York State and offers to try to find him.

Esme can’t pay but Sam offers to do it for free. “Let’s do it,” Esme agrees.

Dante reminds Heather that she’s only there because of the deal she made with Robert.

She tells him Ryan asks about Esme every day. She’s going to act as the translator between them and let the cops know what they say.

The cop gives her a week to get something.

When they return to Sam and Esme, Heather’s eyes go wide when Esme mentions what Sam just offered to do.

Carolyn startles Liz when she shows up at Kelly’s. She’s there for work but also to try reuniting with her daughter.

Liz wants to go but her mom begs her to stay. Carolyn suggests he try talking to contextualize her trauma.

Liz reminds her she’s not her shrink and asks why she stayed with her dad after all his affairs.

Her mom chose to focus on the life they were building together. Liz doesn’t understand how she could forgive him.

Carolyn loves him. “More than you love me?” Liz asks.

Her mom claims she did what she thought was best in an impossible situation. When she gets up to go, Liz asks her to stay.

She isn’t forgiving her but she understands that people can do things under extreme circumstances. Her mother will be in town for a few says.

She tells her daughter that few things are truly unforgivable and walks out.

Laura shows up and Liz fills her in on her mom being in town.

Carolyn arrives at Wyndemere. Nikolas asked her to come to town.

In his office at General Hospital, Austin grabs Mason by the lapels when he threatens Georgie.

Ava interrupts and recognizes him. She remembers that he was there when she was attacked.

He claims he wasn’t there. Austin encourages her to elaborate. She remembers seeing Mason at the Quartermaine picnic.

Mason chews on his lollipop nervously and gets defensive. His cousin ushers him out.

Once he shuts the door, he thanks Ava for her help but suggests she not get involved.

Sitting, Ava asks what his cousin has on him. He claims it’s old family business. He’s determined to live far away from the Gatlins.

After he gives her a referral to a plastic surgeon, she tells him how it was to be part of a crime family. He tells her he had a great childhood until he lost his father. He’d of wanted him to stand his ground, so that’s what he’s going to do.