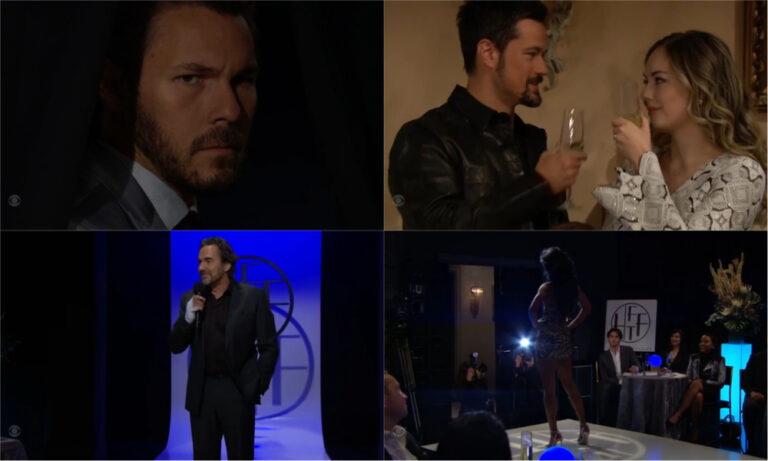 This week on The Bold and the Beautiful, everyone was talking about Hope for the Future’s latest fashion show and how important it was to the financial success of Forrester Creations.

Apparently, Hope’s fashion line is on the verge of extinction! Who knew?

Like so many other important plot points of late, the news of HFTF’s precarious position just fell from the sky on the day it was needed.

I’ve made no bones about my dislike of business stories on soaps, mainly because the plots are comprised of scenes with characters talking about things that we don’t see, like spreadsheets, mergers and takeovers.

But the Forrester dynasty is built on the fashion business, and that puts B&B in a unique position when it comes to telling their business stories.

We can see fashion and we mostly understand it.

There are regular on-screen reminders of what Forrester business is – reviewing new designs, models wearing gowns to be fitted and big fashion shows with lots of characters involved.

It makes the family business seem alive and real in a way that the DiMeras, Newmans and Quartermaines can’t compete with.

The latest Hope for the Future event was lacking in comparison to iconic past B&B fashion shows that were chock full of excitement.

But it wasn’t just that.

It was that very little happened at the HFTF show.

For instance, Ridge and Brooke were in the same room for the first time since he walked out, but they barely look at each other!

At the very least, they should have locked eyes and each had a romantic flashback to another fashion show.

Katie was there wrangling the press and told Carter how excited she gets before a show.

Why not have Carter and Katie dash upstairs for some post-show sexy time?

They sneak up to the design room and get frisky, only to have the creepy Hope mannequin fall right over on them!

Just like that, Carter and Katie are part of a story that’s finally taken a small step forward.

B&B needs to get back to treating their fashion shows the way other soaps treat weddings – a chance to mix characters and advance story in a lush backdrop.

For me, good soap opera is all about the little details and the history of the characters as we know them.

We all know that neither has been B&B‘s strong point lately!

In the case of HFTF, there should have been little tidbits of information scattered through the weeks to build up the excitement for the upcoming show.

Thomas could mention he can’t get fabrics because suppliers don’t trust they’ll be paid.

Steffy could be worrying that the money invested in HFTF will cause problems for Forrester Creations.

Katie could have trouble getting press to cover the show because it’s been decided that HFTF is passé.

Then, when they all work their butts off and the show is a triumph, we can cheer our favorites for their hard-won success!

The Trickster & the Love Fool

If you’ve ever been on the receiving end of unwanted romantic attention, you know how cringe it is, especially when that not-so-secret admirer won’t let up.

Now imagine that person also told you your baby was dead and tried to kidnap you!

I know that many of you have also suffered from abuse and I’m so sorry for that.

It must be incredibly difficult to watch an abuser trick his victim into being close to him.

It makes no sense and only serves to make Hope look foolish for trusting Thomas over Liam and Brooke, who’ve been right about Thomas all along.

I just can’t imagine how Hope would ever get over what Thomas did!

It’s a bridge too far for me.

What do you think?

Undermining another marriage for kicks.

Another constant storytelling trend on B&B is that every marriage is just one relatively minor incident away from total destruction.

This week was Liam and Hope’s turn to go through the shredder, with help from Thomas was whispering in Hope’s ear and sowing seeds of doubt about Liam.

Pretty much the same thing Thomas did to Ridge!

Liam is right, Hope is right

The thing is, Hope is right to be upset that Liam isn’t there.

Just as Liam is right to be upset about Thomas always being around.

But this situation is something that a couple should be able to talk about and work through.

Wouldn’t that be a welcome twist?

Did you catch the moment in Friday’s episode when Hope was talking to Liam on the phone and Thomas was standing close by?

Just as she hung up and turned to Thomas, he was pushing a button on his phone and pocketing it.

Do you think Thomas was recording Hope’s side of the conversation to use later?

I’m expecting that Thomas will also record Liam and crunch both of their voices through his magical voice imitation app for future use.

Maybe he’ll send Hope a voice message from “Liam” making it seem as though he’s left her or vice-versa.

We’re way overdue for a heated conversation between exes Liam and Steffy about what’s going on with her brother and his wife.

After arguing, Liam and Steffy could realize that neither of them wants another go-round of Thope!

But Liam doesn’t want to be part of a scheme, so Steffy decides that she’s going to sacrifice HFTF to save Thomas!

Another point of bother is the way that Zende and Finn, both successful men in their own rights, only get brought out of storage to cheer other folks’ achievements and stand to the side.

Such a waste of dramatic potential!

Zende needs a life of his own, maybe, hanging out with sketchy rich kids and living a sometimes dangerous life his family doesn’t know about.

I don’t even know where to start with Finn.

What was the point of bringing him back from the dead?

Finn got more airtime and story as a corpse!

Bill, to Liam: “Douglas is a kid. And since when do kids call the shots?”

What do you think? Will Lope die so Thope can live?

Was the Hope for the Future show as exciting as you expected it to be?